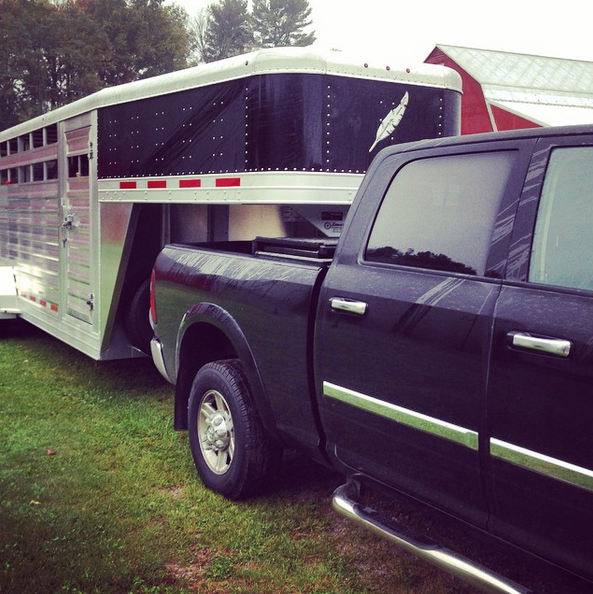 Kristen Kovatch recently acquired her first imported horse… from Canada. Here’s her tale of the import process, including what you’ll need to bring your own horse down over the border.

Well, Horse Nation, I’ve gone and done it again, adding yet another horse to the family herd I affectionately and not inaccurately the Land of Misfit Toys — my first venture into the world of OTTBs, “Jobber Bill,” a 2009 Canada-bred chestnut gelding, came home on Monday afternoon. But before I can tell you that story, I have to tell you this story: the surprisingly uncomplicated process for importing a horse into the US from Canada.

Prior to starting the research for this process, I imagined that importing would involve mountains of paperwork, months of bureaucratic wrangling, intense veterinary scrutiny, plenty of expenses and probably a stint in some sort of quarantine facility, not to mention perhaps some sorcery or fortune-telling to make sure the stars were in fact all perfectly aligned to actually bring a horse into the US. And perhaps if I were bringing a horse in from overseas or from a country with a noted threat of transmissible equine disease, that may have been the case.

To my pleasant surprise, after a bit of research and some consultation with a friend who as professional hauler routinely ships full loads of horses over the border, bringing a horse from Canada permanently into the United States is relatively simple. The following information is based on both my own research and my own experience and should not replace contacting your intended port of entry if you are planning to import a horse. Requirements may vary by port.

Things you will need:

Things you will not need:

*I would imagine that if the USDA veterinary inspector saw something he did not like, he could choose to detain a horse at the facility or send it back to Canada. As a rule, however, there is no Canada-US mandated quarantine.

The USDA Animal & Plant Health Inspection Service does not operate a border inspection at every port of entry into the United States — fortunately, our nearest port of entry in Buffalo, New York is one of the designated animal import/export locations, and we crossed the border at the Lewiston Bridge Complex where the APHIS facility was located. There are two other ports of entry in Buffalo — the Peace and Rainbow Bridges — but only Lewiston has the animal inspection facility.

Both the APHIS website and my commercial hauler friend emphasized the importance of making an appointment for the APHIS inspection 72 hours prior. I called the office on Friday to confirm that I would be coming in with a horse on Monday, but the presiding veterinarian there told me an appointment was not necessary and that he would see me whenever I got in within business hours. Making an appointment is still recommended as a rule, especially as individual ports may have their own additional requirements — whether this particular facility simply wasn’t busy that week, or because I was only traveling with one horse rather than a full trailer load that I didn’t need a scheduled appointment I’ll never know.

If you are traveling with a large load of horses, my hauler friend recommended having a binder with each horse’s documents clearly labeled and separated all ready to go to make it as clear and easy as possible for both customs and the APHIS inspector. With just one horse, I simply carried my packet around for the agents and veterinarian to peruse, but other shippers coming into the facility at the same time as me did have their passengers’ paperwork well-filed in accordion folders.

Rules and requirements may be slightly different for horses entering the US on a temporary basis, such as for racing or showing. As always, I encourage you to research and contact the APHIS inspection facility at your intended port of entry for individual requirements prior to scheduling your import. 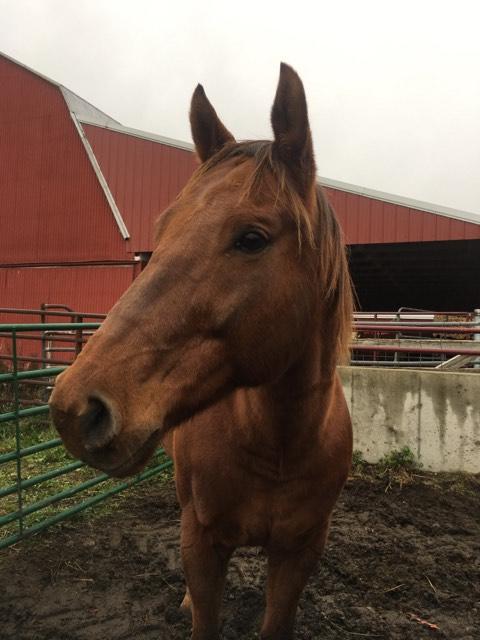 Jobber Bill, finally relaxing at his new (if slightly damp and muddy) home in the US. Photo by Kristen Kovatch.

Jobber Bill’s seller had the Coggins and four copies of the stamped health certificate all ready to go for me when we picked him up on Monday morning. We had a fairly narrow window of time to work with — the APHIS facility at Lewiston is only open Monday through Friday from 8 AM until noon and 1 until 2 PM. I wanted to make sure we had plenty of time to navigate the border crossing back into the US with Jobber in tow… which was how we had found ourselves departing from the farm that morning at the ungodly hour of 4 AM.

I blame the early hour of my rising on my interaction with the Canadian border patrol somewhere around 5:30 AM as we rolled up to the truck/trailer booth. “There’s no one here!” I said out loud, looking at the apparently deserted booth.

“Um… he’s up there,” murmured my sister-in-law and ever-loyal sidekick/horse enabler Kaitlyn, pointing up to a tower-like booth clearly designed for actual semi trucks. I beamed up idiotically at the border agent, who must have inwardly sighed as he motioned for me to turn off the engine and step out of the truck, leaning Rapunzel-like out of his booth to grasp the passports I handed up to him on my tip-toes.

From there, the rest of the trip into Ontario was smooth: we arrived at the farm ahead of schedule, loaded our new Thoroughbred without incident and began the trip back south, noting that traffic into Lewiston Bridge had certainly picked up now that it was mid-morning and the rest of the world was actually awake and moving around. We filed into the slow lines of cars heading into the customs booths and patiently waited our turn.

Well, except for Jobber, who had decided at that point that waiting in line was stupid and began to paw at the walls of the trailer, setting the entire rig to rocking slightly and entertaining/terrifying the other drivers in line around us, who apparently believed we were hauling a velociraptor. Fortunately, our good-natured border agent was amused by this even as I screamed “JOBBER!” out the window over his head to get the horse to quit before he hurt himself.

We pulled off into a side parking lot to report to customs so the agents could check out our paperwork and make sure all was in order before sending us on to the APHIS facility. As a private citizen bringing this horse home for personal use, I had gone through the regular automobile line; commercial haulers were presumably going through the commercial trucking lane.

The APHIS inspection facility was another two exits down the highway, so with two copies of our health certificate now on file at the customs office, we headed down to our next stop, welcomed into the tiny office space by the well-bundled-up veterinarian who apologized for the fact that the heat was out in his office. Through the window I could glimpse a series of gates and panels set up for handling livestock and imagined that the place could get pretty busy with commercial cattle shippers coming through.

The veterinarian processed our paperwork, kept another copy of the health certificate and then came outside to the trailer to do his inspection. Initially, I had been a little anxious about this, even though Jobber was in perfect health — what if he happened to have a snotty nose or a weepy eye from picking up road dust along the journey? Fortunately, the actual inspection was pretty painless, despite Jobber’s tangible excitement about the arrival of two shiny air-ride commercial horse haulers gliding into the parking lot for their own inspections. One, we found out, was bound for West Palm Beach, which made pretty much all of us in the chilly heat-less office a bit jealous.

Easing the rig back onto the highway with our certificate of inspection now stapled to the Coggins and health certificate, I gave myself a mental high-five. I had imported my first horse! Perhaps it wasn’t quite the same as shipping in a warmblood from Europe, but it was an accomplishment in my mind all the same.