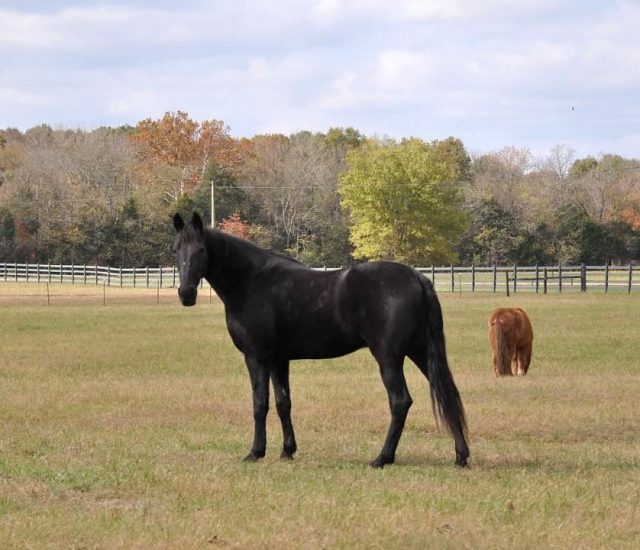 “Theo is a dramatically different horse from the one that I met and began to chronicle almost two years ago.” Candace Wade brings us the latest update from the life of Theo, the rescued former “big lick” Tennessee Walking Horse.

Theo is a 16 hand, statuesque, glossy black ex-big lick Tennessee Walking Horse. He was surrendered still wearing a set of heavy shoes on the front complete with shoe bands to hold them in place. The back feet had hind shoes with caulks (protrusions). All feet had been masked in black spray paint and reinforced with a Bondo-type filler. The preparation concealed the condition of his shattered feet. Theo is 26 months into recovery — the result of about $18,000 and hundreds of man hours of care and physical and mental rehab. Theo is a dramatically different horse from the one that I met and began to chronicle almost two years ago.

Theo is a horse in process. He has finally learned to relax while out in an open pasture. His feet have become sturdy enough to risk being barefoot. Ed, his rescue/rehabber, is still concerned about Theo’s coffin bone dropping through the thin soles, but he chooses to take calculated risks. The soles seem to have toughened. Ed believes that the sidewalls have grown enough to keep the soles from having close contact with the ground. The question in all equine rehab: do you keep them under glass or take a deep breath and release them to be horses?

Theo is no longer frightened by the horses on the other side of his fences. He ventures a sniff and some grooming and has nipped back if anyone gets too pushy. Theo is being schooled by his new gal-pal, Molly. 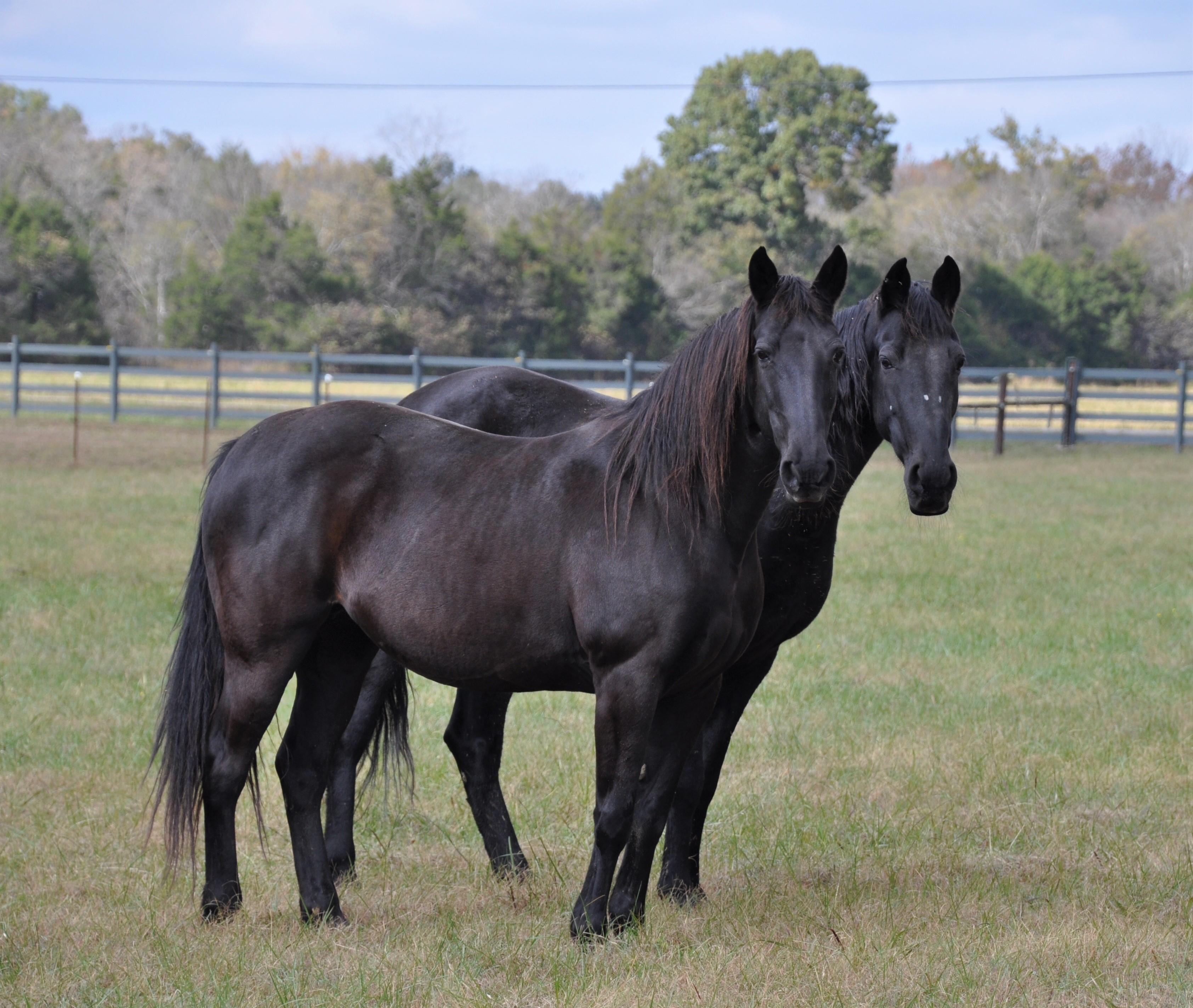 Molly (Unsinkable Molly Brown) is also a TWH. She is a survivor of the October 2016 slaughter truck crash outside of Knoxville, TN. Many of the horses had been hurled out of the open trailer transporting them. Eight of the 31 horses were reported dead at the scene from injuries. Two others were euthanized at the site of the crash.

Omega Equine Rescue of Pennsylvania responded to news of the crash. They raised money to purchase the survivors, took care of their medical needs, euthanized those that could not be saved and found forever homes for the rest. Ed took over Molly’s care.

Molly is a quality TWH. She appears to have been a brood mare. Her feet show signs of serious founder. This might explain why she was bound for slaughter. Thanks to Theo’s master-craft farrier, Molly is firm on her feet. Molly has an open expression, amenable nature and is sweetly curious.

One day, the resident pony zipped through the gate of Theo’s enclosure. Theo and the pony idled away the day — together — no confrontations. Until this meeting, Theo had avoided the other horses. After, he began to sniff one of the more docile geldings over the fence. Then, Theo began mooning over the fence at Molly. Ed said, “It was like Theo said ‘Hey, I can be out with other horses?’” 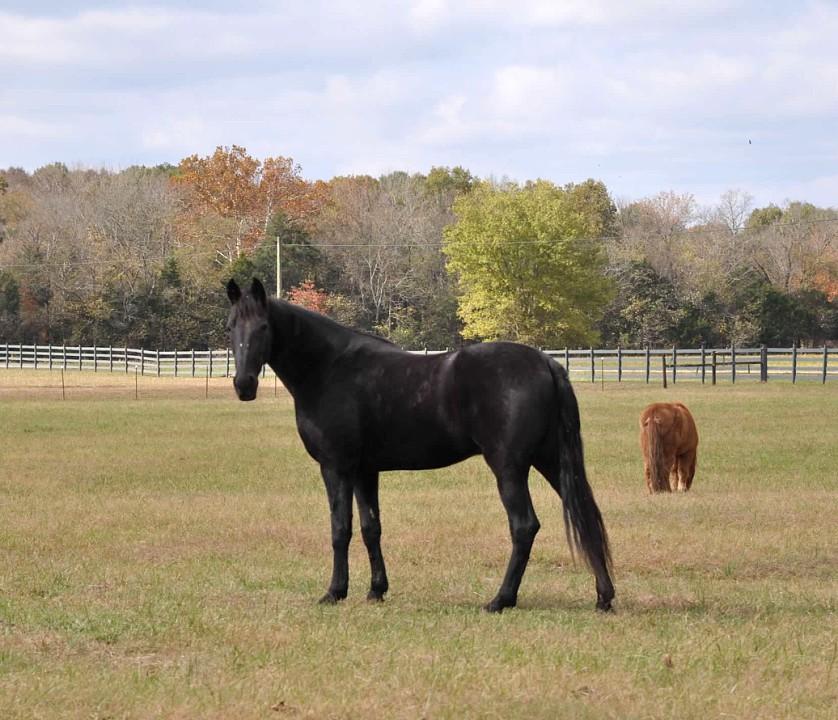 Theo and The Pony. Photo by Ilona Gerou.

“So I screwed up my courage and let Theo out with an old gelding, the pony and Molly.”  Ed continued, “Theo burst into an enthusiastic romp across the field with little shorter-legged Molly behind.” The first of many open-field sprints. He and Molly now enjoy splashing in the stock pond and rolling in the mud. Ed surmises that, as a former show horse, Theo was probably confined to a stall for most of his life. Based on Theo’s age and show record results, “at least 13 years had passed since Theo had any sort of space in which to move that resembled being turned out in the world. His contact with horses would have been restricted to staring from his stall across the barn aisle and during horse shows.”

“Theo is now a graduate of the horse academy of real life – with Molly’s guidance. When a kerfuffle started over the fence with another gelding, Molly moved in, turned her ample butt to the fence and let the offender know she was more than willing to kick his rear if he proceeded to be aggressive to the new kid on the block — Theo. Theo is also establishing his own place in the pasture hierarchy. He now herds the pony and nips his rump when the pony doesn’t move fast enough to suit him.”

Theo is a horse that has learned to bond. He is so charmed by Molly that he follows her every move, until she demands “me time” and pushes him off. Theo emotes. He “talks” from his stall when we are with Molly across the breeze way. Until Molly, Theo always walked right into his stall when turnout time was over. Last week, Theo followed Molly into her stall and had to be led back to his own. The next time, Molly walked into Theo’s stall. Theo followed. Molly slipped out — Ed closed the door — and Molly retired to her stall — alone.

Theo is learning to be a balanced horse. He is learning to form emotional attachments. He has learned to enjoy neck massages, red grapes, red pears, watermelon rinds and Uncle Jimmy’s Squeezy Buns.

Ed can’t yet judge if Theo will ever be a riding horse. Ed has observed that “now that Theo is out of pain, he shows signs of not being settled enough to be a dependable partner under saddle. There’s a lot more horsepower on display than there was when he first limped into the horse barn and stood like a statue for many, many months, trying to grow a new set of feet. Theo will always have coffin bone and hoof quality issues. At 15, with some rehab still required, no decisions have been made about whether or not to try to restart him under a non-performance saddle.” Theo may just spend the rest of his life being a horse, content in the field with his girl and the pony, loved and well tended.

Theo was royally bred. He started as a two, three, and four year old “big lick” performance Tennessee Walking Horse and later showed in park performance and show pleasure. He was foaled 5/08/2002, with a documented show record that began in 2004 and continued through 2012. He had three appearances at the Tennessee Walking Horse National Celebration in Shelbyville, TN. Theo was “Jose’s Rare Coin.” Now, Theo — Theodore — will be Theo, and belong to Ed, for the rest of Theo’s life. 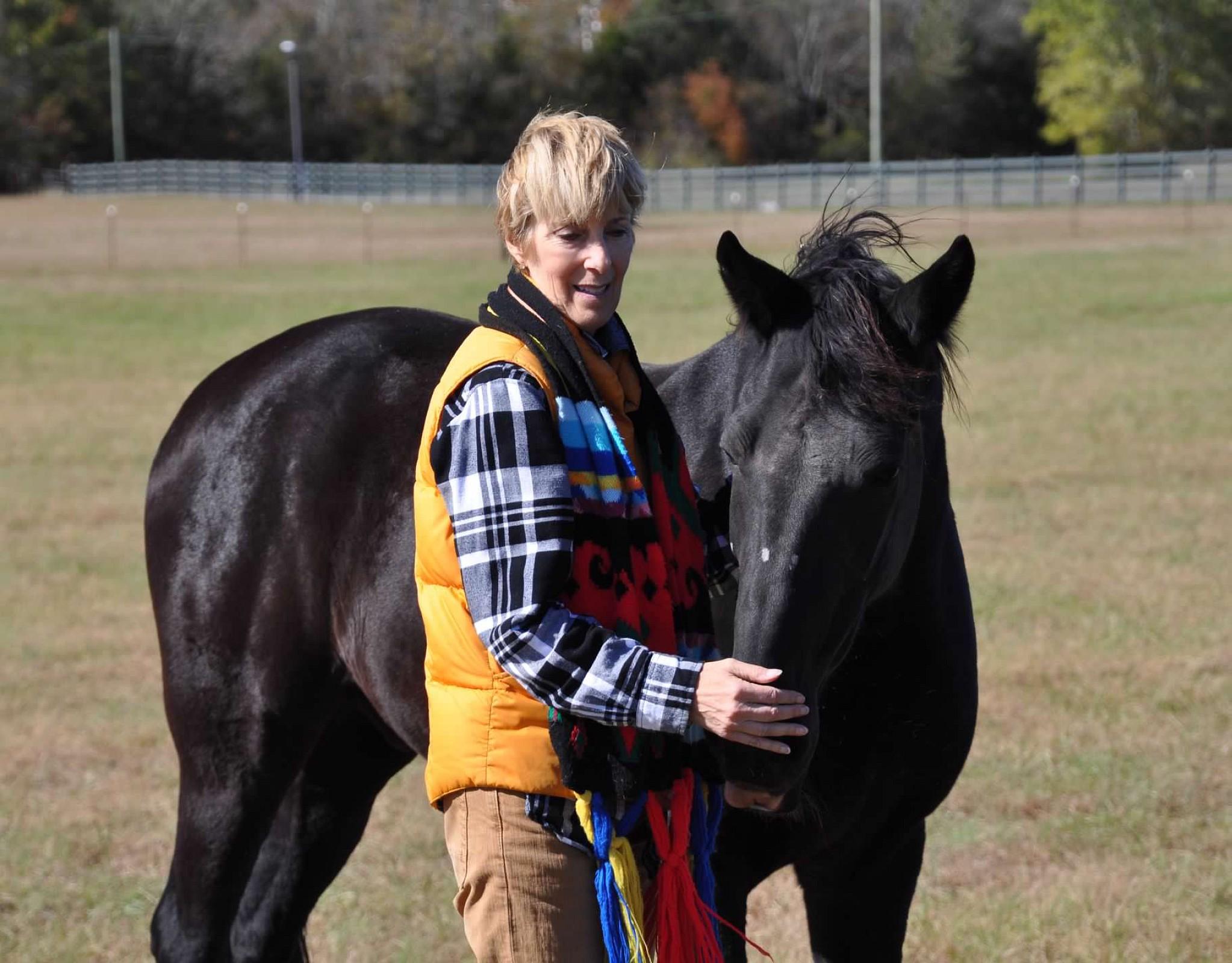 The author and Theo. Photo by Ilona Gerou.