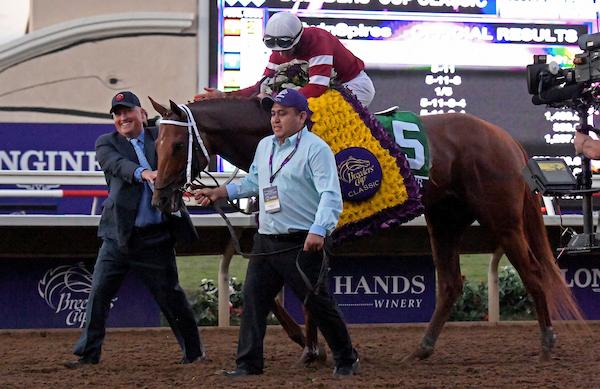 In case you missed it: watch likely Horse of the Year, Gun Runner, conquer the best of them in the Breeders’ Cup Classic.

At Del Mar, the seaside track just north of San Diego, California, the Breeders’ Cup Classic crowned a new king on Saturday: Gun Runner, coming off of a stellar four-year-old season with multiple graded stakes wins, achieved the biggest victory of his career when he roared home in the Classic before a crowd electric with emotion.

The Kentucky-bred son of Candy Ride jumped right to the lead and commanded the rest of the race, repelling the equally-game Collected through fast fractions. Collected fought hard for a well-earned second, trying one last grapple with Gun Runner in the stretch before fading. West Coast made a run for third, followed by War Story.

The much-touted Arrogate never fired, finishing in a dead heat for fifth with Gunnevera. Arrogate is already settling in at Juddmonte Farms, having been retired to stud.

Gun Runner is trained by Steve Asmussen and owned by Winchell Thoroughbreds and Three Chimneys Farm. While Gun Runner will ultimately retire to stand stud at Three Chimneys for the 2018 season, his connections have announced their intentions to run him in the Pegasus World Cup invitational race early next year.