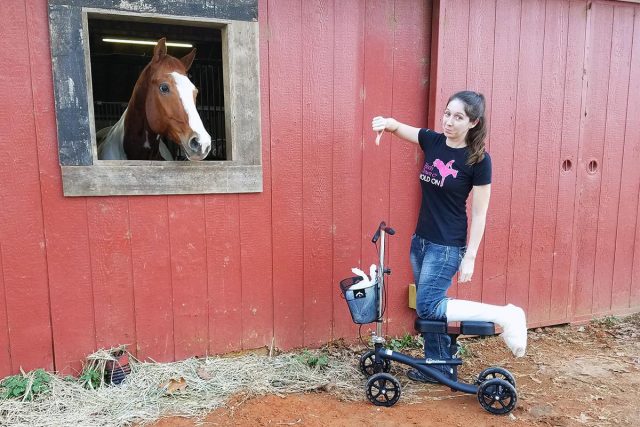 It’s been a long time since we’ve gotten a new update from blogger Ainsley Jacobs, who always finds the positive in every equestrian situation — Ainsley is finally back to detail what’s been going on over the past few months. 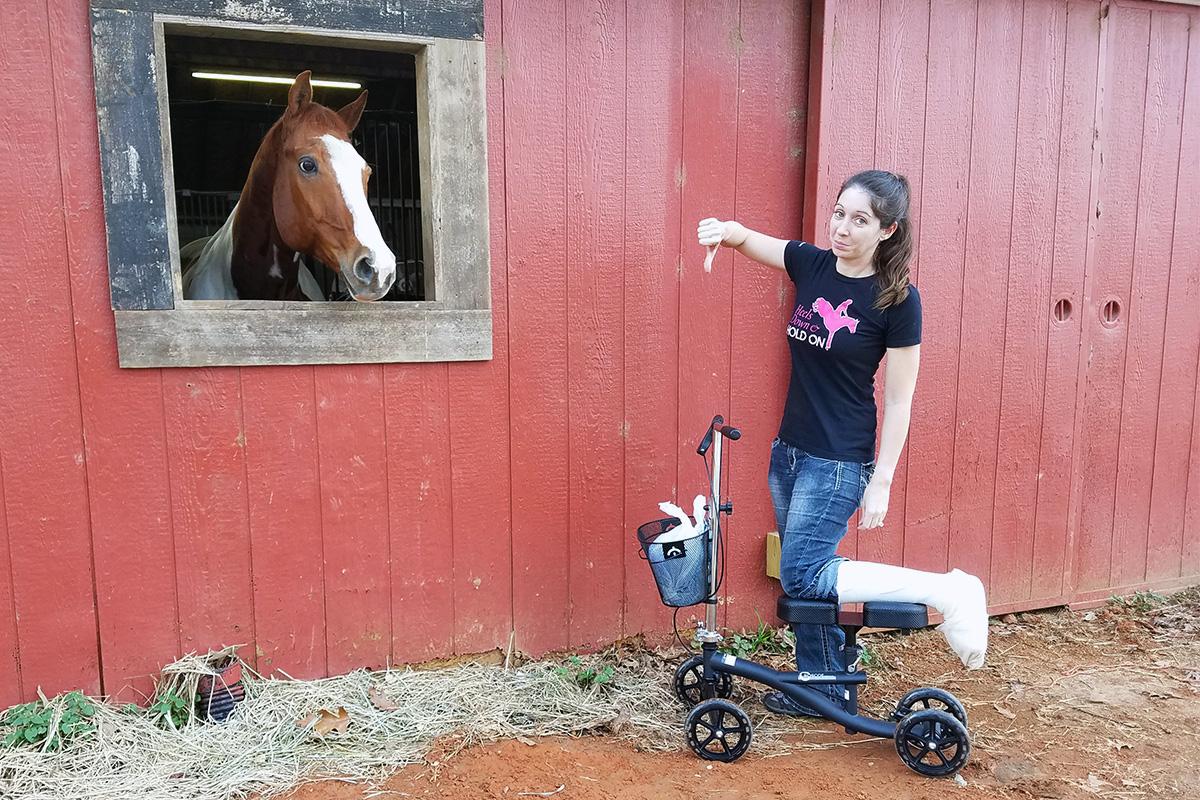 It’s been a almost a year since I’ve updated about my and JJ’s progress, and there’s a good reason for that – in a bizarre twist of fate, I wound up being put on stall rest, too.

Because of lawyers and litigation, I haven’t been able to talk publicly about anything that’s been happening, but that’s finally all finished. This is going to be a LONG entry, so I’m separating it into two posts…

JJ’s rehab had been going really well and we were up to 15 minutes of trotting each day, but after several weeks, his behavior changed drastically and he started bucking and kicking out when I asked him to move forward.

The change coincided with a farrier visit, so we called the vet and everyone assumed that JJ had simply been trimmed too short and was uncomfortable. A shoe change and a few weeks of waiting to let him grow out was prescribed, but JJ didn’t improve. Oddly enough, the lameness was in his hind end this time – NOT in the front where his previous collateral ligament injury back in April had been.

The vet came back out to run some more diagnostics and found what seemed like inflammation in JJ’s left hock. We opted to do a set of hock injections, guessing that his body was a little angry after having been dormant for so many months and then getting back into work.

Literally the very next day, November 30, 2016, I was involved in a serious car accident. I was stopped at an intersection waiting for oncoming traffic to clear so that I could make a left turn into my subdivision (I was on the way home from the post office where I had shipped some Ride Heels Down orders, ironically) when another driver on the opposite side of the road suddenly crossed into my lane and hit me head-on.

It was absolutely terrifying seeing him coming towards me because I knew it was inevitable that he’d hit me and I had no choice but to sit and wait for it to happen. The impact was severe, my beloved ’93 Mazda Miata was totaled, and I wound up breaking two bones in my left foot. Thankfully, the other driver was okay and I escaped without further injuries – it could have been a LOT worse, and I’m grateful every single day that it wasn’t.

A trip to the hospital emergency room and later to an orthopedist revealed the breaks were bad enough that they required surgery. The first one was scheduled for December 15, 2016, and two titanium rods were inserted from my toes to my ankle to stabilize the bones as they healed. A second surgery was done on January 30, 2017, to remove the pins. 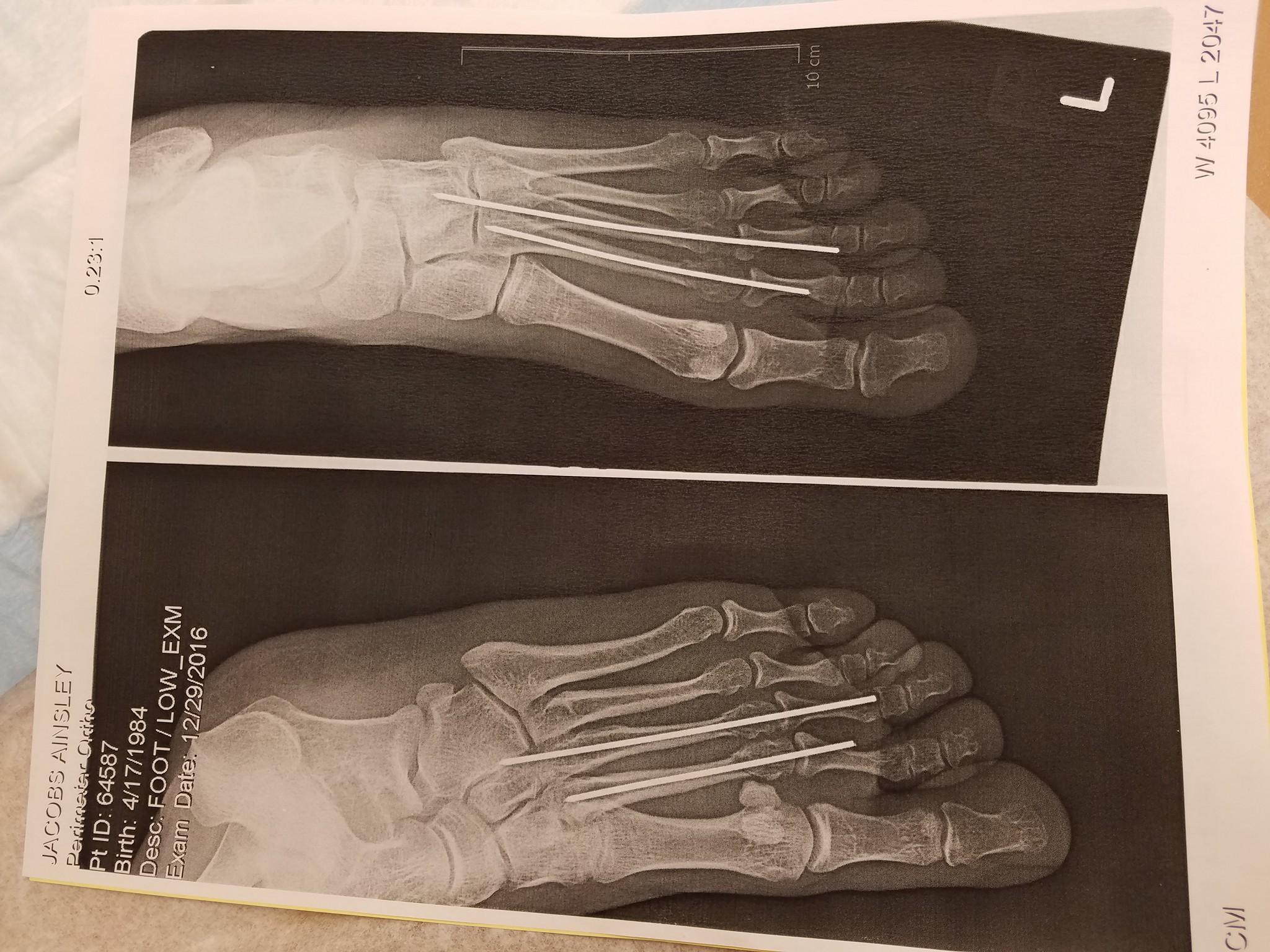 A rider’s nightmare. Photo by Ainsley Jacobs / Ride Heels Down

Meanwhile, JJ’s hock injections had failed to remedy his resistant behavior and we were all stumped. The vet decided to play it safe and put JJ on a two-week regimen of anti-inflammatory medication with the plan being if that didn’t work, then we would call in the big guns.

Fortunately, the meds and another two weeks of stall rest seemed to clear up the mystery lameness and JJ was approved to begin rehab again in mid-January. Unfortunately, as this process of resolving his secondary lameness took over three months in itself, all of the forward progress we had made initially was lost and he had to start all over again.

Since I was unable to walk, I spent nearly three solid months doing literally nothing – doctor’s orders! As I work from home for my day job, I was lucky that I didn’t miss a beat. I was in a ridiculous amount of pain (pain killers and my body don’t get along very well, so I can’t take them) and bored out of my mind from being so stagnant, but slowly improved and eventually started my own rehab on February 14, 2017.

Through it all, I was absolutely heartbroken that I could neither ride nor get to the barn to visit JJ. Luckily, I’ve got an amazing group of friends at Go With It Farm who cheered me up by sending constant updates and pictures of JJ and his shenanigans. They even conspired to surprise me in early February and BROUGHT JJ TO MY HOUSE to visit! It was SO thoughtful and totally the best present ever. 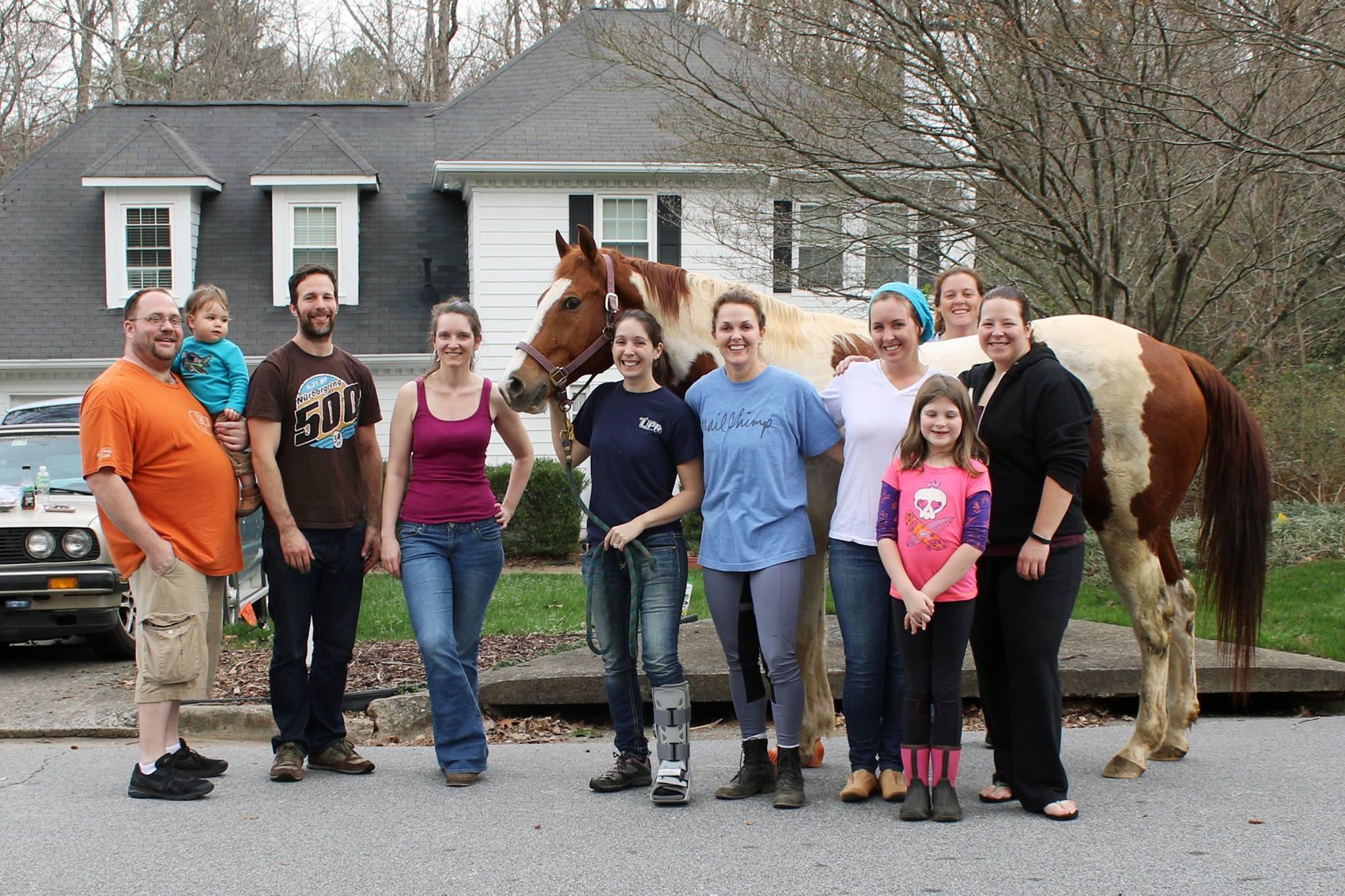 Surprise! JJ and my amazing barn family came to visit me at home. 🙂 Photo by Ken Milner / Go With It Farm

During my stall rest, my wonderful husband, Erik, took care of packing and shipping all the Ride Heels Down orders while GWIF owner Halliea and assistant manager Beth helped out by continuing JJ’s rehab for me.

Long story short, I was cleared to start riding again (flat only) on March 5, 2017. I was actually really nervous to try, because I wasn’t sure if I’d even be able to since my foot had broken right where the stirrup goes. I tentatively tacked up, mounted, and got on my pudgy pony to test things out. Incredibly, I had only a little pain and was able to get his rehab ride done without any issues.

Two days later and almost one full year since his initial injury, the vet came to do a follow up and officially deemed JJ “sound” – woo hoo!! The bad news was that he had packed on nearly 200 pounds that he needs to lose before we are allowed to canter, but that’s totally something we can handle.

Now, we’re working towards getting back to our former fitness levels. JJ and I BOTH need to go to the gym… him to lose weight and me to rebuild all of the muscle I lost due to my accident – I lost 2″+ in diameter from my left calf muscle due to atrophy. But hey, that’s something we’re going to work on together, because we’re a team. Team Lame.

To be honest, other than the obvious “it could always be worse, so be grateful for what you’ve got” type thing, I haven’t quite figured out what lesson the world is trying to teach me here yet… I’m stubbornly independent, so perhaps I need to learn to rely on others for help a little more.