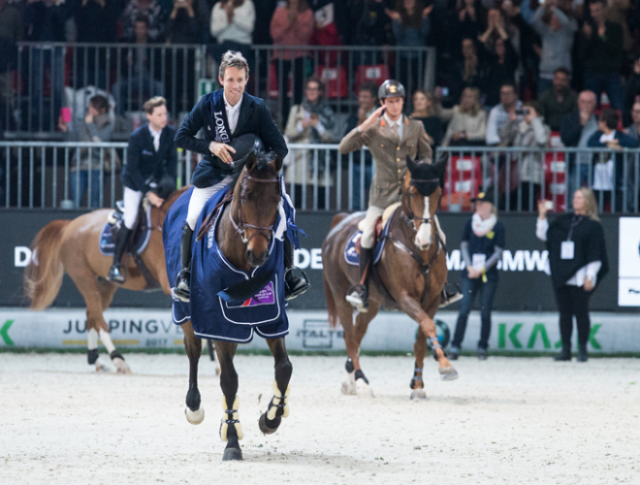 Maikel Van der Vleuten of The Netherlands and VDL Groep Verdi had a phenomenal win in Verona this past weekend with a blazing time over the ten other combinations that made the jump-off, but the way they won in the ring isn’t nearly as important as what they did to prepare OUT of the ring.

Maikel and Verdi have a strong relationship that’s been built over years by mutual communication, trust, and an emphasis on a horse that’s as psychologically sound as he is physically sound.

“He doesn’t change, he is the same every day, in rain or sunshine and no matter where he is. He is very special, and most of all he is very honest!” Maikel said. “He also likes to win and that’s very important but he also has to be happy, not every day training in the same outdoor, I try to change the work, sometimes to go outside to the woods and I use the canter track, he is more happy to train over there.”

Maikel stresses how important these changes and tweaks are to not only keeping Verdi and all his horses fit and engaged, but genuinely happy. It’s part of the winning formula.

“There are things to think about, for example four weeks ago in Rome I could feel he was a little bored. After the show in Calgary maybe it was a little bit too much for him so the last four weeks I got busy with making him happy and good again, and it worked out very well. He was playing with the jumps again and feeling good, and then the result comes as well!”

Maikel admits that heart and happiness alone can’t make a winner – you must have the talent, as well – but without a happy horse, they’re as useless to you as a puff of smoke.

“If you are a good rider and you have a horse that is not able or doesn’t want to win, then it’s just not possible. Every week I try to feel how he is, I don’t need to teach him jumping anymore, he knows his job and what’s most important for me is that he has to be happy.”

These philosophies should have more front and center dialogue in the sport — and certainly many riders are working on how to put the horse first as often as possible — but it’s less common to hear it put in such stark terms that a horse have happiness. Not rest, or time off, or health, or fitness – but mental happiness.