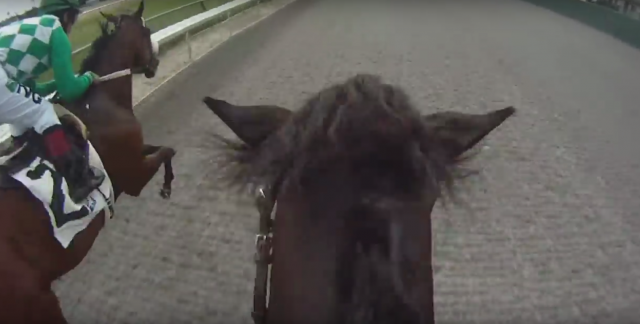 The Breeders’ Cup championship races kick off on Friday at Del Mar! We’re getting pumped up by riding with Joel Rosario.

Riding a horse, in any discipline in any fashion, is a thrill — but riding a horse in a race at maximum speed? We imagine that’s quite the rush. The best we can do for you other than strap every reader onto a galloping Thoroughbred is to provide the jockey’s point of view with a helmet cam.

Today, we’re riding Quoted with Joel Rosario — this is an older video, dating all the way back to September of 2010, but we’re enjoying this perspective of Del Mar Racetrack in San Diego. Del Mar, of course, is the host track for the 2017 Breeders’ Cup, which kicks off on Friday.

Rosario is one of the top jockeys in the sport, having ridden such champions as Animal Kingdom, Frosted, Lea, Mind Your Biscuits, Lea, Tonalist, Orb, Forever Unbridled and Practical Joke. We’re looking forward to seeing more of him this weekend!