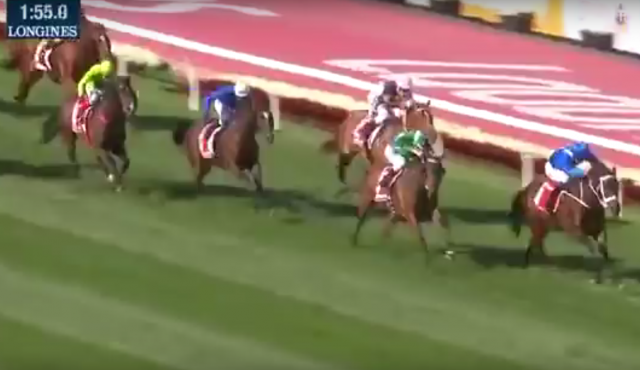 In case you missed it, the indomitable Australian mare Winx captured a historic third win in the Cox Plate over the weekend. Watch the thrilling victory here!

Winx, the toast of the Australian racing scene and truly the world as well, has demonstrated time and time again that she’s every inch a champion: she’s now won 22 consecutive stakes races, ranging in distance from six-and-a-half furlong sprints to over a mile and a quarter. She’s set the pace, stalked the pace, come from behind over what appeared to be insurmountable distances, cruised home alone and battled to the finish.

Despite earlier criticisms that the 2017 Cox Plate field was light, Winx had to fight for this historic win. She settles mid-pack as Gailo Chop jumps to the lead over Folkswood. The crowd roars to life as Winx starts her run in the turn for home, sweeping steadily by the leaders — but with Humidor in hot pursuit. These two drive to the finish in a thrilling duel, with Winx holding off her rival at the wire.

While Winx has nothing left to prove to Australia, she is currently slated to compete for a 2018 season with rumors of a European campaign. She may be taking a rest after this win, but other races are still on the table — time will tell.