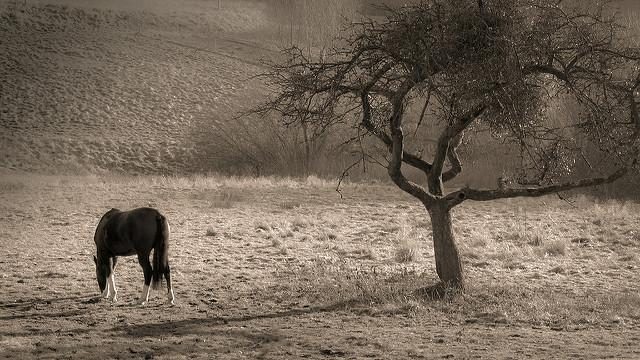 Not all of the submissions for our first annual Halloween short story contest were fiction: here are two true reader-submitted tales… 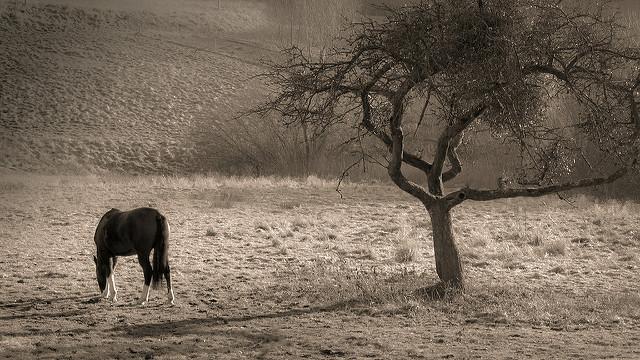 Our first story was submitted by Stacy Wegener:

I don’t blame anyone: they say the gate blew open in the storm and the driver was not aware that over the hill 2300 pounds of galloping horseflesh would be in the road. The car was traveling fast, the headlights reflecting off a white stocking, glinting off a horseshoe for a split second, making targets of the two silhouettes.

My grandfather called me the next morning telling me that my two beautiful buddies were not there anymore. Coming home was very odd. I did not want to see the newly turned soil behind the barn. I remember moving almost in slow motion walking across the street: pausing at the gate where a few days ago my buddies had escaped seeking an adventure, climbing up a small hill, feeling the wet clay slip under my feet. I felt like it was all I could do to make it to the top. I looked out into the field where my friends had lived back to the creek where we had swam and splashed and napped on the bank when we were tired, where my childhood dreams had grown.

The tears burnt their way down my cheeks the sobs that I had held in shook my body.  My legs felt weak and I realized I would never stroke that big wide blaze again, feel their soft lips tickle my hand for cherry candy canes or whisper crazy little thoughts into their listening ears.

Then I heard it. A small nicker and then hoof beats in the distance. Very soft but getting louder until it was like thunder. They were tossing their heads and their nostrils were wide breathing in the cool air. The morning sun danced on their copper coats. My pulse quickened to match the drumming of their hooves. My buddies had come to say goodbye and to let me know that they were okay. They were no longer part of this world. The hoof beats drifted away and I was alone again.

I still have a braided piece of forelock and a horseshoe to remind me of my friends but they will forever live within my heart and we will meet again someday.

Our second true tale was submitted under the pen name Exceedalot:

When I ventured back into horse ownership as an adult, my first horse was an older, OTTB ex-broodmare free lease named “DC.”  She was a very sweet old lady,  bright chestnut with a large, symmetrical blaze who patiently watched over my two children as they learned to ride. DC became a much-loved member of our family. Unfortunately, after several years as her health declined, it was time for her to go back to her owners. What a sad, tearful day that was when she left for retirement pastures.

DC’s replacement was another OTTB, ex-broodmare named Mollie. This mare was a dark bay with a thin, white stripe down her nose. One day, about a year after DC had left, I was getting ready to ride Mollie in the ring when I realized I had forgotten something in the barn. Leaving Mollie in the ring standing at the gate watching me, I was walking back to the barn when I had a sudden feeling that I need to look back to the ring. I stopped and turned to look back. That’s when I saw the horse watching me was not the dark bay Mollie, but a bright chestnut with a large white blaze. I felt sadness and smiled at the chestnut horse, then continued walking to the barn. To this day I believe it was DC coming to say goodbye as she crossed the Rainbow Bridge.