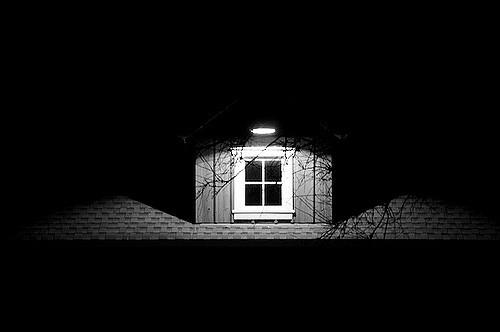 By Julie DeYoung, one of our Halloween short story contest winners!

In honor of Halloween, Horse Nation held a spooky short story contest through the month of October, calling for readers’ best horsey tales of horror (and humor!) We’re sharing our favorites over the next two days, and we’ll be reading these tales on Horses in the Morning on Halloween day.

It was a fall evening and I had left the barn and decided to stop by the local watering hole on my way home. They were used to people stopping by in barn clothes for a post-ride beer, or to a group of horse girls out for a couple of glasses of wine to discuss how their hack went that day.

But tonight I was by myself, so I bellied up to the bar, grabbing an empty bar stool next to a stranger. After signaling the bartender for my usual Rolling Rock beer (it’s got a pony on the label, you know), I uploaded my latest between-the-ears photo to Facebook and was checking to see what my various “friends” around the social media world were up to when the guy next to me starts to make conversation. Now, he didn’t look like the typical “horsey set” that frequented the bar; in fact he looked a bit seedy, with long unkempt hair pulled back into a ponytail and a Grateful Dead T-shirt and grungy jeans.

He could tell by my attire that I was a horse girl, so he made the obvious comment, “So, you like, ride horses?” Glancing up from my smartphone, I said, “Yes, I ride at the stable down the road.”

By his conversational style and dress, I concluded that he was an ex-hippie or some sort of surfer dude. “You know,” he said, “like, I used to work there.”

“That’s because I used to work the night shift, keep an eye on the place after everybody was gone to be sure nobody came in and messed with the horses,” he said. “You ever been there after everybody else has left, and they turn off all the lights in the barn?”

“Well, take it from me, I wouldn’t if I were you. I lasted a little over a year but I just couldn’t take it anymore.”

“Yes, I hear working nights can be really difficult,” I said sympathetically.

“It wasn’t that. Like, I’m kind of a night owl anyhow so I thought it would be cool to get paid to just stay up all night, hang out with the horses, you know? And it was cool, for a while.

“I’d sit in the riders’ lounge, with all the lights off so as not to encourage anybody to come in. And I’d sit and look out into the indoor arena through that looking glass. There’s a little bit of light from the security lights and exit signs. I’d hang out, maybe smoke a little pot, you know, take a stroll around the barn to check be sure everything was OK every once in a while, then go back to the lounge. Maybe listen to some Hendrix, you know, chill.

“So one night I’m hanging out. It was a full moon so some light came through the row of windows up in the dormer. All of a sudden I see the gate swing open to the indoor. Now, nobody is supposed to be there. And I had just done a walk-around and hadn’t seen anybody or any activity at all. But I could see something moving in the indoor arena, passing in and out of the shadows, circling around on the rail.

“Now, I’m no horse guy, man, I just think they’re pretty, ya know? I don’t know anything about riding them. But whatever it is seems to be going in some pattern, and then it’s crisscrossing the arena, seems to actually be jumping stuff.

“Of course, I’m bamboozled. I can’t figure out what could be going on. Did a horse get loose and somehow is in the indoor arena running around? Did a rider come back and decide to take a ride in the dark? I mean, like, man, why would someone do that?

“So I keep watching, trying to figure out what the heck is going on. I finally decide to work up the nerve to go over and flip on the light to see what’s out there.

“I ease out of the lounge and work my way down the hall where the switch is for the lights to the indoor. And now I not only see the shadows moving around, I can hear the hoof steps. Something is definitely in the indoor arena.

“Now I’m annoyed. Who’s out here messing around with stuff in the dark? They’re not supposed to be, and not in the dark, it’s not safe. Yeah, yeah, I know horses have better eyesight in the dark than people do but it’s still not right.

“So I decided to give them a bit of a scare, flip on the lights all at once, teach them a lesson, you know?

“So I get to the light switch and I’m waiting, listening to those steps circling around the arena and I wait till it’s coming closer to me. I want to be close enough to see the face of the rider when I turn on the lights, see their reaction you know?

By this time, my bar buddy has worked himself into a frenzy. He’s panting and his eyes are wild.

“Whoa, settle down,” I say. “So a horse got out, no big deal. I’m sure you caught him and put him back in his stall, right?”

“You don’t understand! It was a horse, all right, but not only didn’t it have a rider, it didn’t have a head! It was a headless horse, man!

“Needless to say, I got the hell out. I turned and ran and I never went back. I called the next day and told the stable manager what happened, but they didn’t believe me. They accused me of being high and hallucinating. I’m telling you that was no hallucination.

He got up to leave.

“People around here call me Icky, but my mother calls me Ichabod. Now you be careful going home, OK?”