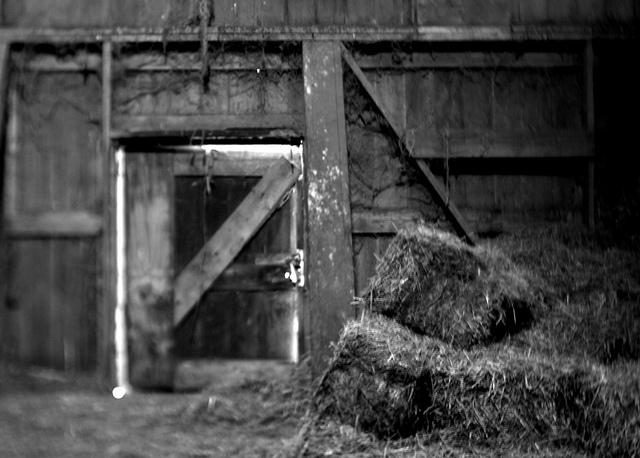 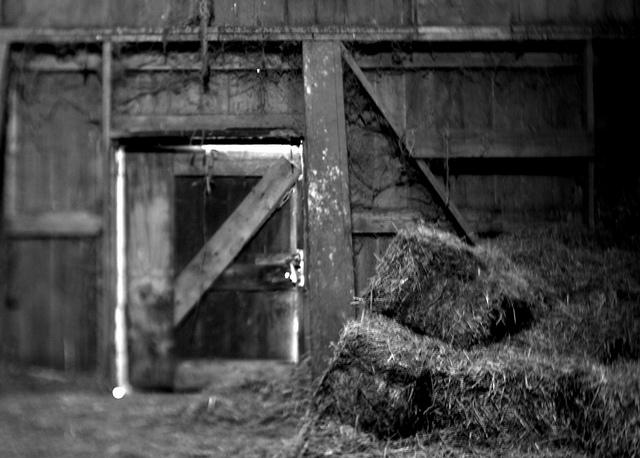 In honor of Halloween, Horse Nation held a spooky short story contest through the month of October, calling for readers’ best horsey tales of horror (and humor!) We’re sharing our favorites over the next two days, and we’ll be reading these tales on Horses in the Morning on Halloween day.

The angry night sky rumbled with thunder and flashed with lightning.

“Noooooooooo,” I grumbled back, equally angry. It had been a long day. The thought of leaving the comfort of my bed made me miserable.

But there was no choice. All 16 horses were out in the pastures with trees, and metal roofed run-in sheds and some had shoes on. Perfect lightning rods.

Recently, a few of the plexiglass skylights had begun to leak when it rained. The overhead lights had been mounted too close to said skylights, so turning them on when it was raining could cause them to short out, spark, and a fire to break out. Needless to say, that would be BAD.

As I walked back and forth from pasture to pasture, horse to horse, I tried to tell myself that I wouldn’t need the lights on in the barn. I tried to convince myself that my crazy helper, Lori (bless her 80-year-old soul), would have left the water buckets full, waiting for a thirsty horse to come into the stall for a drink. Tonight of all nights — or very early morning, as I was pretty sure my bleary eyes saw 3:43 on the clock as I pulled on my glamorous outfit of a nightgown, yoga pants, and knee-high muck boots — she had to have left the buckets alone.

“They get yucky if you leave them full,” I could hear her voice in my head. “I leave them full so when I bring all the horses in for breakfast they have something to drink. Once they are done breakfast, I dump, clean and refill each bucket. They don’t get dirty that fast,” I must have argued a million times with her about it. But I was just the barn manager. What did I know? With another heavy sigh, I headed back out into the rain to get the geldings.

I saved the boys for last. I knew they would be the most difficult to convince to come in. Actually, out of the six boys only three were going to be an issue: the three Haflingers whom I affectionately call Haflinger Nation. They were the most stubborn, most problematic, most crazy geldings I had the pleasure of taking care of. I loved them so much in spite of their attitude. They never ceased to make me laugh with their antics. They also seemed to rejoice any time it rained. While the other boys would be crowded into the run-in shed, Haflinger Nation would be galloping, jumping and bucking enthusiastically as though a summer storm needed celebration. Convincing them to leave the cooling rain, no matter how hard it was coming down, would be a challenge.

I was NOT in the mood for a challenge. Once the other boys were secure in their stalls, I went immediately to bribery for the Haflingers. I filled a grain bucket up halfway and headed to the pasture. I opened the gate, hollered to the crazy ones and shook the bucket. The rain had picked up and the thunder was loud so it took them a little longer to hear my shouts and the sweet sound of promised grain. But once one gelding heard it, he ran towards the gate. Once one started, the others followed. At least Haflinger Nation was predictable.

I headed into the barn with hungry Haflingers on my heels. They knew their stalls and obediently went into them knowing they would be rewarded for their good behavior. As I got more grain for the other horses, I sighed in relief. That went better than expected.

Thunder rumbled across the wicked night again and I grumbled again right along with it. I had to fill the water buckets. In the dark. In a thunderstorm.

The rain was making the temperature drop so I concluded that they would only need one full bucket each. Besides, I’d be out there again feeding breakfast in a few hours. So I got the hose and got to work. As I went slowly from stall to stall filling buckets, my mind began to focus on other things. I actually loved a good thunderstorm and this one was a doozy. The thunder was almost deafening, the lightning sharp and bright, and the rain was dumping so hard I could barely hear myself think. Then again, anyone with a tin roofed barn knows that the rain echoes. It is such a beautiful –

I shook my head. I couldn’t have heard a –

There is was again. A thump. On the roof.

Oh, I must be more tired than I realized. I’m hallucinating sounds on the roof.

I shook my head again and kept filling water buckets. There was nothing on the roof and I knew it. Especially not in this storm. As I continued to slowly fill the buckets, my mood improved. Just ten more. Just nine more… It was getting better.

Okay, that was definitely a thump on the roof.

The majority of the farm’s hay was stored in a large shed behind the main barn which everyone called the hay barn. The myth of the man in the hay barn had been created to explain why tack went missing, why things would be found out of place or any other unexplained thing that occurred. He was also to blame for everyone’s irrational fear of wandering around the farm at night without lights on. “You never know who’s lurking around,” I’d be told. “Oh my God,” I would declare. “There’s nobody around. Shut off the lights when you leave!” But it would never happen. There’s a man in the hay barn.

I laughed, knowing everyone would insist the man in the hay barn was on the roof. I shook my head and laughed again, but this time it was a nervous laugh.

I heard the thump again. It was moving.

Okay, Rita, you’ve seen too many horror films. There’s nothing out there.

But the thumps were indeed on the move. I had been filling buckets from the back of the barn to the front as usual and the thumps were traveling in the opposite direction. They weren’t moving quickly, but they were definitely moving. I heard a couple more thumps and my heartbeat increased.

Rita, don’t be silly. There is no man in the hay barn.

But there certainly was something thumping on the roof. And it continued its slow movement towards the back of the barn.

I listened closely as I filled the final bucket, but heard nothing.

See, you were just being silly. It’s the middle of the night, it’s storming hard, and your imagination is on overdrive.

I felt stupid. Of course, there isn’t anything on the barn roof.

I proceeded to walk around to every stall to say goodnight to each horse individually as was the routine. As I began to shout my goodnight to the barn cats a particularly loud crack of thunder and a bright flash of lightning made me and a few of the horses jump. I laughed at myself.

The man in the hay barn.

I shook my head again at my own silliness. Time to get out of these wet clothes and back into –

It was loud and quick this time.

“Okay, that does it!” I told the horses. “This is ridiculous. There’s nothing out there!” I stomped to the back of the barn, unhooked the back door, and slid it sideways just enough for me to go outside. I walked as far back as I could to look up at the roof. Nothing.

Well, of course, there’s nothing.

I shook my head again. I don’t know how I could let my imagination get the better of me.

Lightning lit up the sky again. Thunder boomed all around. I stood there a moment to take it all in. Even though a thunderstorm meant waking in the middle of the night to do more work, I loved them. There was nothing like a summer storm in the dark of night. I sighed again, but this time contently. Life was imperfect, but wonderful. I was blessed to do a job I loved so much. And little peaceful moments like this –

I jumped out of my skin.

Something IS out there.

The barn. I had to get back inside the barn. The door was only a few steps away, but my effort was futile. The attacker landed on me.

“AHHHHHHHHHHHHHHH”, I screamed in vain. There was no one even remotely within earshot. I thrashed violently trying to get my attacker off of me. I felt part of it on me, cool and wet from the rain. I used all the strength I could muster. Finally, I flung my attacker off me and braced in case I was attacked again.

I stared down in disbelief as one of the barn cats glared at me. “MICKEY!!!!!!!!!!!” I screamed at him. “You scared me half to death! You were on the roof — why would you be on the roof in a thunderstorm? You dumb cat!” Mickey ran quickly away from me into the dry sanctuary of the barn.

My heart was beating out of my chest. I couldn’t believe I didn’t have a heart attack.

I almost died because a cat scared me.

I need a drink.

I quickly said goodnight again to the horses as a collective as I walked to the front door to head back to the house and to my much-needed drink.

Now I understood why my boyfriend doesn’t like cats. “Goodnight,” I repeated as I got to the door.

There it was again. On the roof and on the move. But this time the sound was coming towards me.

I flung open the man door and ran as fast as possible to the house. If anyone asks, I ran because it was raining.

Whether you have an old tale that’s been passed down in your barn family or you conjure up the best spooky story in your mind and put it down on paper, we’re calling for your best horsey Halloween tales for our second annual short story contest. We’ll publish the best around Halloween, and we’ll be reading our favorites on the Halloween episode of Horses in the Morning, the horse world’s first and favorite daily podcast!