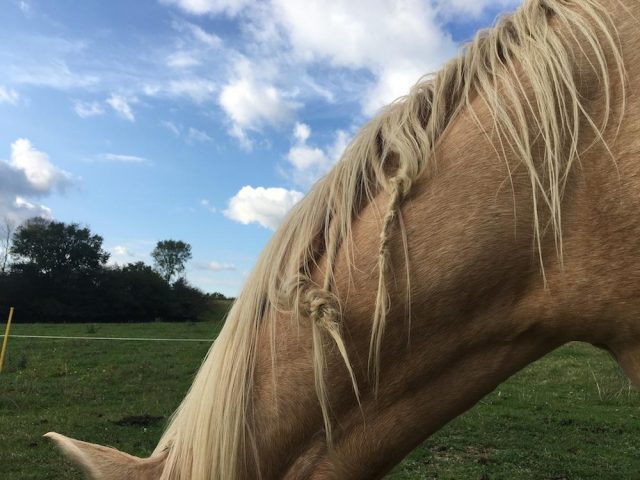 The truth is not always exactly what it appears. 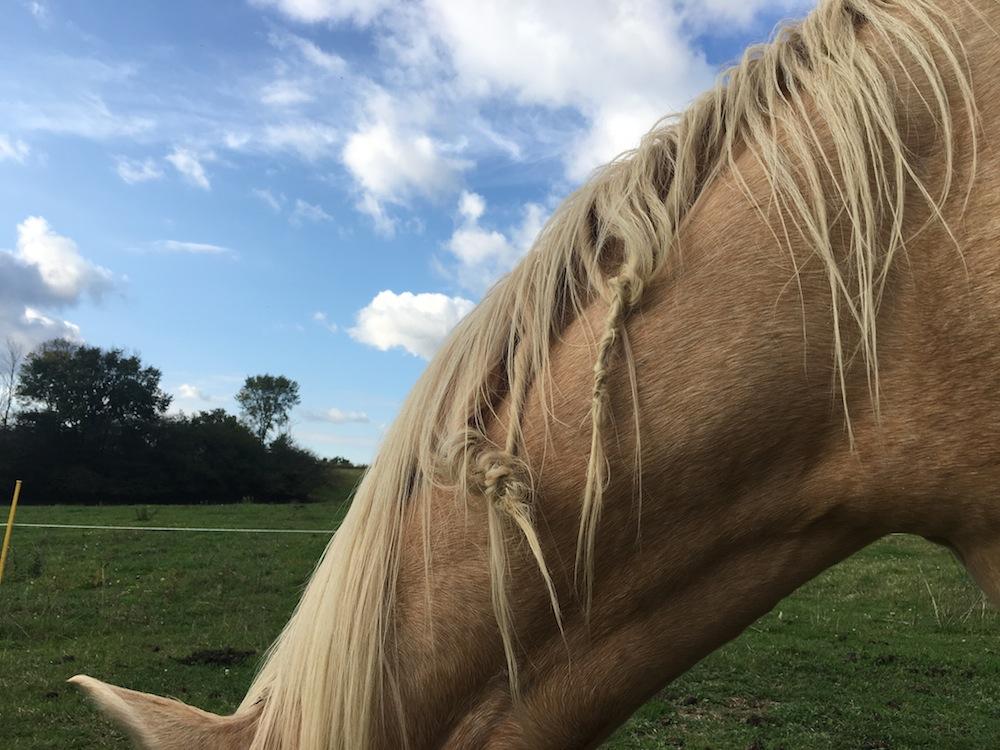 Jessie looped the lead rope back over her shoulder as she double-checked the chain on the gate by feel, her eyes following the pale shape of the thin horse they had named Gold Dust as he ambled away into the night to find his pasture-mates. She volunteered three nights a week at Rainbow Horse Rescue, savoring the moments spent helping horses find their feet again as she saved up money for a horse of her own thanks to a decent day job she had luckily landed right out of college.

Satisfied that the gate was secure, she was about to turn back towards the brightly-lit barn when a voice out of the darkness made her jump.

“He’s looking better already.” Sarah, the proprietor of Rainbow, emerged out of the rapidly-falling night to nod towards Gold Dust’s pasture.

Jessie fell into stride next to Sarah and the two women headed into the bright barn together, Jessie to hang up the halter and lead and Sarah to check on the few residents currently stalled. Whenever the conditions were right, Sarah liked to have the rescued horses living out full-time, believing that the horse was designed to move freely and socialize with his friends in order to recover from whatever path had brought them to Rainbow. A few of the more delicate cases were currently stalled — Jasper, a pony recovering from the removal of a cancerous tumor in one eye, and Burgundy, a lanky Thoroughbred mare bouncing back from an abscess.

“He is looking better,” Jessie agreed, referring to Gold Dust. “It just breaks my heart, though… how could someone do that to a horse?” The aged gelding had arrived six weeks prior, nearly skin and bones with overgrown hooves and a matted mane. After his quarantine and introduction into the gelding herd, he had started picking up weight considerably. “It took me forever to comb out those dreadlocks. I can’t believe no one loved this horse. He’s a sweetie.”

Sarah, satisfied that both Jasper and Burgundy were situated for the night, turned to Jessie with a smile. “It’s easy to hate, isn’t it? You never heard where Gold Dust came from.”

Jessie sighed inwardly. Sarah, for all the horrible things she had seen in running Rainbow for the past two decades, was somehow still as patient as a saint.

“He was owned by an old couple, and it was the husband who did most of the work in the barn. Gold Dust was their last remaining horse, and the husband still came out every day and groomed him until he gleamed even though he was too stiff and old to ride. And then the husband had a stroke, and in the weeks of hospital stays and eventually hospice at home, poor Gold Dust was forgotten. After the funeral, the wife called us for help, and she cried and cried when we came to take the horse away. He was the last living link to her husband.”

Jessie felt a flush rise in her cheeks, a little embarrassed now that she had grumbled about someone intentionally starving the horse. “Well… she should have called sooner,” she offered, not meeting Sarah’s eyes.

Sarah smiled and eased herself down onto a hay bale at the edge of the feed stall. “Do you know the story about the first horse I rescued here?”

Jessie shook her head, silently seating herself on the floor at the base of Burgundy’s stall door. She felt the mare’s warm breath on the top of her head and slowly reached a hand up to stroke the horse’s muzzle.

“There was no rescue in this county for large animals,” Sarah began. “So I was shocked one night, after doing the night feeding for the two riding horses I kept here in this barn, when the cops drove up and wanted to talk to me. They had a horse that needed help and they were looking for someone to take it in and take care of it. They thought it was a long shot since they knew most folks around here didn’t have much to spare to take in another horse to feed, but I thought I could make it work. And that’s how Lucky made his way here.”

“He was skinny as a rail, and his feet were long, and his mane was all tangles, just like Gold Dust. And I was just like you. I spent hours coming out those twists and knots, carefully grooming his shabby coat, watching as with the good feed carefully applied and the love and attention, he bloomed again into a handsome fellow. I ended up keeping him, but that got the ball rolling on turning this place into a rescue and helping horses out of bad situations and into good homes.”

Jessie smiled, while wondering what this story had to do with Gold Dust.

“The funny thing was with Lucky, every morning when I went out to feed, he’d have those tangles all twisted up in his mane again.” Sarah looked sideways at Jessie. “Didn’t you comb out Gold Dust’s mane the first day?”

“Well, he was all tangles again the next day. Lots of horses here get those tangles. You know. You spend enough time grooming them and making them feel loved again.”

Sarah had a point, Jessie realized. There WERE a lot of tangled manes to contend with. Sarah chuckled and looked down at the floor, twisting a stray piece of hay between her fingers.

“They’re probably just from the wind. But legend calls those witch’s knots. If you see them in the morning, it means a witch came and visited that horse in the night.”

Normally, Jessie would have laughed. But there was something about Sarah’s tone, her lack of eye contact, that made the hairs on the back of Jessie’s neck stand up.

“I was like you then,” Sarah continued. “I was so angry at whoever had done this to poor Lucky. He was just a horse, he had no say in the matter, and someone had treated him like garbage and basically left him to die. The cops never really told me much information about where Lucky came from, but after enough years of me pestering them for more information — he was a lovely ride when I finally got around to saddling him up — they told me the whole story.

“Lucky had been owned by an older woman who lived all alone, down on that Granite Hollow road — you know the one?” Jessie nodded. “Local lore said that the lady that lived there was a little odd, liked her privacy. The kids used to try to creep each other out with stories about the haunted old hag that lived back there. Usually though, people driving by never thought much about the little house tucked into the woods. But they did notice the pretty dark bay horse in the pasture that would stand in the shade on a summer’s day and watch the cars go by. And they noticed when he got skinny, and someone finally called the police when he was really far gone and the ground was all covered in snow and there was no more grass for him to eat.

“The police came by the house and found it empty. Almost like it was abandoned. But nothing was missing — there were dirty dishes in the sink, laundry in the basket. But no sign of the woman at all. It was like she had just disappeared. They searched the property and found nothing — just a quiet little homestead all covered up in snow.

“When they brought a dog around, he found her. It looked like the woman had maybe gone out to feed one day and slipped and fell and broke her hip, and didn’t have a cell phone to call for help. The saddest part to me was that they figured out — I dunno how — she had tried to drag herself along for a ways… but not towards the house. She was trying to get to the barn. Like she knew the horse needed her. And the cold must have finally done her in.”

Jessie sat in silence, a heaviness in her chest.

“Well.” Sarah said after a moment. “I felt pretty badly about my unkind thoughts. And I made a vow the day I finally got that whole story to withhold my judgment. Every horse that’s come through this barn has a story, and sometimes those stories will break your heart… but not always in the way you expect.”

Sarah smiled to herself before rising up off the hay bale, offering Jessie a hand to pull her to her feet. “I don’t say it enough, but thank you for your help around here, Jessie. This place wouldn’t run without volunteers.”

The pair moved down the aisle together, Sarah flicking off the lights as they headed to the big barn door. As her eyes adjusted to the darkness, Jessie could make out the shapes of the gelding herd in the pasture adjacent to the barn, the pale presence of Gold Dust among them. For a moment, Jessie stared, trying to identify a darker, smaller shape among the horses before shaking her head. It was nothing.

“Look for those witch’s knots tomorrow,” Sarah said quietly, making Jessie jump again. “We’re not the only ones watching over these horses.”