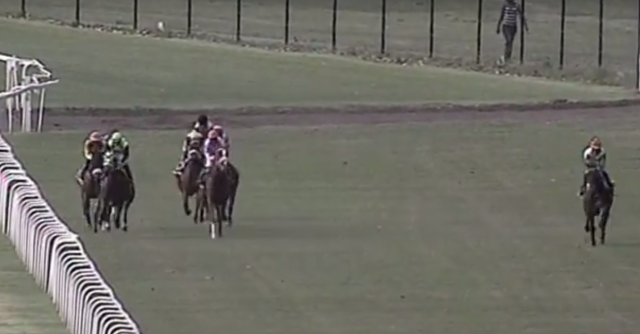 The aptly-named Run Rhino Run somehow came out on top in this super crappy moment!

We can safely assume that absolutely no one saw this one coming, from the race caller to the poor jockey Serino Moodley hanging on for the ride in South Africa: Run Rhino Run managed to flip his tongue over the bit and decided to run this race entirely on his own terms. Even more surprisingly, considering the tour of the outer rail he chose to take, he won.

The six-year-old Run Rhino Run does have a reputation for being a bit of a tough ride, but this was another race entirely. He’s clearly got some stamina, so if his connections decide he should retire on this particularly impressive, if head-scratchingly bizarre, victory, we’re sure there would be plenty of scope for this guy to excel in a second career.