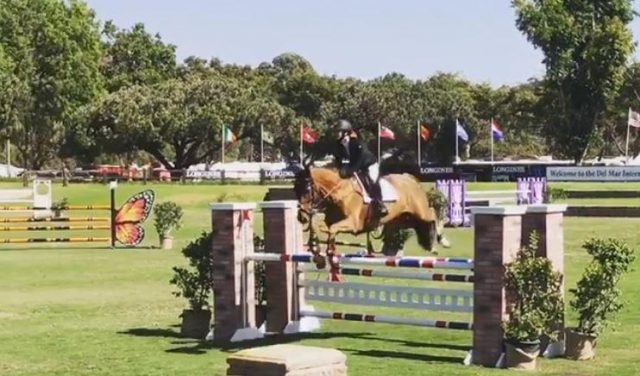 Kaley Cuoco: an equestrian who acts, not an actress who rides.

While celebrities dabbling in the equestrian world is no new phenomenon, Kaley Cuoco takes her dual lives to a whole other level. The female lead of CBS’s hit sitcom “The Big Bang Theory” won over the respect of many skeptical equestrians when she said earlier this summer that she’d rather be considered an equestrian who acts than an actress who rides.

And the girl’s got the seat and hands to prove it.

My favorite ginger, Vulcan, today in our first am. 1.30 together ! Ended up 4th- we are so proud of this horse. Patience is a virtue – we have taken our time and he is totally blossoming. The future is bright with this super ⭐️! ???????????? #delmarinternationalhorseshow

Earlier this week Kaley and one of her rockstar mounts Volcan D’Ivraie had a spectacular round at the Del Mar International Horse Show to finish the Low Junior / AO Jumper 1.30m class in fourth place. The eight-year-old french-bred Anglo Arabian has really come into his own since importing in 2016, and could be the future of Kaley’s equestrian career.

Kaley also announced on Instagram that her main squeeze Pokerface will be back in the tack and in the show ring soon after taking a few months off for an injury. We’ll be eager to see this one out on the hunt in the very near future!

#pokerface taking in today's festivities ???????? thjs goofball has been enjoying a well deserved few months of r&r.. He is now back to work and we can't wait to have him back with our squad starting next year!

We’ll be bringing you more from Del Mar soon, so keep it locked on Jumper Nation!