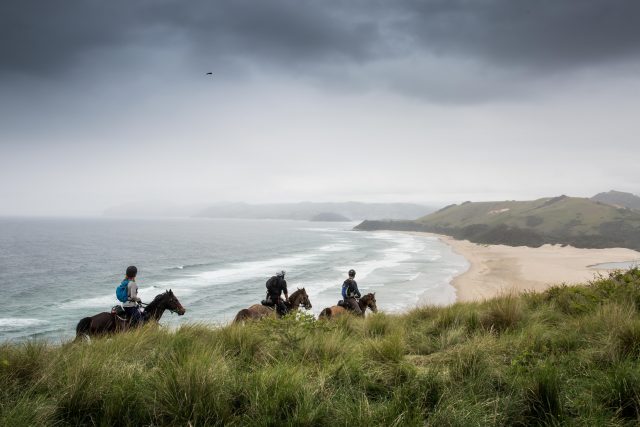 Race the Wild Coast pits riders against one of the most rugged, remote corners of the world on South Africa’s Wild Coast. We caught up with race creator Barry Armitage to learn more. 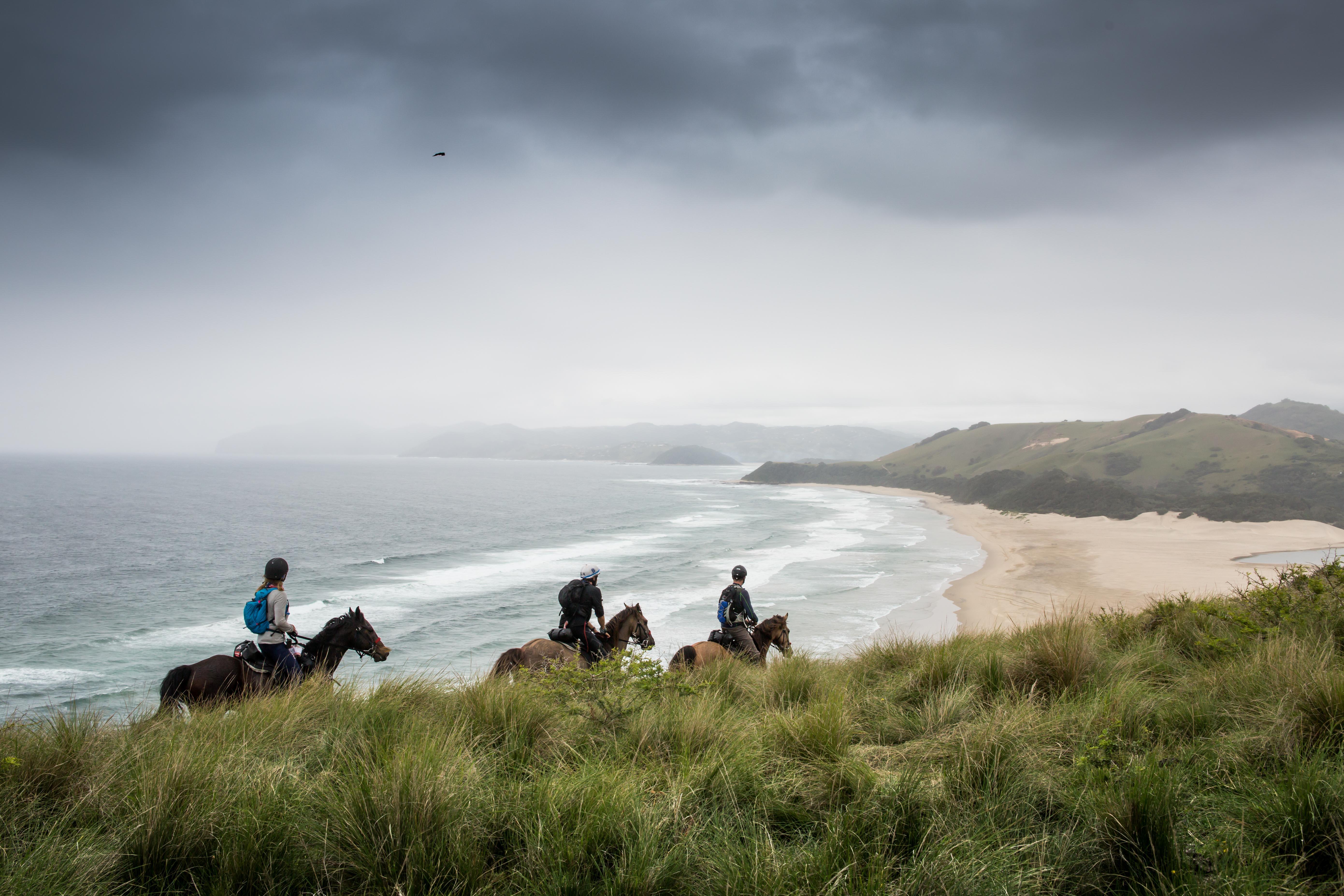 All images are courtesy of Rockethorse Racing.

For some of us — such as myself — “adventure” might mean a spirited gallop on an autumn lane or successfully navigating a technical section of new trail. For others, the pursuit of adventure becomes a lifelong thirst, a personal test against nature and the elements.

And for yet others, that thrill of adventure is made better when it’s shared. That’s what drove Barry Armitage to create Rockethorse Racing, which is poised to produce the second running of Race the Wild Coast over 350 kilometers of South Africa’s remote and rugged western coastline.

The Wild Coast is aptly named: the terrain varies quickly from rolling hills to open expanses of beach to jagged cliffs scarred by gorges and flowing rivers. For five days, this is location for one of the world’s most intense endurance races, pitting riders and their well-conditioned mounts against these natural obstacles. Nothing is off-limits, from navigating on foot through jungle to swimming across rivers, and competitors from the first running in 2016 stated it was one of the most intense experiences of their lives.

What kind of equestrian-turned-adrenaline junkie does it take to create such a race?

“I was trained as a clothing designer, a couple of lifetimes ago,” Barry Armitage laughs. “Then I worked for about 15 years as a professional sailor, working on yachts based in Majorca. I essentially traveled the world that way. The opportunity arose to develop a 3,000 hectare wildlife reserve in South Africa. I had always loved the idea of having a horse; when I was able to I would jump on horses and ride them… badly.

“At the age of 37 I bought my first horse, and then more horses. I rode a mare named Pepsi, an endurance horse, who gave me quite an education in how you can cover ground and travel the landscape by horseback.”

It bears mentioning that a man who learned to ride at age 37 just tied for the win this summer in the Mongol Derby, proving that when it comes to a life’s passion, there is no such thing as starting too late. It was Barry’s love for that concept of long-distance horse travel that led to him discovering the Mongol Derby in the first place. “In 2008, the wildlife preserve project wrapped up and I moved to Cape Town, and I decided to make television shows about epic horseback journeys throughout history — a thousand kilometers or more.”

It took two years to prepare for shooting but an obsession was born: Barry first entered the Mongol Derby in 2011 for the second TV series he produced, and with this passion to drive him, he began networking, dreaming of a race down South Africa’s Wild Coast. 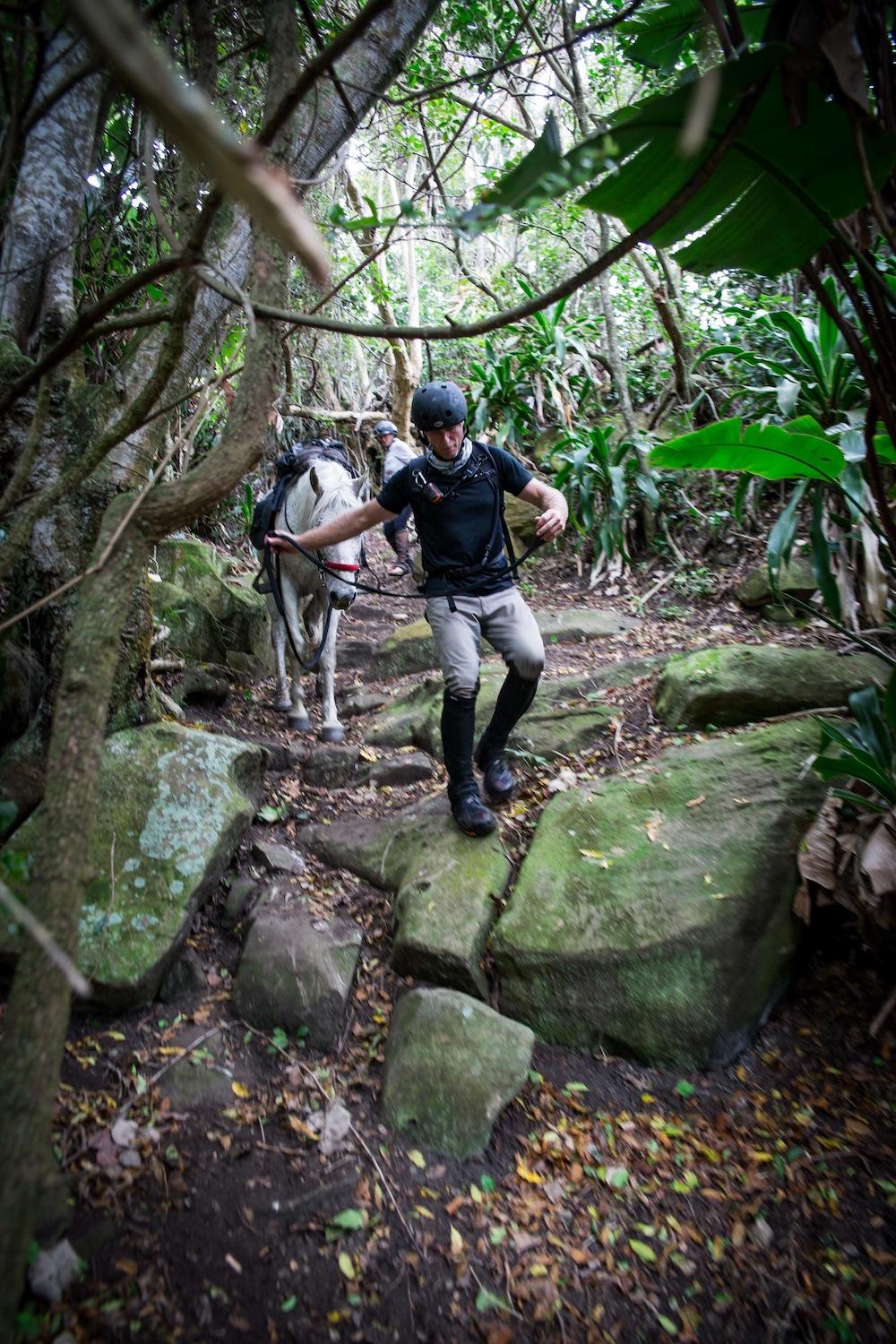 “The Wild Cost is an unfenced wilderness. It’s remote and undeveloped due to politics and topography; because of apartheid it’s just untouched to a large degree. You’ll be riding down beaches with no other footprints,” Barry describes.

The race format follows some of the basics from the well-known Mongol Derby: riders are racing over five days and 350 kilometers broken down into roughly 40 kilometer sections between vet checks — equine health is paramount. Horses are changed out twice, so each rider is paired with three mounts total.

Unlike the Mongol Derby, there is no sleeping out in the wilderness. “Everyone overnights at a vet check. Riders are held if there’s not enough daylight to get to the next check, and all riders are released twelve hours after they come in. So if you come in at 5:30 PM and stop there, you start again at 5:30 AM. Say a rider who goes on after you stop at 5:30 and gets into the next check at 7:30 won’t leave until 7:30 AM the next morning; you might very well catch up to them. Tactics definitely come into play.” 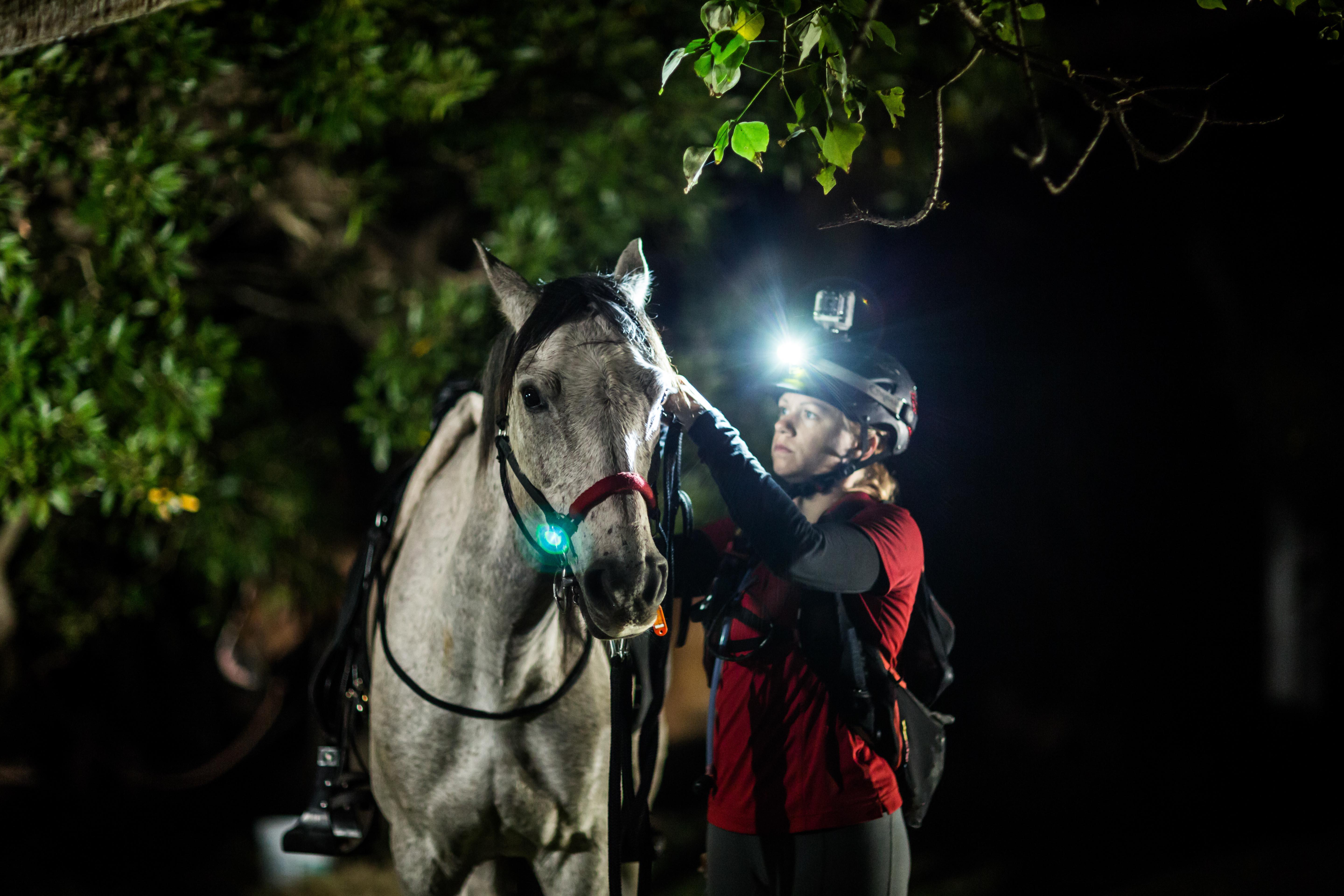 For the first running in 2016, horses came from two different local studs, but going forward, all horses are coming from Moolmanshoek Private Game Reserve, which hosts long-distance rides with its own herd of “trail-fit, endurance trained” Arabians and local-bred Boerperds. “The Boerperds are well suited to the middle section of the race, which has a lot of hills and technical terrain. They’re good doers in that environment. We have the riders mounted on Arabians for the first and last sections.”

Fitting and conditioning horses for the race is no small feat: preparation starts early in the year, so Barry will ideally be looking to have the 2018 field selected and set by the end of 2017 so that the horses selected for the race will be fit and ready. “We actually just purchased a horse walker for Moolmanshoek to get the horses fit.”

The horses are fit not just for traversing cliffs and galloping on beaches, but for swims as well — a unique highlight of Race the Wild Coast. “There are 32 rivers along the coastline to be crossed, with five or six of those real deep-water crossings: the horse is completely off the ground, the rider is out of the saddle. The riders don’t actually swim here; the horse is basically towing them along. We train everyone on all three of their mounts before the race begins and normally by the time they’re crossing a river in the race they’re actually enjoying it and looking forward to it.”

Barry recalls one of his favorite moments from the 2016 race: “I was watching the leading group from the helicopter at a river crossing, and when they got there they didn’t even hesitate, they were just bang right into the water.” 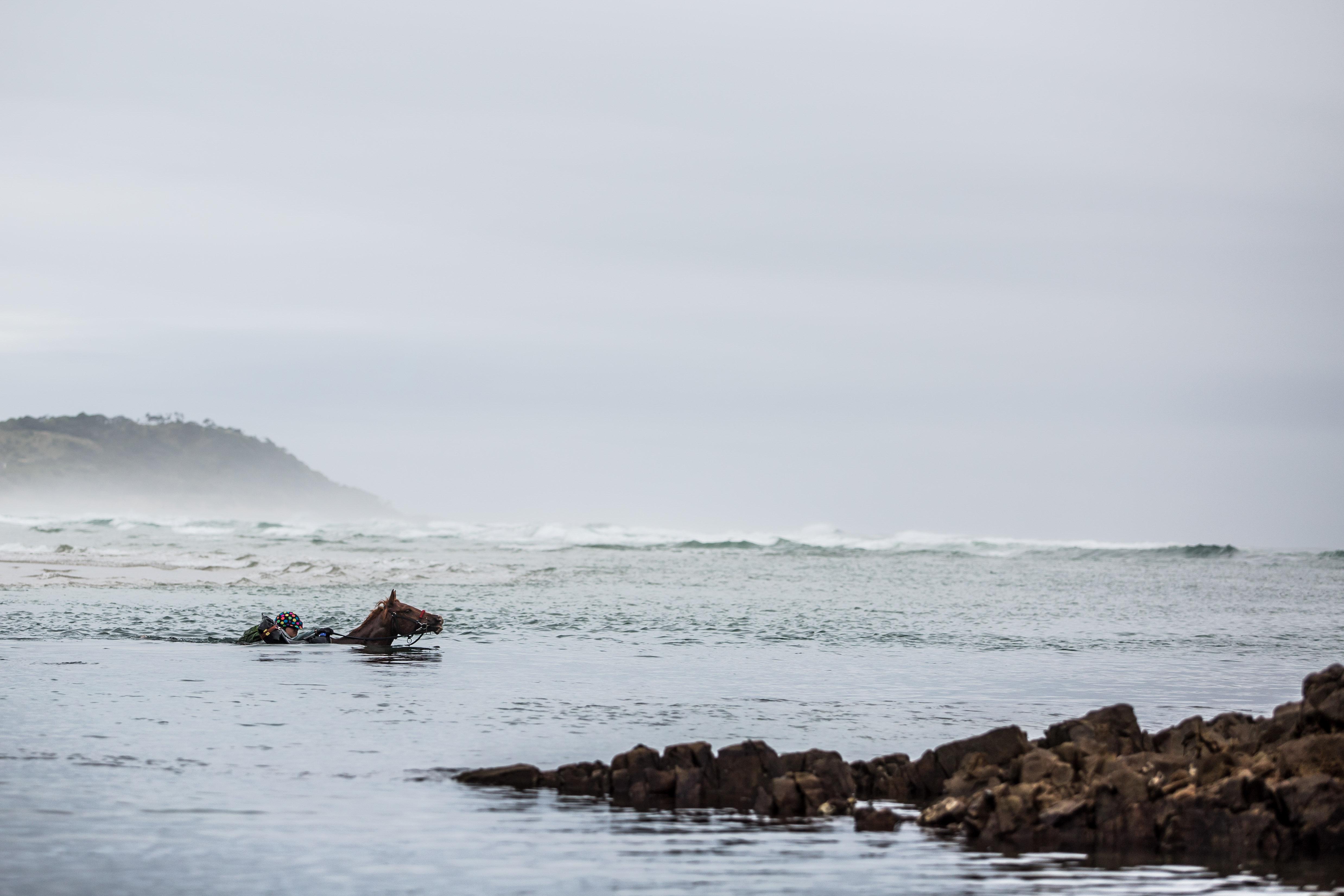 The river crossings do require some careful planning, however. “Conditions might change based on weather, rainfall and the tides. We select the race dates based on the timing of neap tide, where there is the smallest difference between low and high tide — the tide does affect these rivers which are flowing out of estuaries. On a daily basis, we time the river crossings at the major swims to be as low as possible. There’s little danger of being swept out to sea when you cross at slack water or when the tide is just coming in.

“There’s a far greater likelihood of riders being injured from a horse tripping and falling than anything having to do with the swims. There are some sections where the ground is steep and drops down to the sea and you’ve got to be careful. We had no injuries in the 2016 race — some falls, but no injuries.” 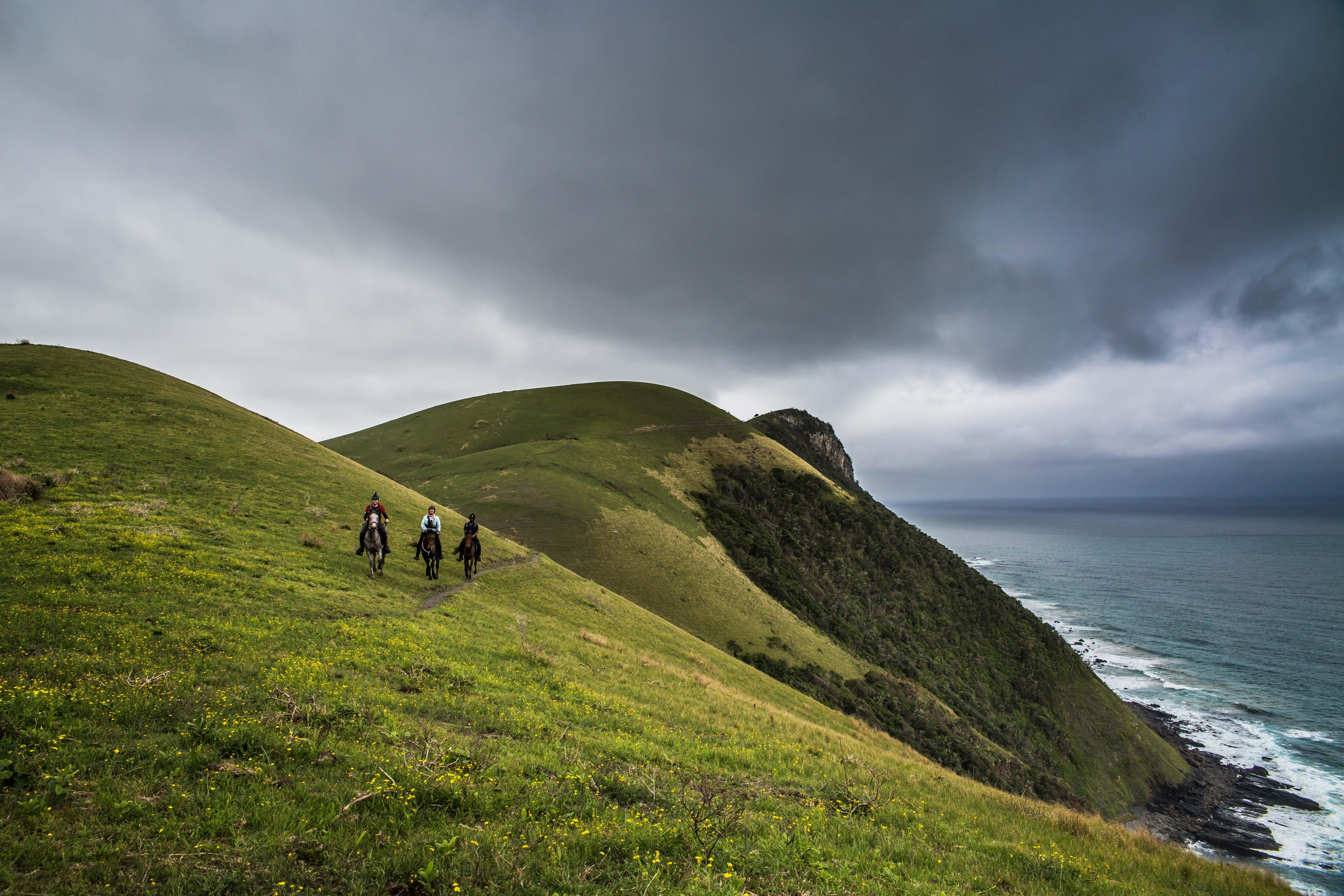 While the first running in 2016 might have appeared to run like a well-oiled machine, the coordination of so many moving parts takes a true visionary: “Our crews are traveling by 4×4 vehicle with a trailer: we have five teams leap-frogging down the coast to operate two or three vet checks, with another five teams looking over the overnight camps and horse changes. It’s a total of 11 crews out there, including me and the camera crew traveling by helicopter.”

By “leap-frogging,” Barry simplifies what is actually quite a complex process — there’s no simple, easy road down the coast for crews to follow. “The vehicles to move our crews from vet check to vet check might have to drive 200 to 300 kilometers while the riders are only going about 40. The race riders are in this bubble; they’re just following a line on their GPS and it actually gives them a false sense of security about how far out they are.”

And in the modern era of real-time technology, keeping track of the riders and providing updates for the fans and followers back home is paramount. “There is a central office where someone is following the GPS trackers and keeping our website updated during the race. Much like the Mongol Derby, we have a tracking website and we also update Twitter and Instagram,” Barry describes. In an unforeseen twist: “I can actually update Twitter easily from the helicopter — once we get off the ground we get better cell service!”

Barry is hopeful to see the full film for the 2016 running available in the US in early 2018; the film is the final stages of post-production and it’s been pitched to Ride TV which has carried Barry’s previous series on long-distance racing.

Until then, however, scenes replay themselves in Barry’s mind: “Seeing the riders canter off down the beach at the start was surreal. I couldn’t believe we had pulled this race off. But my favorite moment, I was in the helicopter with the camera crew on the last day, and I watched the race leader Sarah Cuthbertson be caught by Sam and Monde on the beach. Sara had a 32-minute lead on the penultimate day when Sam and Monde stopped at a vet check as both of their mounts had thrown a front shoe. The weather was cool and it was a beautiful racing day and Sam and Monde caught Sara on the beach and overtook her. It was a grand race to the finish but Monde’s horse had a bit more gas in the tank, all while I was able to watch this from the helicopter.” 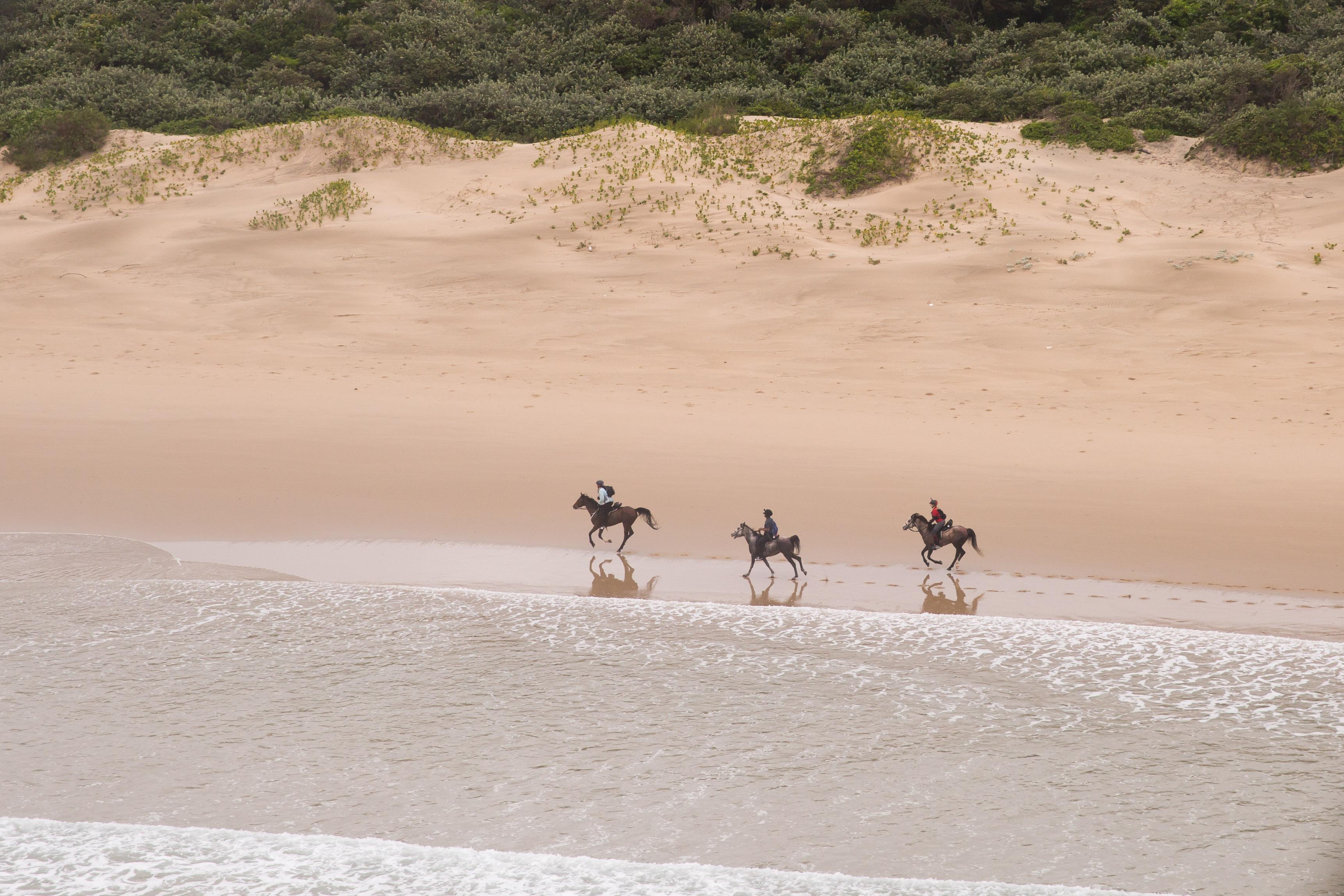 Applications are open for the 2018 race with a 5% discount on the race fee for individuals applying before the end of October. The race will be held annually going forward. Learn more and apply for Race the Wild Coast at Rockethorse Racing’s website.