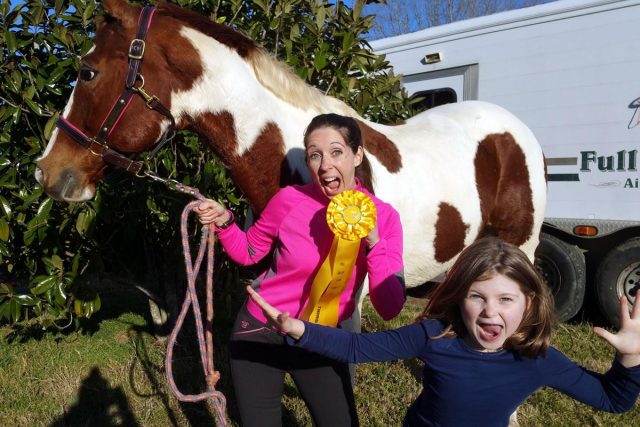 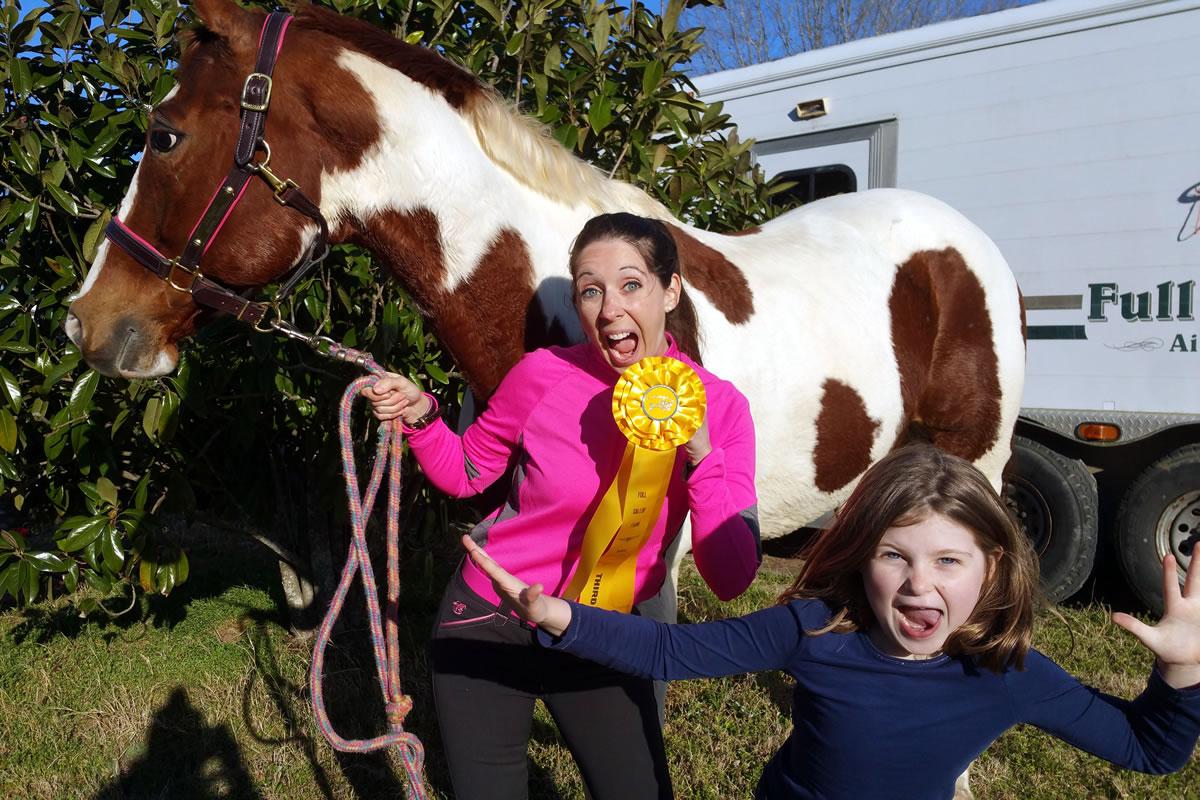 We finished 3rd out of 14! And a celebratory photobomb from my trainer’s beautiful daughter, Sidnee! Photo by Halliea Milner/Go With It Farm

Adult amateur event blogger Ainsley Jacobs has been chronicling how she finds the takeaway lesson from the good, the bad and the ugly in her equestrian experience. Her horse JJ has been rehabbing from a ligament injury for a few months, so during his layoff time Ainsley is revisiting earlier lessons in her experience. Good news — she’ll be back with a new update in two weeks! Today’s tale is from March of 2016.

Try, try again. That’s my motto for eventing. At both of the USEA recognized horse trials I had ridden in previously, I fell off – once on XC, and once in stadium. I figured if I kept at it, eventually I’d exhaust my falling off possibilities and make it through one. So, I put on my big girl breeches and decided to keep trying. Third time’s the charm, right?

We decided to do some pre-show research and drove out to Full Gallop Farm the Sunday before the event. The week leading up to that trip, however, had been one unfortunate incident after another. There was a freak trailer accident (not involving JJ, and thankfully the horses that were involved are okay), JJ threw a shoe and the farrier couldn’t get to our farm in time to tack it back on, and I hurt my hand randomly. With all the drama, our little group was really looking forward to having a fun, stress-free day of schooling. We arrived at FGF in the early afternoon – the weather was sunny and 70* – and we headed out to explore.

We kept it low-key, and only schooled each jump once. JJ was absolutely perfect and jumped everything with the appropriate level of eagerness. Despite being in a completely new place, he didn’t look at anything or even think about stopping. We also had our first set of one-tempi changes when JJ was going through some lumpy terrain and couldn’t figure out what lead he wanted to be on. I see working on schooling more flying changes in his near future.

We headed back to Full Gallop a few days later. On the way there, though, the trailer wound up getting a flat on the interstate. Normally, this would be a cause for concern and severe anxiety, but fortunately Greensboro Tire Pros was a few miles away and we called ahead to let them know we’d be coming in. They were ready for us, flagged us into a work bay, and got started on the trailer tire even before we had gotten out of the truck. The team was amazing and they had the tire changed and everything fixed up in no time at all. It literally took us less than fifteen minutes from the time we pulled in until the time we left – they were incredible! So, with a crisis averted, we got back on the road and kept on truckin’.

Due to the tire detour, we didn’t get to Full Gallop until almost 7 pm. We unloaded the horses, settled them in, and left to go find dinner. We had a great time at a local Italian place, went back to our hotels, and fell asleep almost instantly.

Wednesday morning we showed up at Full Gallop to feed and groom. I tacked JJ up for dressage (I’m always surprised at how white he looks after a bath, and then I put on our clean saddle pad and realize, no, he’s still mostly dirty yellow… oof) and wandered off to find our warm up. He was super relaxed and soft, which was a nice surprise considering we were in a new area and there was a lot for him to look at. We headed into the arena and knocked out our Beginner Novice A test fairly well and without any major arguments! We’re making progress!

Since this was a one-day format recognized event, our cross country start time was ten minutes after our stadium start time. After our post-dressage snooze, I tacked JJ up in his XC gear and walked over to the stadium arena. I had recently received the world’s most awesomely obnoxious pink sparkly saddle pad as a gift from Camryn, one of my awesome Go With It Farm team mates, and I was SO excited to be able to use it for the first time! Yeah, people were staring at us, and yeah, people were laughing at how ridiculous we looked, but I think it’s the best thing ever and loved the smiles we sparked with our sparkles.

My trainer has been letting me get more and more independent with our warm ups lately, and so I popped a few practice jumps and decided we were ready. We were the first ones into the arena for Beginner Novice, and JJ was a true partner. He gave me a wonderful round with beautiful jumping efforts, and we were double clear! I was so proud of him, but mostly excited that I hadn’t fallen off… one more phase to go before we could end the streak of recognized event disaster!

Immediately after finishing our stadium, we walked over to XC. The starter informed me I had a minute and a half until it was time to go, so I let JJ hop over one natural jump, and then walked him to the start box. He waited patiently for my command to start, and then we were off and running. To say he was a total gentleman on course would be an understatement – he was the most willing he’s ever been, and he was listening wonderfully. We cruised around at a normal-horse pace (not our typical Novice/Training pace) and cleared everything easily.

A really strong storm system had passed through the area the night before, and the water complex had filled up. JJ jumped in eagerly, but the water was deeper than either of us had expected. He stumbled hard and almost went down – he even dunked his face in the water! I lost my left stirrup, slipped to the right, and grabbed my 5-point breast plate as if my life depended on it. I was NOT falling off this time, and I was most definitely NOT falling off in the water! There was a jump a stride or two after the water that was coming up fast, but I managed to stay on, righted myself enough, steered him towards it, and opted to keep going, even without my stirrup or perfect balance. We cleared the jump, I settled back into the middle of his back, picked up my stirrup, and we continued on as if nothing had happened. I was SO incredibly proud of JJ for taking it all in stride, and of myself for staying on! It was a true “BAMF” moment.

We finished up the rest of the course without any other bobbles, crossed the finish line, and I felt such a sense of relief. We had done it! We finally finished a recognized event!!

When the scores were announced later that day, I almost couldn’t believe it – JJ and I had finished THIRD out of fourteen, AND we are now halfway qualified for the USEA American Eventing Championships!! OMG!

Quitters never win, and winners never quit. For each struggle you have, think of it as a learning moment for what not to do. Eventually, it’ll all come together when you least expect it. Also, sparkly saddle pads are the best thing ever.