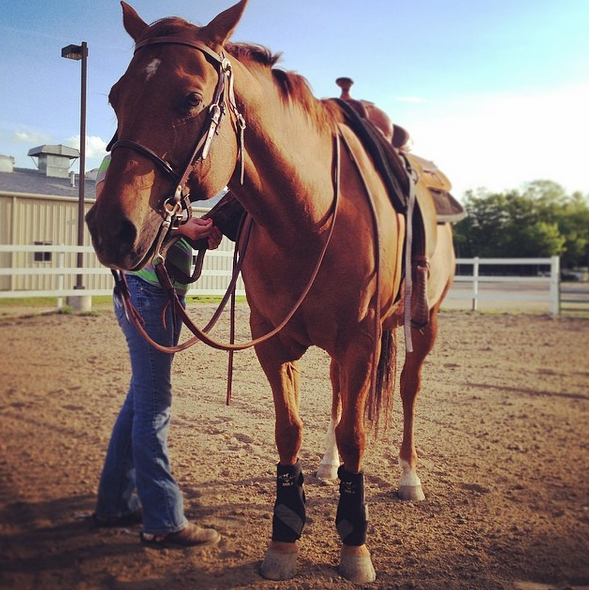 Which type is your lesson horse?

A Paulie. Actually, this is THE Paulie. Photo by Kristen Kovatch.

With around thirty western school horses, Alfred University’s riding program and team deals with diverse equine personalities on a daily basis. All of our horses are either donated or leased, and the program could not exist without them, in spite of (or perhaps because of) their varying temperaments and quirks. Using some of our school horses’ personalities as archetypes, here are five types of lesson horses.

The coach’s favorite, a Frank is capable of much more than he lets on. Without spurs, you’re lucky to coax a jog out of him, but to keep things interesting he occasionally spooks at an empty corner and jumps sideways. If you do make him work, he’s notorious for his habit of reaching around to bite your foot, especially in a show setting where he knows you can’t get after him for it. Frank puts most of his athleticism and talent towards being naughty, but everyone loves him for it and can’t help but laugh at his antics.

Wyatt is the lesson horse who’s been at the barn forever, and everyone remembers learning on him. Retired from his days as a fancy show horse, he’s happy to pack beginners around. He is the most forgiving creature in the entire barn, and deserves all the peppermints. The friendliest face in the barn, no one walks by without petting his nose and telling him how sweet he is.

Sugar is not especially talented at anything, but she has the heart of a champion. She goes in middle- and high school reining, horsemanship, and even goes to football games in costume as Alden, King Alfred’s war horse. The epitome of self-confidence, she puts everything she has into whatever she does, and comes out of the arena fully assured that she won the class.

Paulie, an old reiner whose most deeply-held desire is to be groomed for hours on end, is very safe but also knows exactly how much he can get away with. Capable of doing a tackless reining freestyle (as he did with a student in last fall’s Intro to Reined Cowhorse class), he occasionally pretends not to know how to spin during high school shows, standing calmly in the center of the arena while his rider gets increasingly frustrated.

As a sorrel mare with the registered name “Good Heavens I’m Hot,” Sarah can’t help but have an attitude. At shows, she gets her own special mounting area away from other horses and people for everyone’s safety, but once you’re on her she’s a dream—anything that goes wrong in the show pen is rider error. Despite her grumpy demeanor on the ground, she’ll carry around walk-joggers up through open riders. She seems to know the pattern even before her rider does.

Do you ride a Frank, Wyatt, Sugar, Paulie or Sarah?