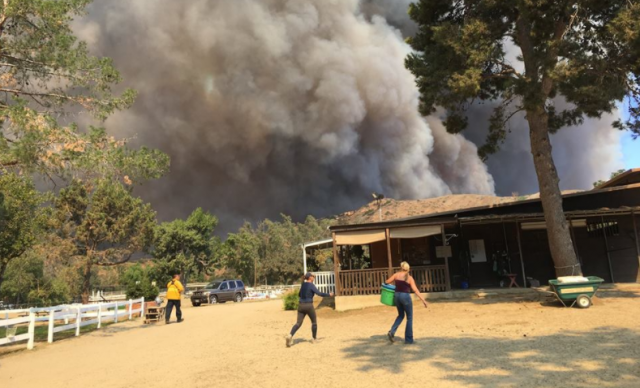 Fast-moving wildfires in California have forced the evacuation of thousands, including several major horse facilities.

A canyon fire in the densely populated Anaheim area of California has forced out humans and endangered a number of massive equestrian facilities, including the Orange County Equestrian Center. There is no word yet whether there have been specific human or equine fatalities, though most barns in the area that we can identify are reporting that their horses are accounted for.

According to the LA Times, 6,000 acres have burned since yesterday morning, and 23 structures have been destroyed. Orange County Veterinary Services was on the ground assisting with evacuations in the area, and they are reporting that Peacock Hill, Orange Park Acres, Anaheim Hills Saddle Club, the OC Equestrian Center, and Irvine Regional Park were successfully evacuated.

While we don’t know the extent of the damage to most of the facilities, we have reports that the OC Equestrian Center did catch fire and had some significant damage. This may be true for more, but it’s unclear at this time what else has burned.

The Orange County Fairgrounds have become the main evacuation point for the moment, with additional evacuees being taken in at San Bernadino Racetrack, Los Alamitos Racetrack, and the Pomona Fairgrounds.

As of this morning, they are still reporting the Anaheim Hills fire as being only 5% contained.

Aerial footage shows wildfire burning in Anaheim Hills, California; mandatory evacuations are taking place across the region. More than 2,000 acres have burned and the fire is 0% contained. abcn.ws/2xtKlmg

In Northern California, conditions are even worse for the general public, as 11 people are confirmed dead and 1500 structures have been destroyed in the wine-country blaze. Huge wind gusts caused the initial fire to hop freeways and run rampant in fall vineyards. There are horses evacuating, but no specific reports of which farms or equestrian centers might be in jeopardy.

The Napa Valley Expo has been activated as a livestock evacuation center, and numerous barns out of the way of eminent danger have offered up stalls, trailers, and trucks. Miwok Stables in Marin offered up dozens of stalls, as did Hunter Lane Equestrian Center.

Sonoma Marin Veterinary Service is coordinating haulers and evacuation sites on their Facebook Page, and Sonoma County Horse Council has been a vital resource in disseminating information as well.

Send calm, rainy thoughts to California if you’re far away, and consider donating hay, time, expertise or space if you’re in driving distance of either fire. Keep safe and we’ll be posting updates and donation opportunities as we get them.

For evacuation/emergency advice, see “Are You Ready? Creating a Disaster Plan For Your Horses“.