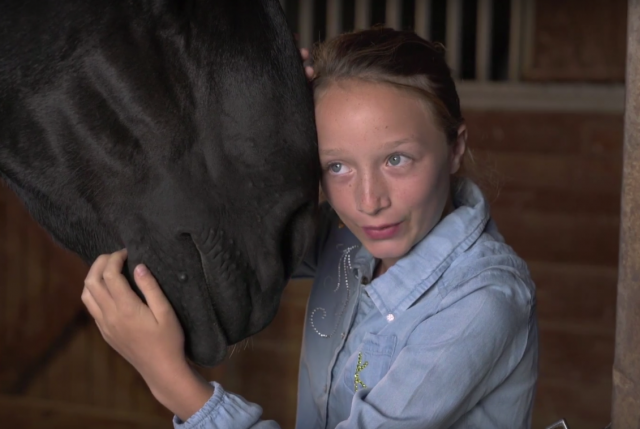 From the horse’s mouth, so to speak.

I don’t think there’s a single horse owner out there who doesn’t wonder what his or her horse would say if it could talk. Many of us talk to our horses as if they in fact another person, deducing entire paragraphs of response out of the tiniest ear flick or nostril flare. The 2016 Lionsgate production My Best Friend requires far less deduction to determine the thoughts of the horse central to the story.

Kristen (Alexis Rosinsky) is a a quintessential city girl.  She loves fashion and spends much of her free time putting together interesting outfits with her best friend Ashley.

When her father, Alan (Patrick Muldoon), sells his share in his business, he and Kristen move from the city to grandma’s (Catherine Bach’s) farm in the country. Kristen tries to make the best of the situation, but quickly finds herself feeling very out of place with no friends to talk talk to. She finds solace in Stanford, a very large, very sweet looking black horse given to her by her grandmother. On top of being a good listener, Kristen is shocked to find out that Stanford actually has a lot to say himself. With quippy one-liners and heartfelt advice all delivered in a voice straight out of the Muppet archives, Stanford helps Kristen navigate all the challenges associated with her new life.

Some of the challenges Kristen deals with seem pretty standard for your average tween girl, like what outfit should she wear to the start of the school year party that will really allow her to dance like no one is watching? Stanford knows the answer! Errr… but maybe he should have helped her choose an outfit that encouraged her to dance like at least one or two people were watching.

Then there’s boy who she can’t keep her eyes off of whether he is perfecting his roping skills or just looking dreamy next to a locker. Stanford has some words of wisdom that help her pursue this new love while not forgetting about old friends.

Lastly, there’s the evil natural gas magnate who is trying to con Kristen’s family to give up their water rights so he can frack on land adjacent to the farm. You may wonder just how much talking farm animals can know about hydraulic fracturing. More than you might expect!

Though the acting can sometimes come across as cheesy and the dialogue can seem a bit stilted, there is a lot to like about this movie. While most horse movies generally cling to one of a few well-established tropes, Kristen, our main character, breaks the incredibly well-worn mold. She isn’t an equestrian prodigy. She a isn’t spoiled, angsty, bratty kid that needs horses to discover her true inner-self. She’s just a normal, likable kid doing her best to cope with a difficult life transition. She’s incredibly relatable, and younger viewers in particular might see a lot of themselves in her. Stanford, played by a big, adorably goofy draft, is perfectly cast. He has a neck begging to be hugged and fuzzy muzzle perfect for receiving little girl kisses.

Is My Best Friend Oscar material? Probably not, but it is a family movie that will entertain the kids while not being unbearable to the adults in the room. I give My Best Friend 3 out of 5 carrots. 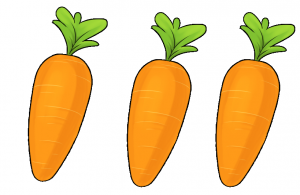