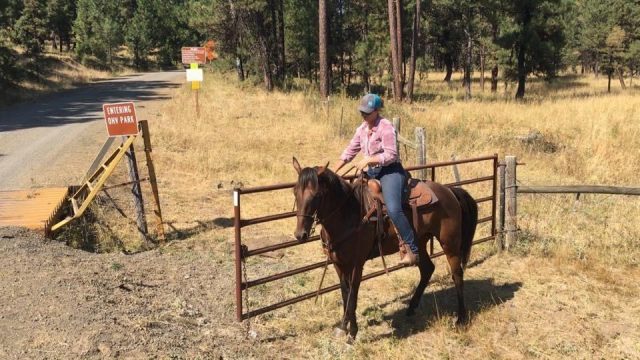 We’re just one week away from the Retired Racehorse Project’s Thoroughbred Makeover! Our spotlight trainers share their strengths, weaknesses and some advice for future would-be trainers.

With the Makeover just a week away, our RRP trainers are putting the final touches on their horses in preparation for the event into which they have put their heart and soul. As we all know, you can’t always plan ahead with horses and while some of our trainers are feeling prepared and ready, others are going with the flow, while one has had a gut wrenching incident resulting in their withdrawal from the RRP.

“Please send all of your thoughts and prayers for a speedy recovery for Giftatnoon and keep an eye out for him to be taking the eventing world by storm in December!”

Watching Gift progress has been nothing less than exciting. This feisty gelding has transformed his flatwork and was winning his beginner novice events on his dressage scores which were consistent in the 20s. With just one year off the track, Gift even qualified for the American Eventing Championships and Lauren believed 100% that she and Gift would excel at the Makeover in October.

With the AEC’s as their last hoo-rah prior to heading to Kentucky, the pair went in ready to show off what they were made of. Gift laid down a solid dressage test with a score of 31.3 on day one. Lauren knew that cross country would give Gift plenty of opportunities to become looky, but with their current tie for 12th she knew they needed to get as close to optimum time as possible. Thankfully, Gift came out of the start box with a bang and was jumping around excellently. He almost felt too fast as they zipped around the course, so Lauren allowed him to trot a circle a few fences from the finish (which unfortunately added a time penalty, but she was doing what she felt was best for Gift). After they came over the last fence, she was thrilled with how they finished the course out! 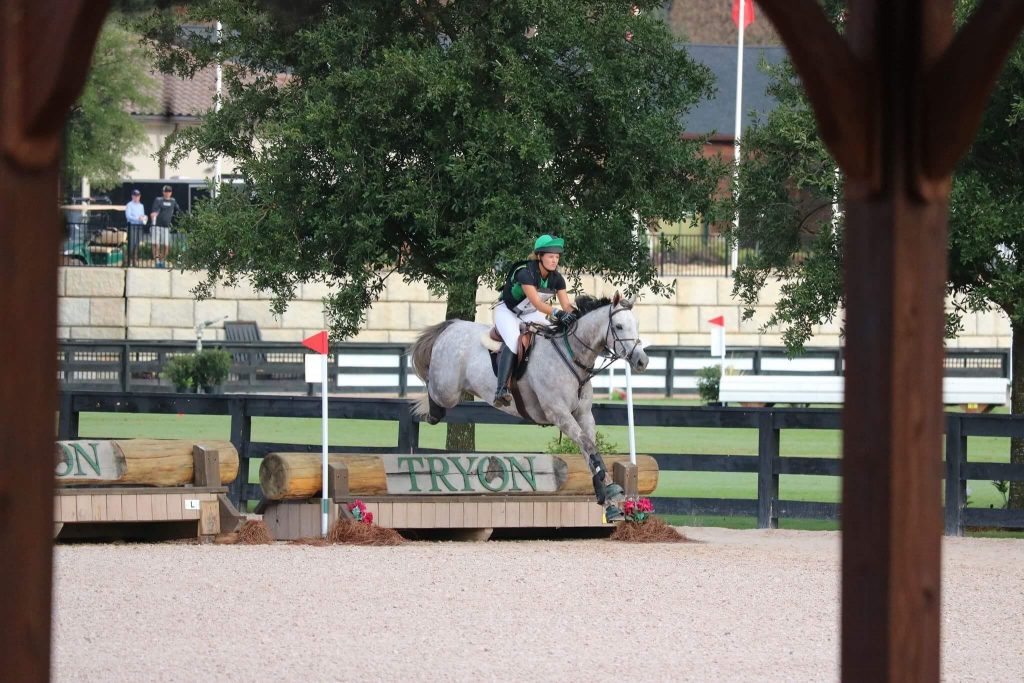 Gift giving it his all on the cross country course at the AECs. Photo by Rebecca Bowman

When Lauren went to loosen Gift’s girth, she noticed something was wrong. Gift had felt super around the whole course and never took a lame step, but somewhere on course he had sustained a laceration to his right hind that needed attention. The veterinarian team at Tryon were exceptional and were at the stalls in a flash to tend to Gift’s injury. Unfortunately, the cut was too severe to expect full recovery by the Makeover.

Lauren is gutted, but knows she has an excellent mount to continue onward with and hopes to be back on the scene with Gift come October. She asks for positive vibes and prayers be sent Gift’s way for a speedy recovery. We are going to miss seeing this talented pair at the Makeover, but commend Lauren for her great horsemanship skills and can’t wait to see where the pair go next.

“Don’t let the doubts of if your horse will be ready or anything like that keep you from enjoying every possible moment you have with your horse.”

Savannah and Bentley have been working hard with the Makeover in mind this past month. The team attended their first show mid-September and Savannah was so pleased with how he handled the atmosphere. She was concerned as her trainer was unable to attend the show with her, but Bentley showed how much he has matured during his retraining process and blew her away. He has made so much progress with his impulsion and the way he carries himself. By focusing on the Dressage Training Pyramid during their training rides Savannah has found that Bentley has become very consistent with his base which is rhythm and relaxation. 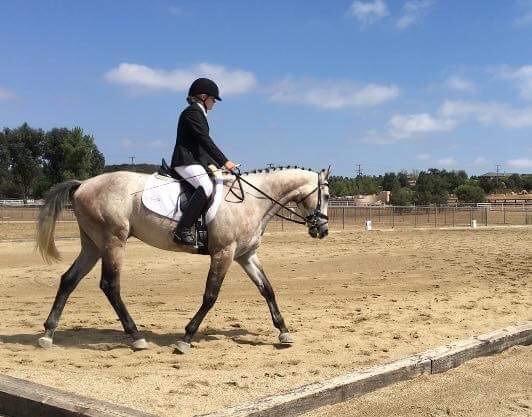 Bentley at his show debut. Photo provided by Savannah Ranes

The duo have spent countless hours perfecting their working trot, which has become Bentley’s strength. Savannah has no doubt that the working trot across the diagonal will be the highlight of their test. During their retraining process, Savannah has used the free walk as a reward for Bentley, which he has really grown to appreciate so she expects their free walk will give them positive marks as well. As far as weaknesses, she continues to work on their trot to canter transitions. Their working trot and working canter as individual movements are very solid, but the transition from one to the other can cause Bentley to elevate his head. Her plan is to keep Bentley focused and balanced during the transitions to encourage smooth transitions at the Makeover.

For those who may be considering the Makeover for 2018, especially juniors, Savannah has one piece of advice: enjoy the ride and keep it fun! She has purposely kept this process slow and has relished in doing the work on her own. Bentley may not have as many experiences as their competitors do, but Savannah does not feel that will be a reflection of their performance. Their relationship has become strong through this process, despite their rocky start. She summarizes it best with this quote, “I didn’t enter the Makeover to win it, I entered it to have fun and to show just how much I love and support the OTTBs we all adore.”

“This will be my biggest competition to date, but the best part has been the journey. I’m already planning to do the Makeover next year and have a horse in mind.”

Heather is focusing on consistency as she and Henry draw nearer to their 4,480-mile round trip to Kentucky for the RRP. While Henry has been doing very well with his training, it’s life that has been a challenge for the pair. Preparing for this cross country journey has proven to be as difficult as it sounds. Thankfully, she found another rider who she is picking up along the way that will allow her and Henry an overnight stop and some traveling buddies for the final leg of the trip.

On top of planning their long haul, Heather also has the added stress of starting a new position upon returning from the Makeover to plan around. Luckily, thanks to her military experience, she has learned to be flexible. Despite all of this, the pair made time to ride in the mountains and learn what real ranch horse life is all about. To her surprise, when the group went galloping after a herd of elk, Henry collected up and loped off at a steady pace.

At the Makeover, Heather believes Henry’s cool, calm, and collected nature will be his greatest strong point. He has the ability to adapt to his surroundings no matter where he is and has been great any time Heather has taken him off property. They will arrive the Monday prior to the Makeover to give Henry some additional time to adjust from his long trip and settle in to his new surroundings. While she doesn’t foresee Henry having any spookiness issues, she is concerned about the lack of time they have had working cattle prior to the competition. She is just a little less confident than she would like to be, but has faith in her horse as they prepare to show off all of their hard work. 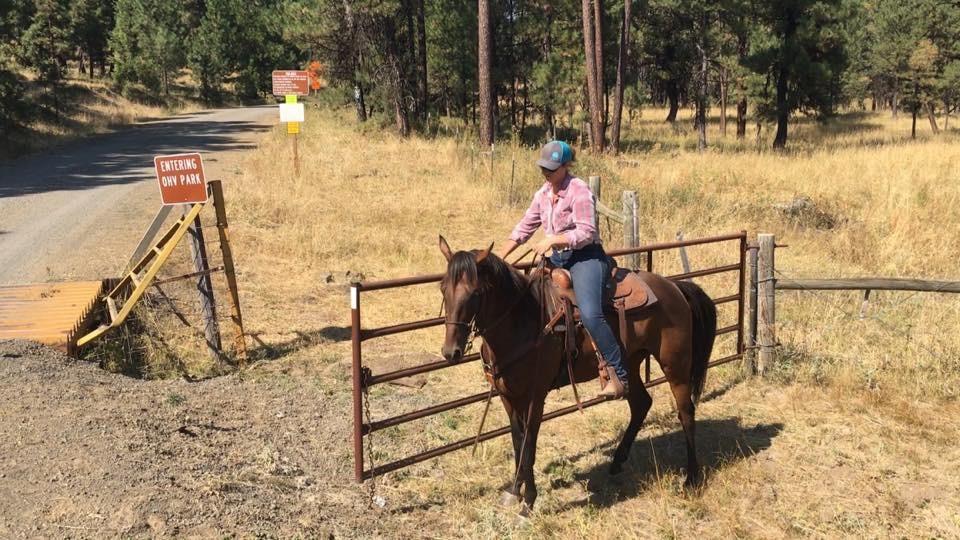 Heather and Henry opening the gate before heading out to the ranch. Photo by Kyle Nicol

Never let a busy schedule keep you from your dreams: Heather and Henry are great examples that anything can be done if you set your heart to it. Another thing Heather never let deter her was her physical distance from the Makeover in Lexington, Kentucky. She and Henry are one of two horse and rider combinations coming from the Pacific Northwest. She encourages those who are further off to still consider the competition, but to take the year to set goals each month and put money aside for your upcoming trip. Heather worked hard to make additional revenue to offset the expenses of hauling to Kentucky for the RRP.

We are one week away and man, has the time come and gone so quickly! It feels like just a few months ago we were meeting these trainers and their newly-retired track mounts and now they are off to show the progress they have made in this little time. While some of them had to take a step back and reevaluate their goals along the way, we at Horse Nation are honored to have had the opportunity to share their journey. These versatile horses have truly shown what they are made of during these past few months and we can’t wait to see how they will do once they arrive in Kentucky. Keep following along for the updates of our covered horse and rider pairs as the meet their goal: competing at the Retired Racehorse Project Thoroughbred Makeover.