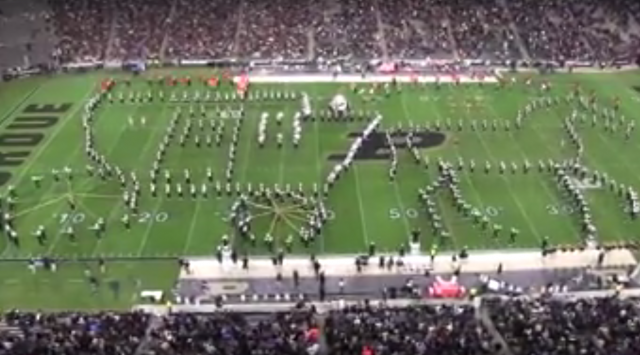 We wish the field were bigger so we could watch this thing really get rolling!

I never participated in marching band in high school, though I did run poorly on the cross-country team which practiced at the same time so we constantly had a soundtrack to listen to. I’ll admit freely that our high school marching band put in way more hours of practice than I did in cross-country and worked out in the sweltering heat of late summer just the other fall sports teams. Maybe that’s why I still have a respect for the well-oiled machine that is a good marching band, and why I get such a kick out of this video.

Watch the Purdue University band bring this horse and stagecoach to life in their wild west-themed show:

The Purdue "All-American" Marching Band created one of the greatest picture formations we have ever seen. This horse and carriage is AMAZING! Don't miss their wild west show. Watch it all here: https://www.collegemarching.com/content/purdue-takes-us-to-the-wild-west???? by Purdue Band Fan

Posted by CollegeMarching.com on Wednesday, September 13, 2017

If you found this impressive, check out the full show below, featuring famous themes from well-known westerns, a little “Devil Went Down to Georgia” breakdown, flaming batons (!!) and of course, the entire band spelling out “happy trails” at the end.

In this video the Purdue "All American" marching band performs their halftime show at the Ohio Football game at Ross-Ade stadium on September 8, 2017

Thanks to Ellen Attridge for the tip!