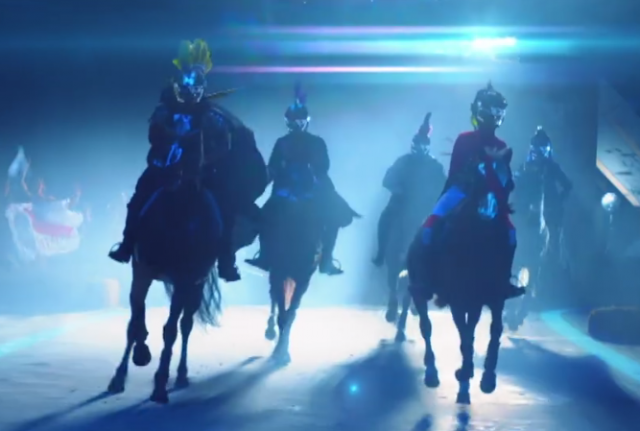 Featuring a (perhaps literally) underground horse race with elements of Tron and maybe Casino Royale. Something like that.

Okay, okay, so this video actually came out nearly two full years ago, but since I live partially under a pop culture rock (I’ve got way too many horses to spend time trawling YouTube or MTV, folks, sorry) this video didn’t appear on my radar until reader Chris Tab sent in a tip: “How did I miss this video! Sia, David Guerra and horses, it does not get any better!”

No worries, Chris, it totally whizzed right by us too. But we’re making up for lost time and sharing it now.

The plot, backed by David Guetta’s mix featuring Sia and Fetty Wap, circulates around gambling: Guetta loses big-time in a glitzy casino, where his lady friend is visibly disappointed in him. Equine imagery is present throughout, but we then discover that the lady friend is herself an equestrian — which would explain why she was so crushed that this gamble fell through; horse folks have bills to pay and blowing all that cash on a stupid card game is just plain irresponsible.

Fortunately, our heroine has a plan to win back Guetta’s lost money: an underground, part dystopian future/part Tron-esque horse race complete with some epic decisions in helmet design.

As with most “futuristic” imagined technologies, we can’t even begin to fathom what kind of technological readouts you would need to help you function during a horse race where it appears no one is moving faster than a steady canter, but maybe we’re just old-fashioned traditionalists. Having laser beams for eyes in your steed might come in handy though.

And we won’t even begin to talk about that crazy finish line. We’ll just say that all of those people who did the ground work with the car wash-inspired streamers and plastic sheeting are probably feeling pretty darn smug right now.

But hey: horses. Many points to David Guetta and team for keeping horses mainstream.