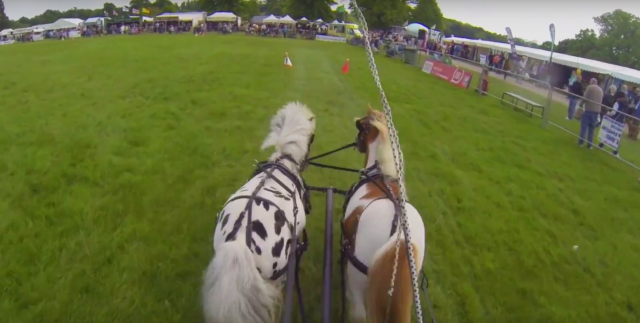 The only thing louder than the choice of music for this video is the coat patterns on these baller little ponies.

If fine harness is the well-dressed older cousin with the 401k, matching spaniels and pearl necklace, then scurry driving is the raucous younger sibling who listens to music too loud and always seems to be getting into trouble with school administrators. Scurry drivers need to have the same finessed, obedient equine partner, but they also need to let ‘er rip when needed to make time. A perfect illustration is the video below.

A pure scurry race involves the driver putting his horse, pair or four-in-hand through sets of cones topped with a ball. Should any of the balls be knocked down during the course, penalties are assigned. This particular competition includes trial gates like you would also see during an indoor or marathon competition, which often require a little help from the navigator to sort out.

As an aside, this epic music is what I imagine ponies like this would listen to had they the ability to select their own soundtrack. After all, no one believes a pony is more [email protected]$$ than a pony himself.