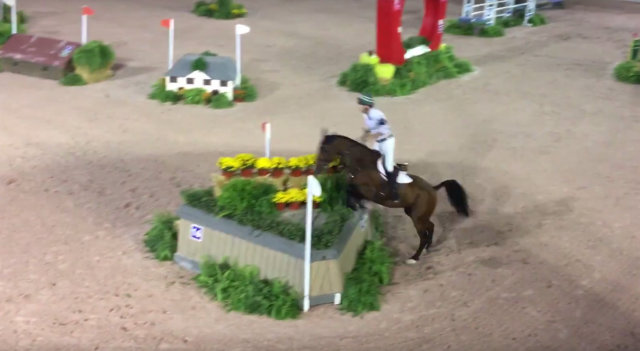 When the eventers come to town, you know it’s going to get a little bit wild — and last Saturday’s Central Park Horse Show Relay Arena Eventing was no exception.

In one of those “this is so crazy it just might work” kind of scenarios, the Central Park Horse Show held the first-of-its-kind relay arena eventing class on Saturday night under the bright lights in the big city. Over a track that seemed impossibly complex in an arena that seemed impossibly small, 12 teams — named after iconic Manhattan neighborhoods — turned themselves inside-out to put on a show for a sold-out crowd with everyone, from spectators to the competitors themselves, whipped into a frenzy thanks to eager commentary.

Teams consisted of pairs, riding in a relay format: over a combination of stadium fences and solid cross-country jumps, one rider tackled Captain Mark Phillips’ twisty course and as soon as he or she finished the second rider could start. The top six teams after an initial round would come back in for a jump-off.

The winning team was East Village, made up off Australian eventers Ryan Wood and Dom Schramm. Watch their daring, go-for-broke jump off round:

Yikes! If you didn’t go white-knuckle during that round we’re not sure what else to show you to get your heart pumping.

Eventing Nation’s Leslie Wylie reported from the relay arena eventing, so for further in-depth coverage mosey over to our sister site.