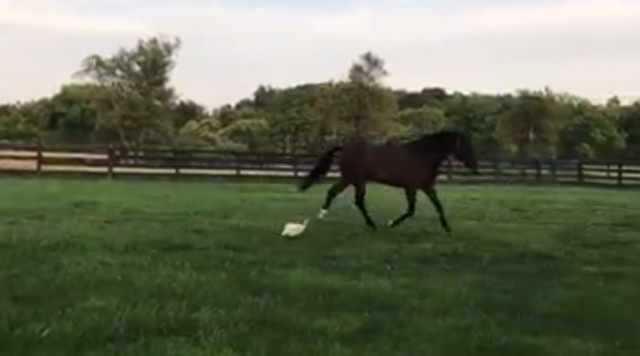 Ever find it tough to get motivated in the morning? We know exactly what you need: a guinea hen drill sergeant. Meet the Bird.

The good people at Steplin Sporthorses are exactly the kind of folks we want to be friends with: they’ve got great horses, a lovely facility and a smoking sense of humor. And apparently they also have fowl with a wicked sense of humor as well. Meet the Bird, a white guinea hen also known as the Drill Sergeant.

Cappy and his personal trainer..the Drill Sergeant Guinea hen is on duty to be sure he stays fit!!! They really are friends but this is a daily game they play.

Cappy and the Bird seem to have a pretty good mutual understanding going on here. We can hear Cappy thinking, “fine, I’ll trot around a little so you won’t peck me in the fetlock, and eventually maybe you’ll get tired and go away.”

Meanwhile, the Bird is probably thinking “HAHAHAHAHA I CHASE YOU LARGE HORSEBEAST RUN FROM ME I AM DESCENDED FROM DINOSAURS.”

Whip and the Bird

If you thought the Bird only provided exercise for Cappy…think again! He encourages all visitors to get their workout!

For a few moments as Whip exercises his power to kick out, I was saying a little prayer for the Drill Sergeant that he or she wasn’t about to meet an untimely end due in part to being shaped like an angry football, but the little guy (or gal) manages to escape unscathed.

Look out for birds. And go riding.