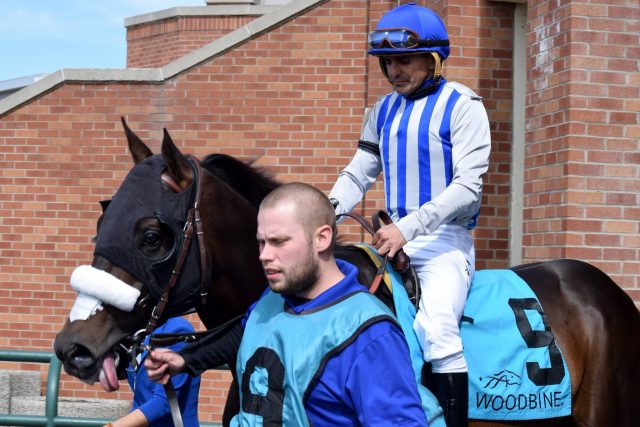 Behind every Thoroughbred, from the champions to the local claimers, is a groom cheering them home. We speak with Gord Walker to get the details on this behind-the-scenes but critical role. 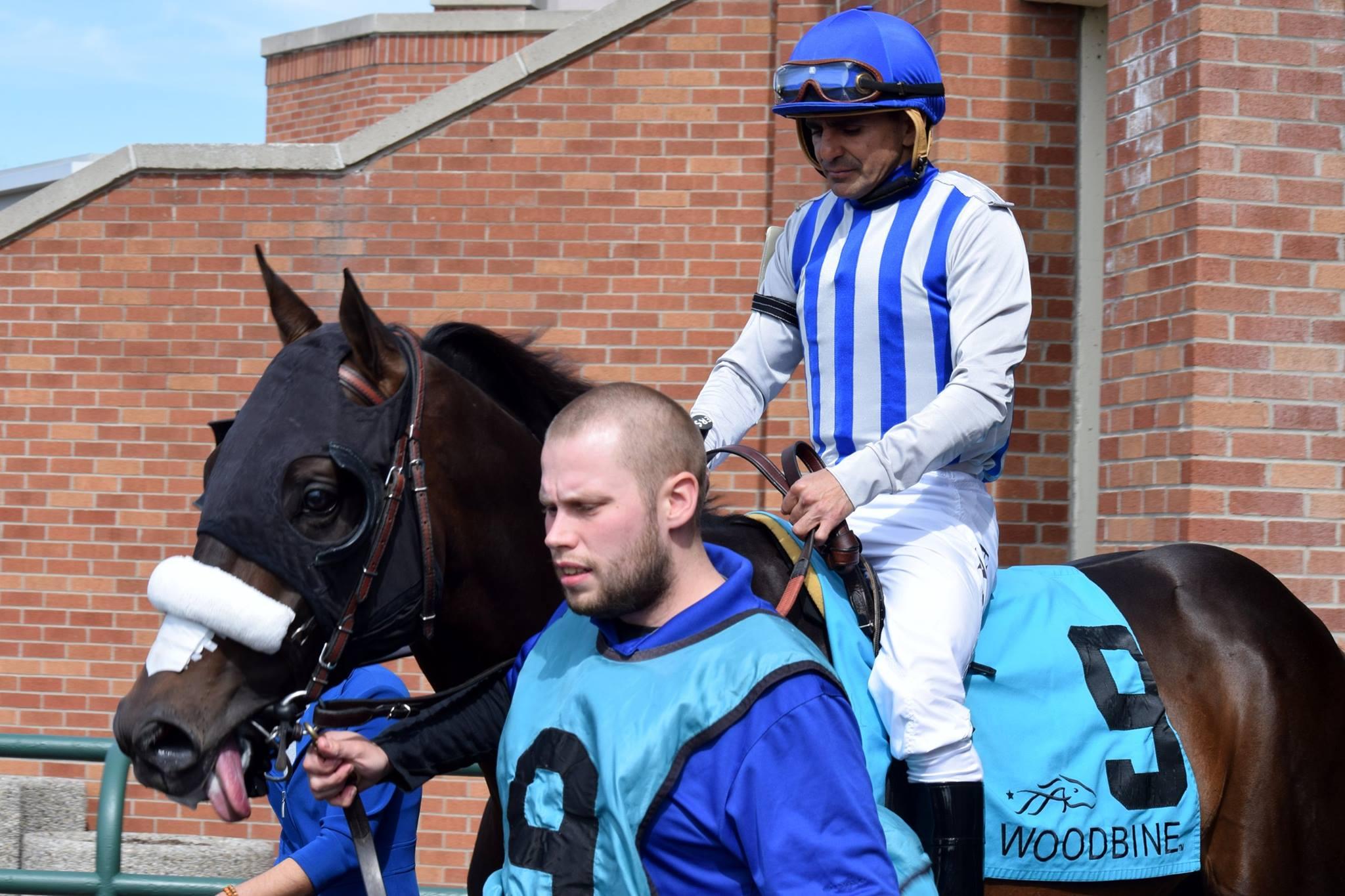 Nowhere does the saying “it takes a village” apply more than in horse racing: for each Thoroughbred that steps foot on the track, there’s a team of people working together to give that horse every opportunity to become a champion. Some of those individuals fill more high-profile roles: the trainer, the jockey, the owner. Others, however, work hard behind the scenes in roles of equal importance. One of the most critical jobs in the racing industry that flies largely under the radar is the groom: we spoke with groom Gord Walker to learn more about his life in the industry and the important role that he plays for the horses under his care.

Like many in the racing world, Gord’s family was heavily involved in the industry already: his father was a jockey while his mother was a trainer, and between his parents’ involvement and the attraction of the horses themselves Gord stepped right into the industry. He’s been working as a groom since 1999 and has worked at a variety of tracks under several trainers: Northlands Park in Edmonton, Alberta; Hastings Race Course in Vancouver, British Columbia; Woodbine in Toronto, Ontario; Fort Erie in Ontario; Tampa Bay in Florida; Keeneland in Kentucky; and Thistledown in Ohio.

“Keeneland has to be my favorite,” Gord adds. “It’s absolutely gorgeous and there’s a lot of history.”

A day in the life

A typical day for a groom starts around 4:00 AM: they’re usually the first ones in the barn. Gord starts his day by greeting each of the horses under his care — usually it’s five horses to one groom; some trainers prefer to have four horses to one groom. Gord removes the standing bandages from his horses and pulls their water buckets and feed tubs for scrubbing so they’ll be ready to go when the horses return from training.

“If I have enough time, I’ll start mucking stalls before the horses go out to train, but it depends on the daily schedule,” Gord adds. There’s a lot of time management that goes into the job to ensure that horses are ready exactly when they need to be: a horse scheduled to train at 6 AM should start getting brushed, wrapped and tacked at 5:30.

“After that, my day just gets super busy: I’m bathing horses when they come back from training; then they cool out for about 20 minutes before I wash their legs. After all five of my horses are done training, I’ll go back in and groom them individually, then set them up with bandages. It depends on the individual horse and trainer if they get two or four. We report any cuts or swelling to the trainer, and then we’ll take care of that and apply any medications.” 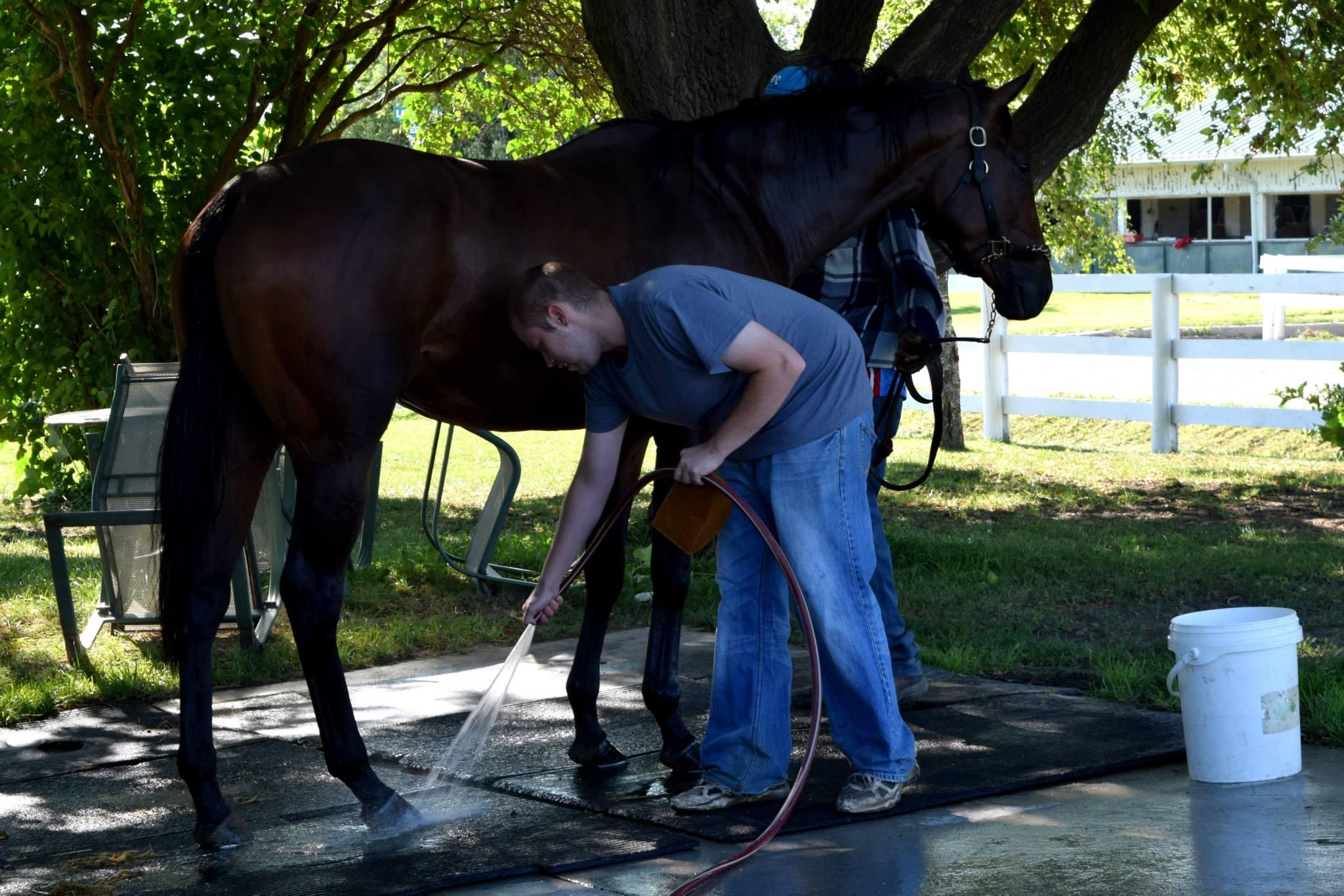 After a workout. Photo by Mr. Will Wong

Grooms rotate the evening feed; usually each groom comes back two or three days a week to feed dinner — and that’s the schedule for just a training day. Race day is a whole different animal.

“The process of running a horse might start four hours before you run,” Gord details. Many North American horses run on Lasix, which is used to prevent exercise-induced pulmonary hemorrhage, or EIPH — referred to simply as “bleeding.” Lasix is administered hours ahead of time, so grooms will make sure they’re on schedule.

Time management again serves a critical role: “Say your horse is in the seventh race; you’ll start getting ready after the fifth runs,” Gord details. “I’ll tie the horse up to the wall and rinse his mouth with water to make sure there’s no hay or feed still in there. The whole time, they’re calling how long until the next race, so let’s say at 15 to race six, I’ll clean the feet and get the horse bridled. I’ll bathe them and then start walking them to the grandstand. At the paddock, the trainer will saddle the horse with a valet, and then they’ll meet with the jockey as I walk the horse around until riders up. After the race, I’ll bring the horse back to the barn; the hot walker takes over for about 45 minutes and then I’ll wash the horse and do them up in bandages for the night.” And then everything starts over again the next morning at 4:00 AM. 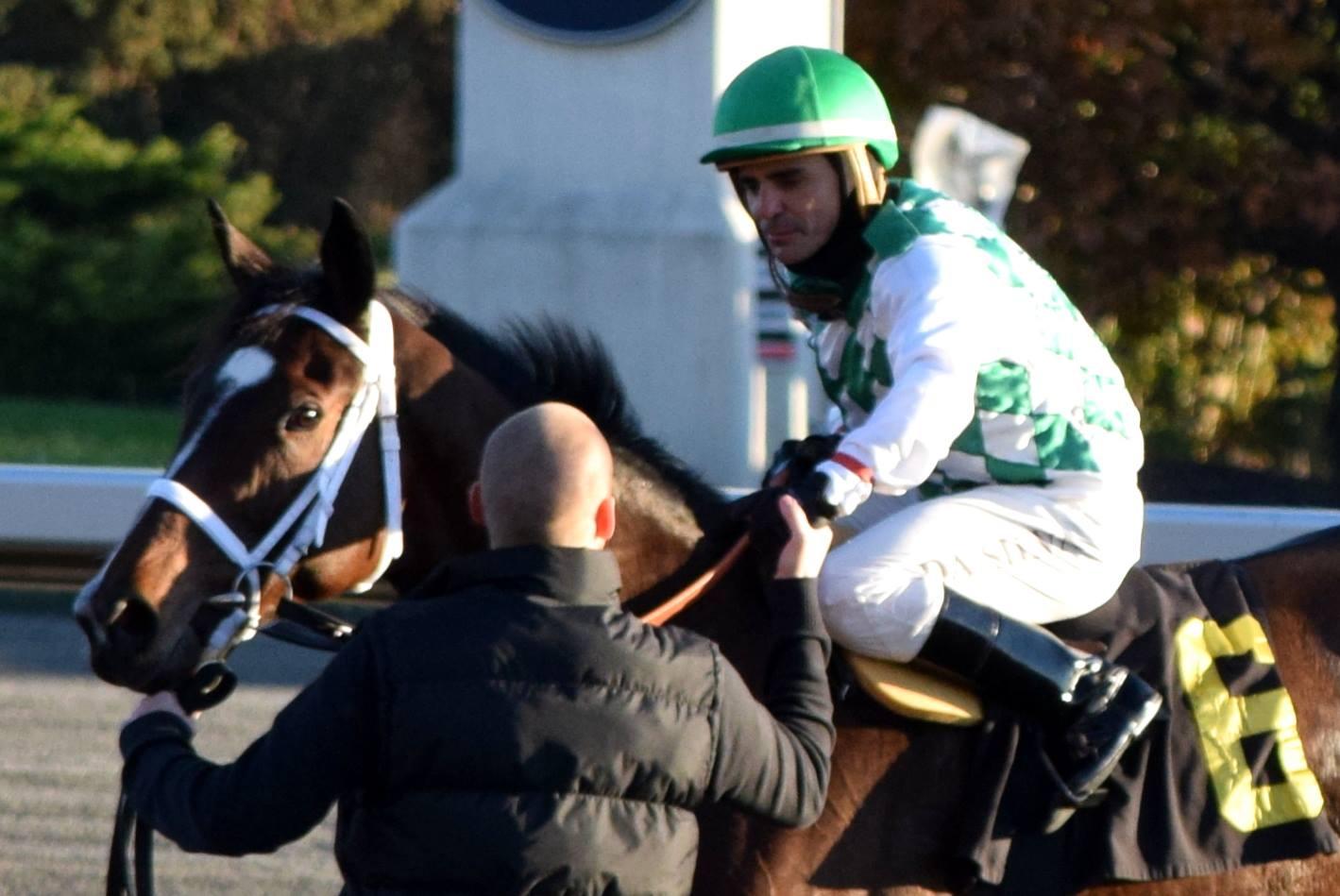 Photo by Mr. Will Wong

There are a lot of moving parts in a racing barn: Gord’s worked for some larger operations, with 60 horses and one groom to every five animals; other barns are just eight horses with two grooms employed. Grooms are hired by trainers. No matter the size of the barn, however, Gord details the roles that stay the same: exercise riders, who ride the horses in morning training to make sure the horses get around safe and accomplish what the trainer asks; the hot walkers, who walk out horses after they train and race and also help keep the groom safe while horses are getting bathed; jockeys, who typically are only in the barn when it’s time to breeze or to meet with trainers; veterinarians, who administer some medications or check on injuries; and blacksmiths who of course keep horses trimmed and shod and ready to run. The grooms will assist the vets and farriers in addition to their daily duties.

In his career, Gord has worked with plenty of horses: some he remembers for their cantankerous personalities, some for being sweethearts. But his standout favorite is Medidocihospisurg, a chestnut gelding by Thunder Gulch, who raced from 2008-2013. “I took over grooming him in 2012, when he was only running for $20,000. I was able to win a stakes race with him. Each time he ran, we would listen to a certain song by Drake and he got so pumped up he would be excited to go over and run.” 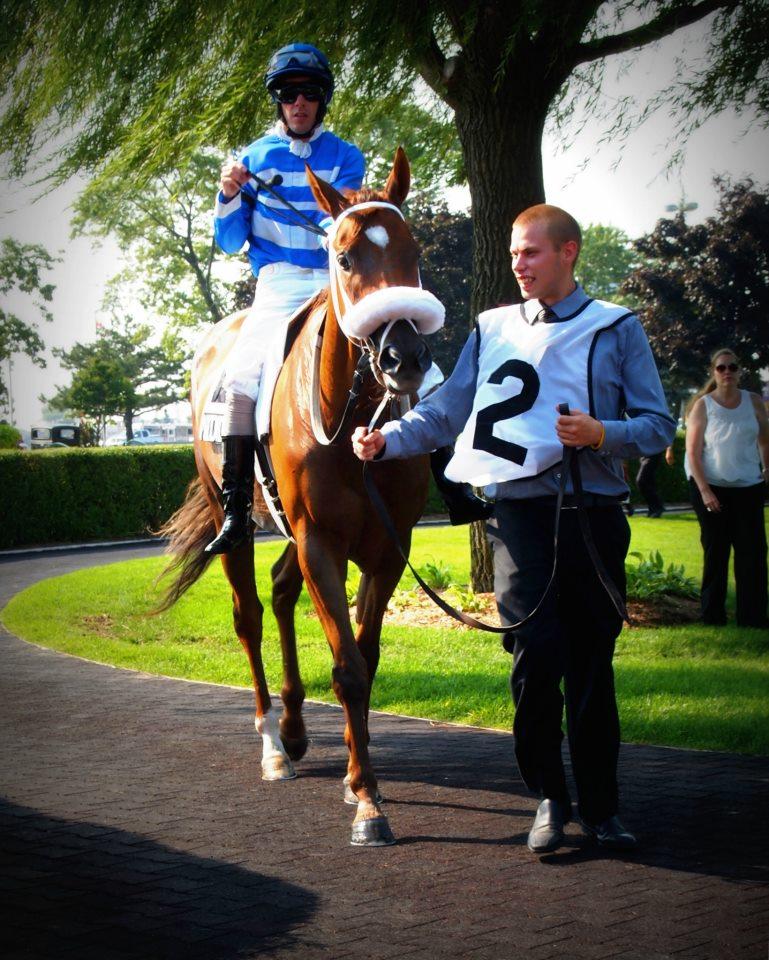 Gord and Medidocihospisurg in 2012. Photo by Mr. Will Wong

It’s these bonds that are forged between grooms and horses that make the job so rewarding for Gord. “I love coming in every day and seeing the horses I’ve worked with, sometimes for years. There’s nothing better than seeing a horse that you’ve put so much hard work into crossing the wire first.”

The job has lows to match the highs, however. “The defeats are the worst — you’ll think your horse is going to run extremely well and you have so much confidence in him, and then realize that maybe they weren’t up to it that day and they run poorly. When a horse gets hurt, that breaks my heart. I love the horses I work with.”

“The groom really builds the bond with the horse,” Gord describes. “The groom is the one that comes in every morning, knows the horse’s eating habits, how clean the stall should be or shouldn’t be. At the end of the day as a groom I should be able to look at the horse and know immediately if something is wrong.”

Gord is quick to credit his fellow track workers behind the scenes, too: “It’s not just about the grooms — it’s a team effort with the exercise riders and hot walkers to really care for the horses. We might not get a lot of credit, but without grooms and these other people the business wouldn’t run.” 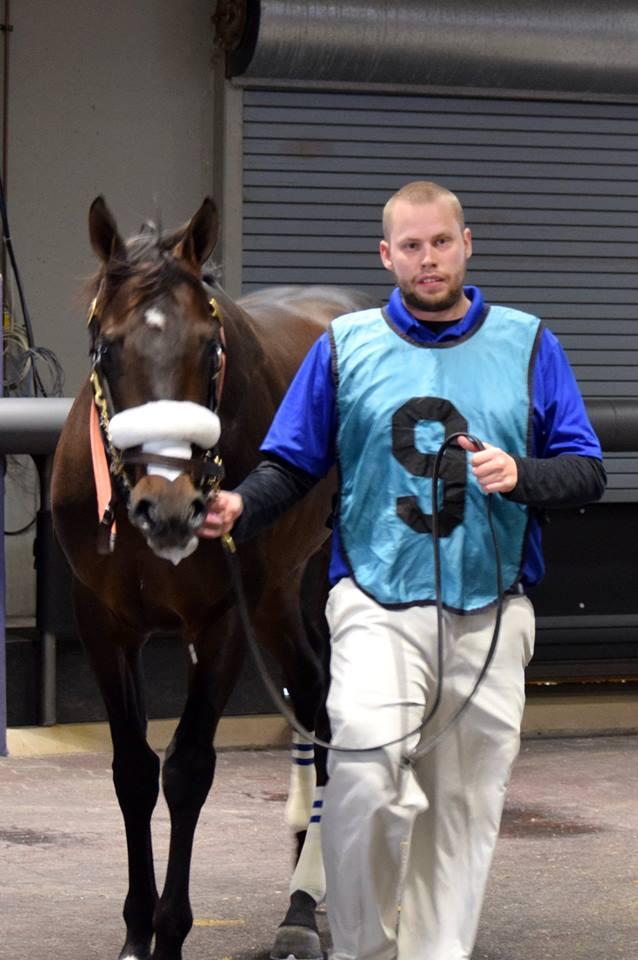 Gord and Noble Thought. Photo by Mr. Will Wong