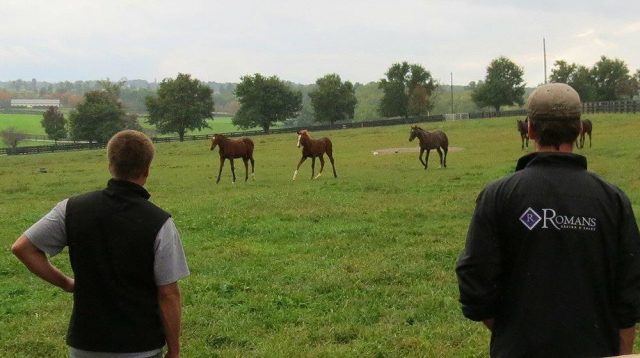 Photos went viral last week of a young man named Billy Crouse heroically anchoring a young colt at the Keeneland Sale. Meet the man behind the images: we caught up with Billy to learn more about his facet of the industry!

The internet has been abuzz with the viral photos of Hip 274 bolting through the crowds at the Keeneland Sale last week. Despite the colt galloping amongst other horses, the crowd of prospective buyers and plenty of foliage his handler, Billy Crouse, in a true feat of heroism, held on and ran alongside the horse until he could get the frightened colt to a stop. Horse Nation caught up with Billy to talk about this act of horsemanship and how he found a career in the Thoroughbred industry.

Thoroughbreds are in Billy’s blood. His grandfather Marvin “Junior” Little was a prolific small breeder, with some of his horses taking on top honors such as wins in the Preakness, Belmont and Kentucky Bluegrass. From that point on, most of Billy’s family followed along in his footsteps and found themselves in the business of raising racehorses. Growing up, Billy was immersed in the industry, but he did opt to step back and attend the University of Kentucky after graduating high school. “I entertained the idea of a normal job for a while,” Billy shared, “but somehow found myself coming right back to it.” 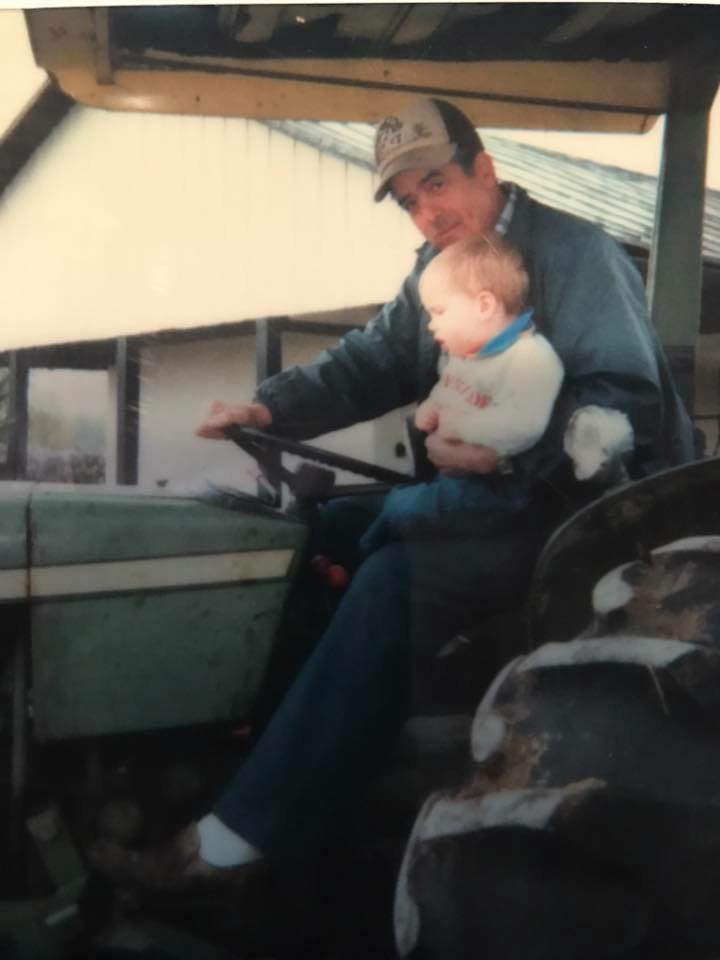 A young Billy with his Grandpa. Photo provided by Teresa Little

Billy had the opportunity to take on the role of farm manager at Romans Farm owned by Dale Romans in the heart of horse country in Lexington, Kentucky. There, he continues his grandfather’s legacy alongside his mother Teresa Little, who serves as the general manager, and his cousin Taylor Little.

“I love the challenge,” Billy said of working in the racehorse community. “It is so multi-faceted and a bit unpredictable. At times we can have over 150 horses and each of them have their own individual personalities, needs, and wants.” With their primary focuses being on breeding, sales, and layups, those 150 horses can vary from broodmares to foals or yearlings, horses in on consignment or horses there for rehabilitation. While varying personalities and needs can be a bit of a task, Billy finds the work exciting and rewarding. “It is pretty gratifying raising them and seeing what they become, especially if they go on to be successful racers.” 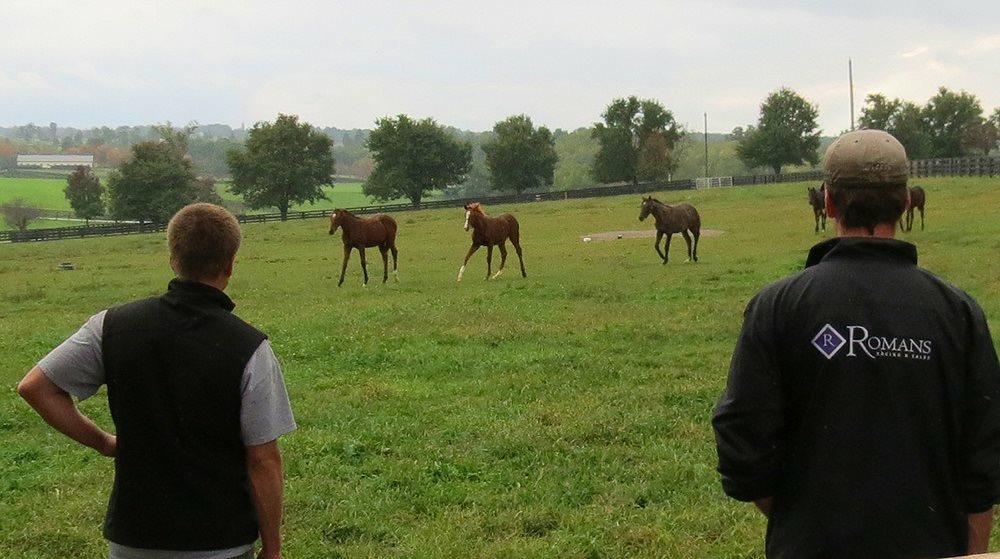 Keeping a watchful eye on the young stock at Romans Farm. Photo by Davis Innovation.

Known for its historic presence, the horse sales at Keeneland hold almost as much notoriety as many of the big name races themsleves. Beautiful horses march around the paddocks, showing off for potential buyers who are seeking their next big winner. In his position, Billy takes quite a few horses to Keeneland each year, many of which are on consignment through their operation. For the month of September, Keeneland hosts its prestigious yearling sales which allow trainers and owners the first shot at what could be their next champion. These future racehorses sell anywhere from just a few thousand dollars upwards to a million or more! This yearling sale has brought about several young horses sold in the mid-two millions, including Hip 49: a Tapit colt who sold for $2.6 million.

It’s not as easy as loading up the young horses up on a trailer and showing up to the grounds, Billy and the crew at Romans Farm put forth a lot of effort in the months before. First and foremost, they have to evaluate each horse that comes into their program and nominate them for a certain book at the sale. The placement of each horse into a particular book is extremely important, as it can have a major factor on their overall value. Book Number One is the most prestigious book, where you will find the horses with impressive pedigrees and the performance/looks to match. Even the young horses in Book Six bring excitement to the auction, however, and it is up to the team at Romans Farm to place the horse amongst the best competition, so to speak. 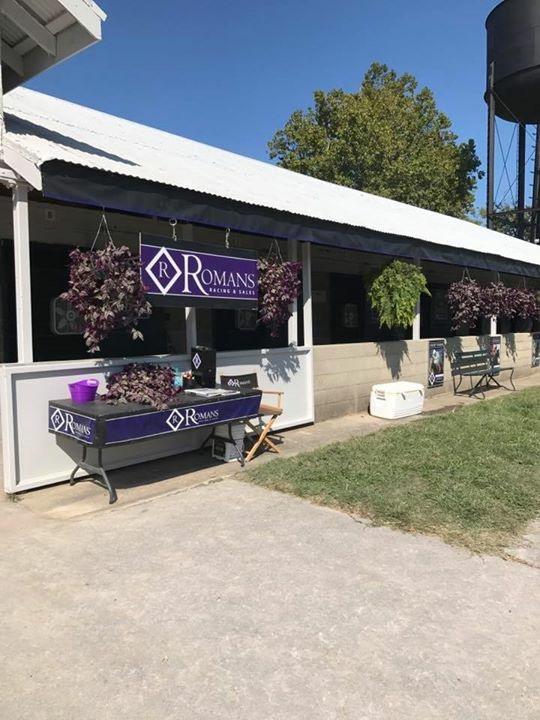 Much like the hunter/jumper industry, all of the consigners deck out their stall fronts at the famous Keeneland sale grounds. Take a peek at the beautiful Romans Farm display. Photo by Teresa Little.

“All of our sale horses stay inside during the summer months from 7 AM to 7 PM to keep their coats bright,” Billy shared regarding their preparations for sales such as Keeneland. Their horses are also groomed daily and get to enjoy frequent bathing sessions during their stay at Romans Farm. In addition to their basic care, the horses are conditioned through swimming and daily hand walking sessions of about 45 minutes. Each sale horse must shine in their own way to captivate a potential buyer, and the hard working team at Romans Farm tailors their program to each horse.

The days start early at the Keeneland sale grounds with Billy’s team arriving at the barns around 5:30 in the morning to prep horses for showings. From the moment their boots hit the ground, they don’t stop moving for the rest of the day. Their mornings start with the basics: stall cleaning, walking the horses to allow them to acclimate to the environment and bathing. After their baths, it’s back out to walk and soak up in the excitement of the property while they dry. Then it’s time for the final touches! Each horse gets groomed to perfection so they will shine during their showings, which Billy still enjoys doing himself. “We sometimes do 75 to 100 showings a day. I could easily have someone else show them, but I’ve been doing it for so long it’s just part of the day for me.”

Horsemanship at Its Finest

That day started off like any other typical day at Keeneland for Billy as he led Hip 274, a consignment colt by Violence out of Golden Say, by Golden Missile, to the pavilion early in the morning to allow the buyers a little extra time to take a peek at him. “The environment can be really overwhelming,” said Billy. “There are people everywhere. It was such a flight instinct, really.” Billy admits the colt got a bit of a jump on him when he suddenly reared and turned to the left, while Billy was working and showing him from his right. “He just exploded and I was in a bit of an unfortunate position being on his right side. I just thought to myself, ‘this horse can’t get up to the pavilion!’”

While many horsemen would’ve been caught off guard by the situation and lost control of the colt, or just let go out of fear, Billy held on as Hip 274 darted around people and other horses at a dead sprint. “In these moments, it is just complete muscle memory,” Billy said with a laugh. “It’s all instinctual. I didn’t really have time to think. We definitely went a bit father than I expected we would.” Despite the commotion, Billy was able to get a handle on the colt and lead him back up to the show pavilion unscathed.

The ups and downs of the industry have definitely weeded out its fair share of hopeful horseman, but the love for the horses is in Billy’s blood and he doesn’t plan on going anywhere soon. The support of his family and the memories from working with his Grandpa as a child definitely keep him going when the days get long. The horses also make an impact — horses like Cherry Wine. 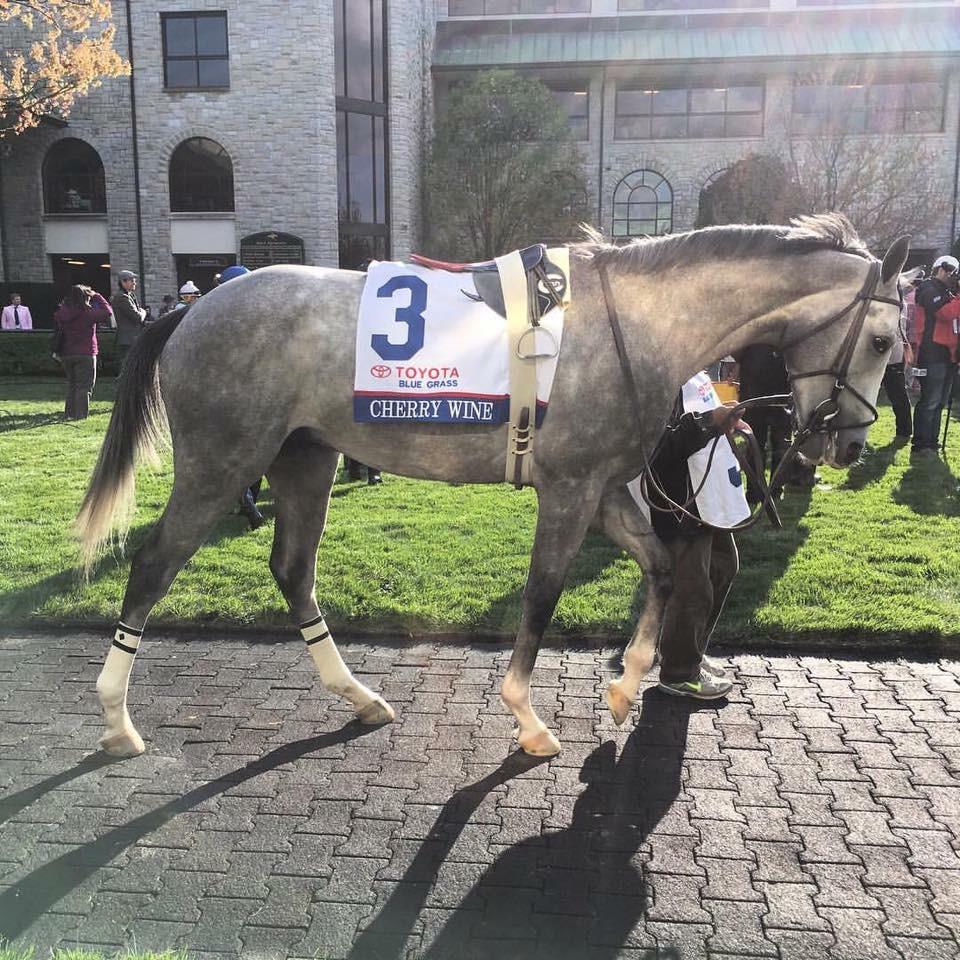 Cherry Wine, one of the more influential horses in Billy’s career. Photo by Darci Brown

Cherry Wine was a tall, gangly Thoroughbred — not necessarily indicative of his pedigree. “I had the hardest time keeping weight on him and when it came time for the sale, he just wasn’t ready,” Billy reminisced. So they decided to keep Cherry Wine on-site and put the time into him that he needed. That decision would later prove to be worth its weight in gold when the horse racked up over $1,000,000 in winnings. “He was such a good colt, just a nice guy. My nine-year-old niece could lead him around. They definitely know when something is up and when they need to behave.”

“We all work so hard,” Billy continued. “My cousin Taylor, my mom, all of us at the farm. We are so appreciative of the opportunity to share this story.” 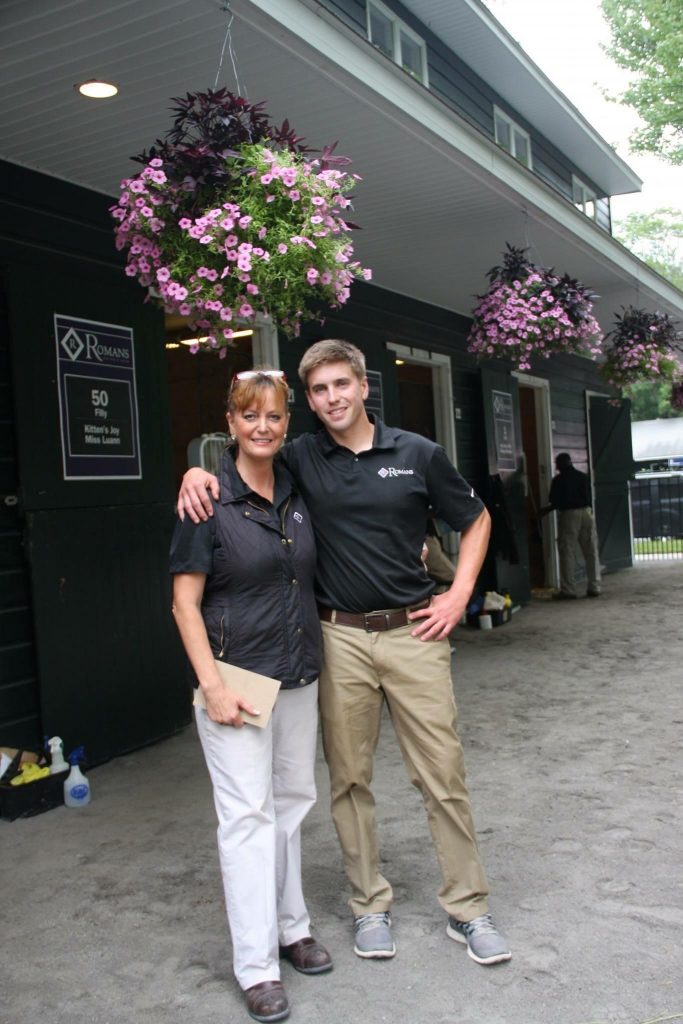 While Billy and his family have made a career in the Thoroughbred industry, they enjoy the quality family time they spend with one another keeping their families heritage alive. Photo provided by Billy Crouse.

The story of Billy’s family history in the racing community is ongoing and the act of excellent horsemanship on his part was definitely worth of sharing. For now, Billy is back at the farm doing what he loves most every day — watching horses step up to the plate to be champions and knowing he had the opportunity to take part in their foundation.