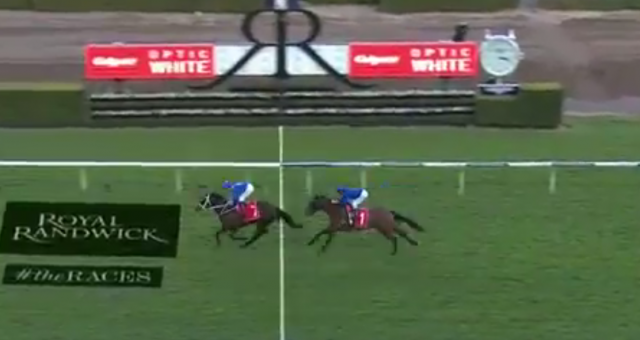 Australian superstar mare Winx won her 20th race in a row on September 16, 2017 with victory in the George Main Stakes. Watch her daring win here!

The internet has pretty much run out of superlatives to describe Winx, the six-year-old Street Cry mare who has grabbed the Australian racing scene and refused to let go. Winx racked up her 20th straight win over the weekend in the Group 1 George Main Stakes — also called the Colgate Optic White Stakes due to sponsorship.

But it wasn’t an easy stroll for Winx. All the way into the homestretch, it almost looked as though the incomparable mare simply wasn’t going to fire. But when she did, the race was hers.

Happy Clapper, the second-place finisher, made a go of trying to hang on but Winx shook him off in just a few strides. Happy Clapper remains a Group 1 maiden. Winx demonstrated again that she can win with basically everything that racing can throw at her: firm tracks or wet, good starts or poor, varying running styles, and more — her jockey Hugh Bowman even dropped his whip in her 19th win and she was able to gun down a 10-length leader anyway.

Winx will likely race once more before heading to the Group 1 Cox Plate, where she will attempt to join Australia’s Kingston Town as a three-time Cox Plate winner. Rumors are also circling that Winx may be headed for a European campaign in 2018, which would fulfill the dreams of many fans who believe there isn’t a horse left in Australia who could beat her.

Congratulations to Winx and her connections!