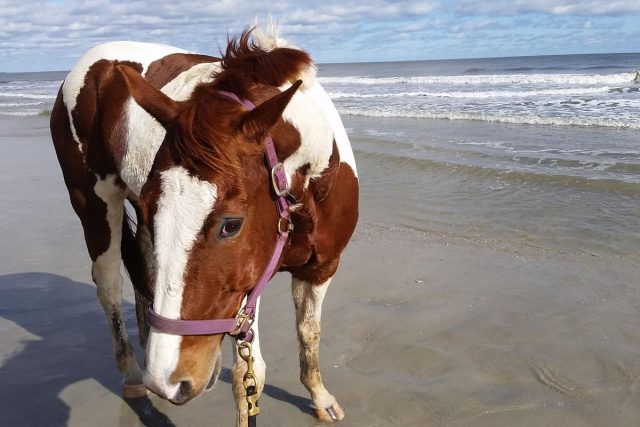 Ainsley Jacobs and her JJ got to experience every horse lover’s dream: riding down a beach in the sun and the surf! 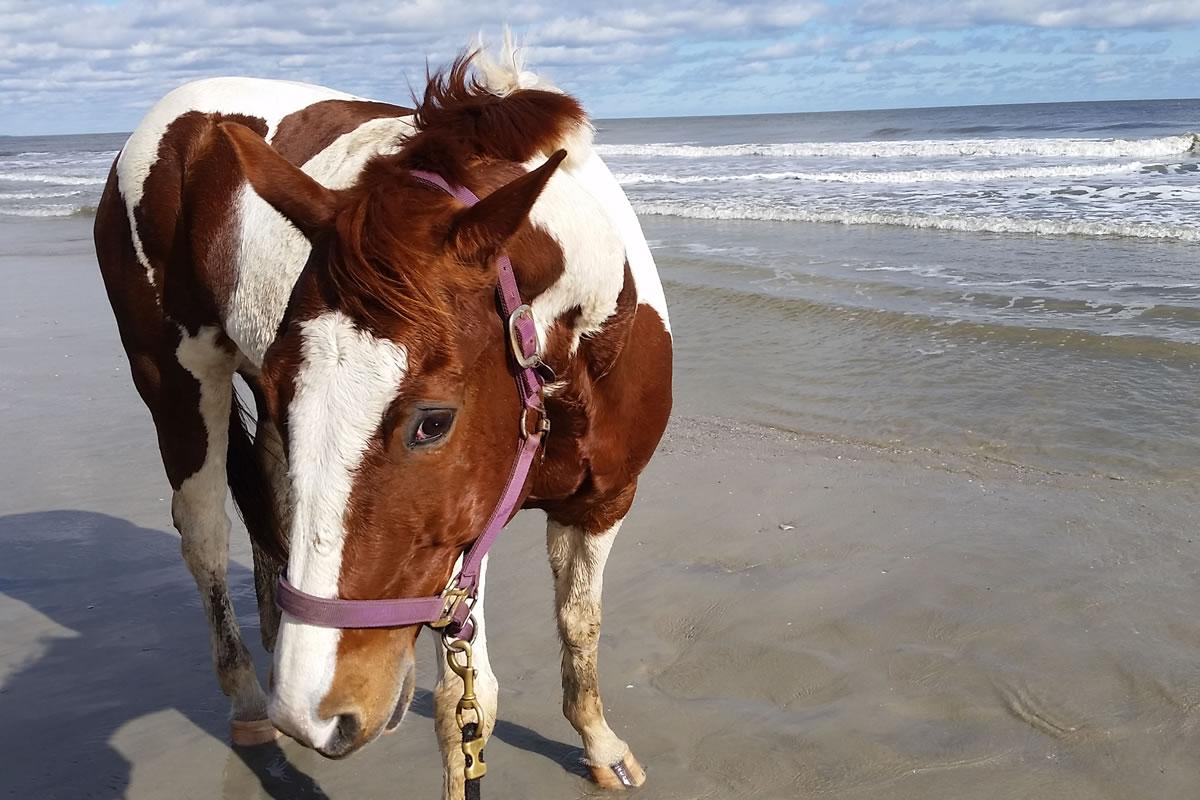 JJ says: “No, thank you. I do not like this beach thing.” Photo by Ainsley Jacobs/Ride Heels Down

Adult amateur event blogger Ainsley Jacobs has been chronicling how she finds the takeaway lesson from the good, the bad and the ugly in her equestrian experience. Her horse JJ has been rehabbing from a ligament injury for a few months, so during his layoff time Ainsley is revisiting earlier lessons in her experience. Today’s tale is from December of 2015.

Sometimes it’s fun to get out of the arena and try something new – whether that’s a new discipline, or a drastic change of scenery. As our Go With It Farm horsey road-trip adventure weekend of awesomeness began winding down, we hauled our ponies to the beach for some fun in the sun, sand, and surf.

Before we tacked up, we decided to let the horses see the water. JJ had never been to a beach before (at least, not that I’m aware of) and was very, VERY confused by the waves rolling in at him. He initially approached the water confidently, then jumped back, startled, when it came “at” him. His surprise was absolutely adorable, and I spent some time getting him as acclimated as I could.

Usually JJ is not a very affectionate horse, nor does he seek comfort in his human. This day, however, he absolutely would not leave my side and wouldn’t let me get more than a few feet away before he would find me and stick to my shoulder like glue. I thought it was so endearing how uncharacteristically insecure he was, and it made me feel really good that he looked to me for (temporary) reassurance.

JJ soon realized that while he might not appreciate the water, the sand was perfect for rolling and JJ *LOVES* to roll. He was overjoyed to have fun wallowing around in the new, scratchy substance, and was much happier afterwards.

With a quick grooming session, my friends and I tacked up to go explore. We broke up into groups and started wandering the shore. The tide was high, so space was limited, but we found a nice section and had a few fun gallops. We jumped a few trees/logs, and just enjoyed being out on the beautiful beach – it was definitely an experience that not many are fortunate enough to experience!

One of our group’s teenagers was on a horse that was relatively new to our farm, and the mare was having confidence issues and kept trying to ditch her rider in the sand so she could bolt back to the trailer. I simply cannot put into words how incredibly proud I was of this young rider for having the patience, strength, and confidence of her own to help guide the mare through her insecurities. By the end of the day, the two of them were galloping around like old pros. It was really fun to watch them both grow, individually and as a pair, in a matter of mere minutes.

As the sun began to head towards the horizon, we called it quits, loaded up, and headed back to Middleton Riding Academy so we could feed and put our babies up for the night. 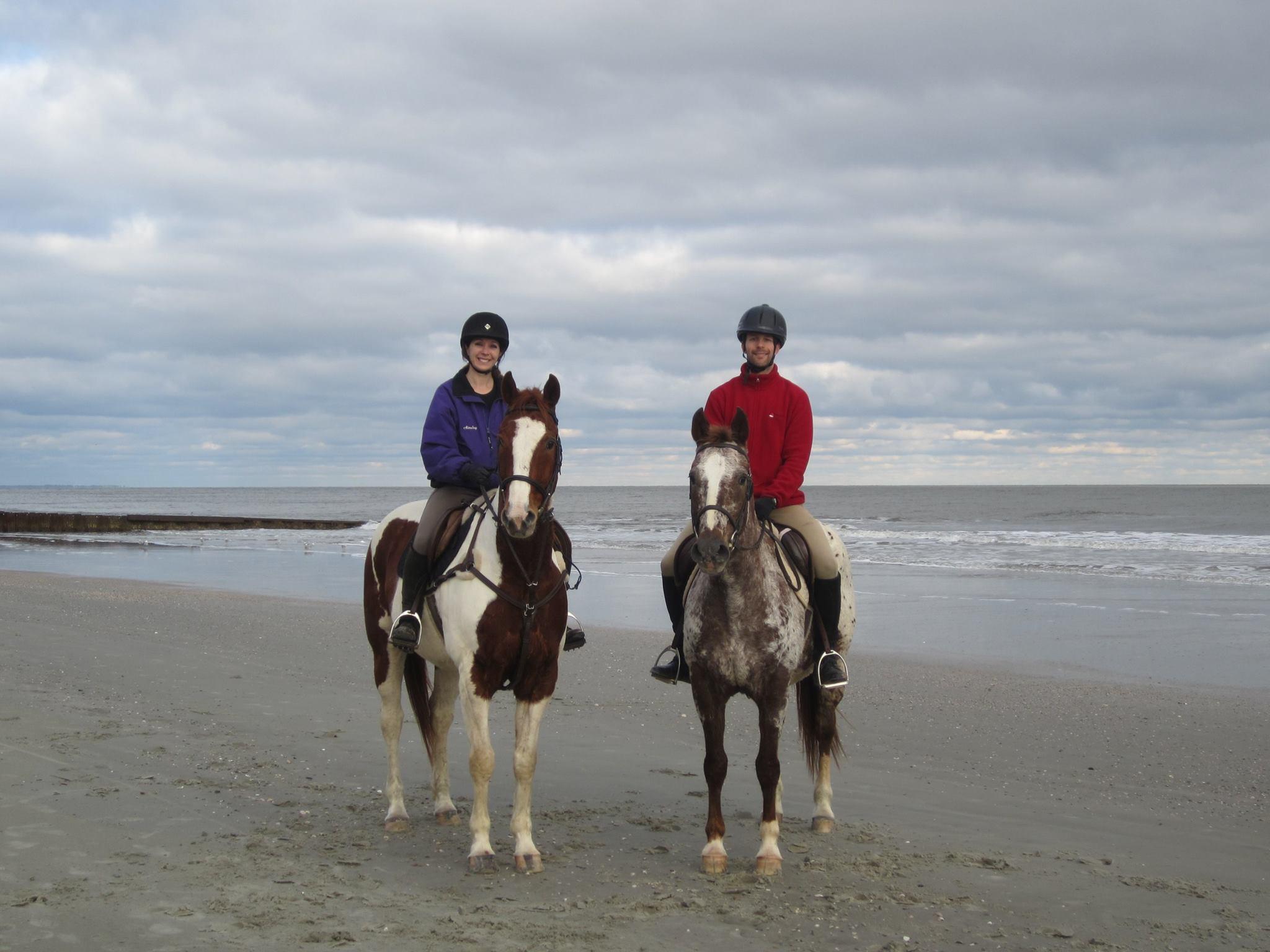 Despite his initial insecurities, JJ put his game face on when it was time to ride – and so did Classy, ridden by my husband, Erik! Photo by Halliea Milner/Go With It Farm

Even if your horse is big and brave when you go through the water on the cross country course, he might be a big baby when faced with an entire ocean. And that’s actually kind of cute.