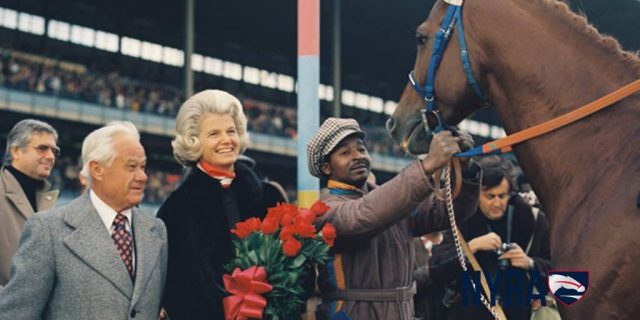 The owner of Secretariat and advocate for horse racing and the Thoroughbred passed away on Saturday, September 16, 2017.

Helen “Penny” Chenery, owner of the incomparable Secretariat and champion for Thoroughbreds and horse racing, passed away on Saturday, September 16, 2017 due to complications from stroke. She was 95 years old.

Penny Chenery’s name is forever intertwined with that of Secretariat, arguably one of the greatest racehorses of his era. Ms. Chenery — Penny Tweedy at the time — took over her father’s Meadow Stable in 1967, having served on the board of the stable but never taking an active management role. The learning curve was steep but Penny persisted, learning as much as she could from racing publications and the advice of the farm’s managers as well as other well-known farms of the age. Despite her efforts, the farm was losing money and she struggled to keep her father’s legacy alive.

A colt named Riva Ridge helped bring some glory back to Meadow Stable in 1971 when he won several major juvenile stakes and earned the title of Two-Year-Old of the Year; the following spring, the colt won the 1972 Kentucky Derby. The same year, another star juvenile of Meadow Stable named Secretariat roared onto the track, establishing himself as the best two-year-old in Riva Ridge’s footsteps.

To save Meadow Stable, Ms. Chenery syndicated the horse for $6 million, a staggering sum for the time. She retained majority ownership to ensure that she could still control the horse’s racing career as a three-year-old before he would retire at the end of the year. In 1973, Secretariat firmly established himself as one of the greatest racehorses of the age as he smashed the Triple Crown in record-setting style, making himself a household name with true celebrity status.

Later in life, Penny stated that it was trainer Lucien Laurin that called the shots in the colt’s racing career; she served as Secretariat’s spokeswoman. It was this role that not only brought Penny Chenery into the limelight, but the emerging role of women as owners in the racing world — traditionally a boys’ club.

Ms. Chenery used her role as a spokeswoman to become a leader: she served as the first female president of the Thoroughbred Owners and Breeders Association from 1976 to 1984. In 1976, Penny joined the Executive Committee of the American Horse Council. In 1983, Penny, alongside other prominent female owners Martha F. Gerry and Allaire du Pont, was admitted as a member of The Jockey Club — the first women in the club’s history. She helped found the Thoroughbred Retirement Foundation, believing strongly in the idea of aftercare for retiring racehorses.

Arlington Park established an annual Penny Chenery Distinguished Woman in Racing Award in 2003 in her honor; Penny created the Secretariat Vox Populi Award to honor racing’s most popular horse annually. She received the Eclipse Award of Merit in 2006 for her contributions to the racing industry.

Penny Chenery’s leadership and advocacy for the Thoroughbred is her greatest legacy. The racing world continues to mourn her loss:

The world is a little less brighter…we're heartbroken over the passing of the beloved, Penny Chenery. From Secretariat…

Penny Chenery, pioneer, dreamer, and beloved person. We will miss her, always.

Deepest condolences to the family of Ms. Penny Chenery. A great lady and one of a kind. We thank you for your…

All of us at Claiborne Farm are saddened by the loss of Penny Chenery. Her determination, passion and love of horses…