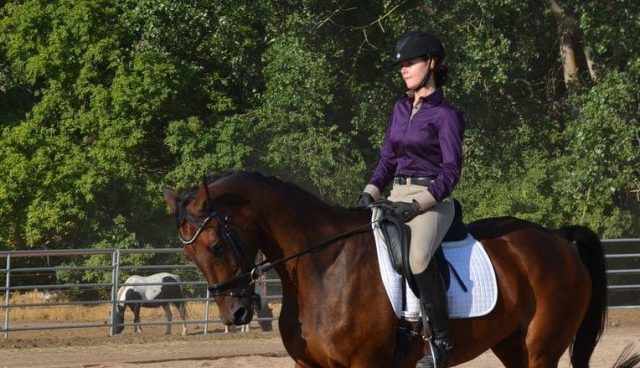 I’m a sucker for a great button-down western shirt. I’ve been a jack of all trades my entire life, riding in All-Around Mustang contests, competing in eventing, and showing at the State Fair in any number of disciplines, and I’ll wear my western shirts for as much of it as is legally allowed. They’re just what I feel most comfortable in.

But often times, I’m stuck between a rock and hard place because I LOVE the personality of my western shirts, but I sometimes wish they were just a little more professional-looking, better made, or best of all, made in America, where they’re actually worn the most.

All these things are precisely what drew me to the CR Ranchwear shirts, which are making huge waves in the western show world. They’re classy, almost obsessively well-made, provide an amazing fit and silhouette, and they are made to last. My kind of shirt. I chose a stunning deep purple blouse with beige houndstooth accents that I thought would pair nicely with either jeans and a straw hat or beige breeches.  It arrived quickly, and when I took it out of the packaging, a few things immediately grabbed my attention:

I tried the shirt on and was really pleased with the length — I have a pretty average torso, but I still find my usual tuck-in shirts just won’t stay tucked. This had plenty of extra length to keep those tails down in your britches where they belong.

It was very flattering to my figure. Slimming at the waist, generous in the chest, absolutely perfect shoulder width, and really generous in the arms so I never have to worry about my cuffs ending up at my elbow. Speaking of the cuffs, they are magnificently sturdy and expensive-looking. Buttoned down or up, they looked very professional, and the choice of combining the houndstooth and violet was simply genius. I never would have imagined up such a combo myself, but it was so darling in person. And again, the cuff buttons were super snug.

I took a decent ride in it on a charming 97-degree August day, and it took the beating like a pro. Was it the most breathable thing I’ve ever worn on a horse? No. But the cotton was definitely doing its job of wicking away moisture effectively and it looked great at the end of a long ride.

Then I took it home, tossed it in the washing machine with all my other dark gentle stuff and tumbled it on low air, and it looked BRAND NEW. Low maintenance luxury  is definitely my cup of tea. I decided to have a junior dressage rider put it to the test under the grueling sun and pressure of training for regional championships, and not only did it hold up great in appearance and performance throughout her lesson, but both she and her trainer loved the shirt.

“I would absolutely show at unrated shows or upper level clinics in one of those shirts,” said trainer Sydni Nusink. “It’s a great way to stand out and still look professional.”

My model Ellie said she’s fantasized about dipping her toe in queening, and now she’d have a shirt she could wear at an unrated show just as well as a queening event. In the hunter/jumper ring, a bold button-down blouse is completely acceptable attire for shows or classes that call for “Standard Attire.” (You can read more about these rules here.) It’s a great way to switch things up from the boring old polo and show off some personal style. CR Ranchwear has long term plans to break into the English market with choker shirts, and when they do, we’ll be sure to let you know!

They have numerous great options with an English flair on their site; I particularly liked these styles for the English rings, but I’d also love wearing them casually or for a western event any day:

And their more traditional western shirts with a true Texas twist? Get. Out. Of. Town. They are rad.

Sizing: It’s very important to know they run big, and they say as much on their site. I’m a medium/large generally, and they recommended I pop down to the small, which I did. I carry a little weight at the waist, (is it still considered baby weight if my baby is a 2-year-old? Let’s pretend it does) which meant I probably would have done alright with the medium, but the model we used for these photos is a dependable small, and she could have definitely done with the XS.

Investment: These shirts are not your average show blouse. They’re made to last, made at a local Texas factory by valued employees, and made out of exceptional material. That puts the price point at between $169 – $189. They’re expensive, to be sure, but they’ll outlast any other western shirt on the market practically by dog years, so it really is an investment in something you love. Customer Service: I’ve never bought from a nicer company. They’re a small, family-owned business that started making shirts to fill a hole in the western market for people who “are tired of boxy plaid shirts” as the owner, Rhea Scott Follett, put it to me when we spoke. As it happens, they might also fill a hole in the English market for people tired of generic white polo shirts!

You can learn more about CR Ranchwear at their website.

Many thanks to Ellie Blackwelder for letting me invade her Regionals prep and Prestige Dressage for being the perfect backdrop for photos!