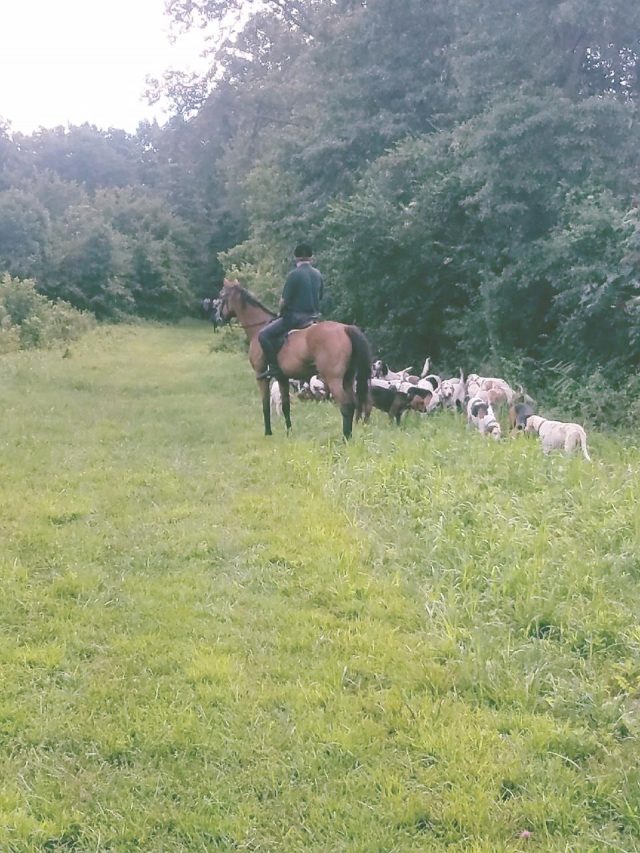 There is a reason I like to ride in the arena: I am a bit of a chicken. Sure, I like to go on a nice leisurely trail ride now and then, but when a friend joked that my OTTB Joey might make a nice eventer I laughed and laughed and laughed — mostly because there is no way I would make it on the cross country field. Don’t get me wrong, I have mad respect for eventers, fox hunters, endurance riders, and anyone else who is brave enough to challenge Mother Nature at a full-on gallop, but I also think there is a certain inherited level of “insanity” that comes with those sports.

That all being said, when a friend asked me to go with her on a “hound walk” with the local fox hunting group I was shocked for many reasons when out of my mouth came the word yes. I was nervous, so much so that the day before I was actually considering backing out. With a horse who is currently out of work, I was going to be riding a strange horse across the country side tackling obstacles I may not be able to go around and most likely at a full speed ahead for the majority of the time. What in the heck was I thinking?

When I relayed these concerns to the great Horse Show Husband Wayne, he agreed it sounded a bit crazy, but was more interested in the hunting part rather than the riding part.

“Where do you keep a gun on that saddle?”

“There are no foxes in this area.”

“Sounds a bit dangerous to have horses and dogs and riders with guns running around in the woods, doesn’t it?”

And my all time favorite, as he looked upon one of many fox hunting pictures hung around our living room: “Why is that guy wearing red? Shouldn’t he be in like camo or something?” 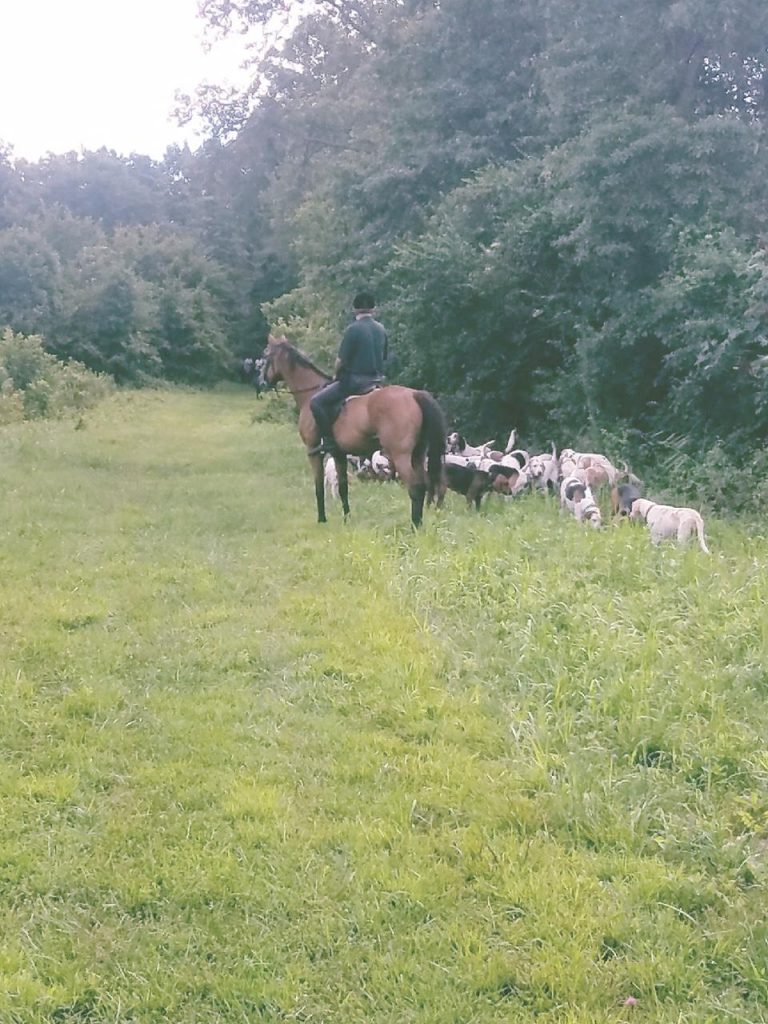 A huntsman and the hounds. Photo taken by Jamie McDowell at her first official fox hunt experience in 2016.

Honestly, I couldn’t answer many of his questions. Aside from hoarding vintage prints of fox hunting to hang around our living room, I knew very little regarding the sport that founded the one I currently compete in. We got back on the subject of my general fear of dying while crossing a rather large ditch during the hunt and Wayne convinced me that I should, “do it for your readers, Meagan.”

Well… he got me there.

A hound walk is like a mini fox hunt or a “trial run.” It allows the hunt club to work the hounds prior to hunting season and allow the newer hounds to acclimate to the horn and the call of the whips.

Whew, so much fox hunting terminology in one sentence.

As I tacked up my mount for the day, an adorable bay Quarter Horse gelding named Pretty Ricky, a horse trailer passed us with twenty something hound dogs all fighting to stick their head out of the tack room window. I couldn’t help but squeal, “ahhhh those dogs are adorable!” 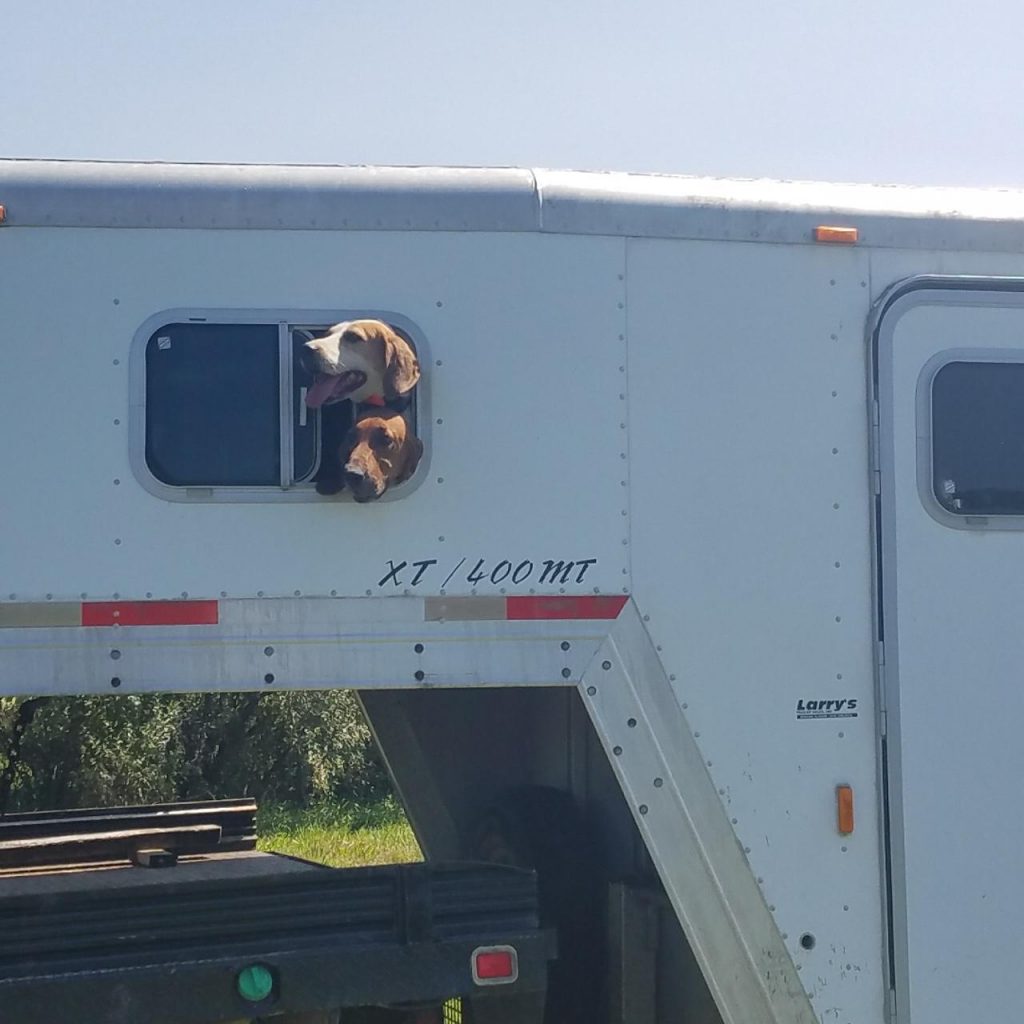 “Meagan!” my friend Christa whispered under her breath, “don’t call them dogs! They are hounds!”

There is quite a bit of history and etiquette that goes along with fox hunting, all of which I got a crash course in on that day. For instance, seeing as we were just going on a “casual” hound walk that day there was no dress code, but in real fox hunting specific attire and tack is required. 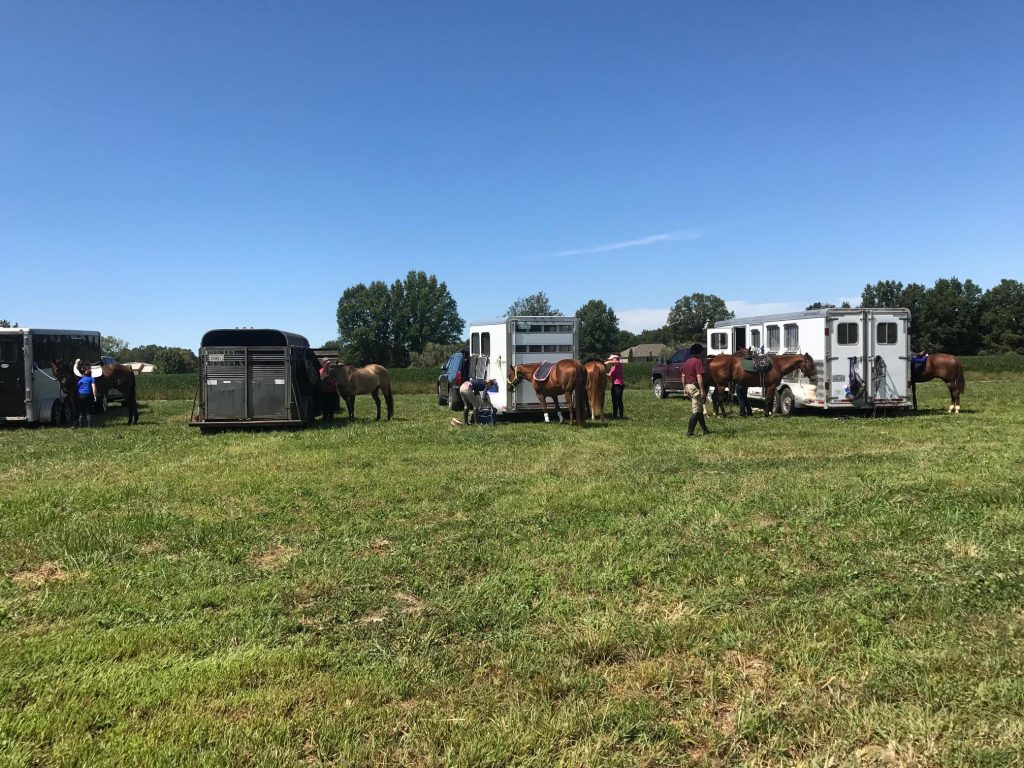 Part of the group of riders I could potentially embarrass myself in front of for the day. Photo by Meagan DeLisle

Taking note of the importance of the word hounds (I would continue to say dogs all day long and get glared at by friends and strangers), I snapped on my helmet and started acclimating myself to Ricky. Thankfully, he was a saint. He knew how to neck rein and wasn’t interested in anything that was going on. I knew we were going to get along.

Off to the Hunt!

We split up into two groups: first field who would walk, trot, canter and jump, and second field, the walk trot group. I liked the sound of the second field, but all of my friends were hopping into the first field group so onward I went. To my surprise, the day started off really well. The weather was beautiful and we did a lot of walking, broken up by a bit of trotting now and then. This I could handle. 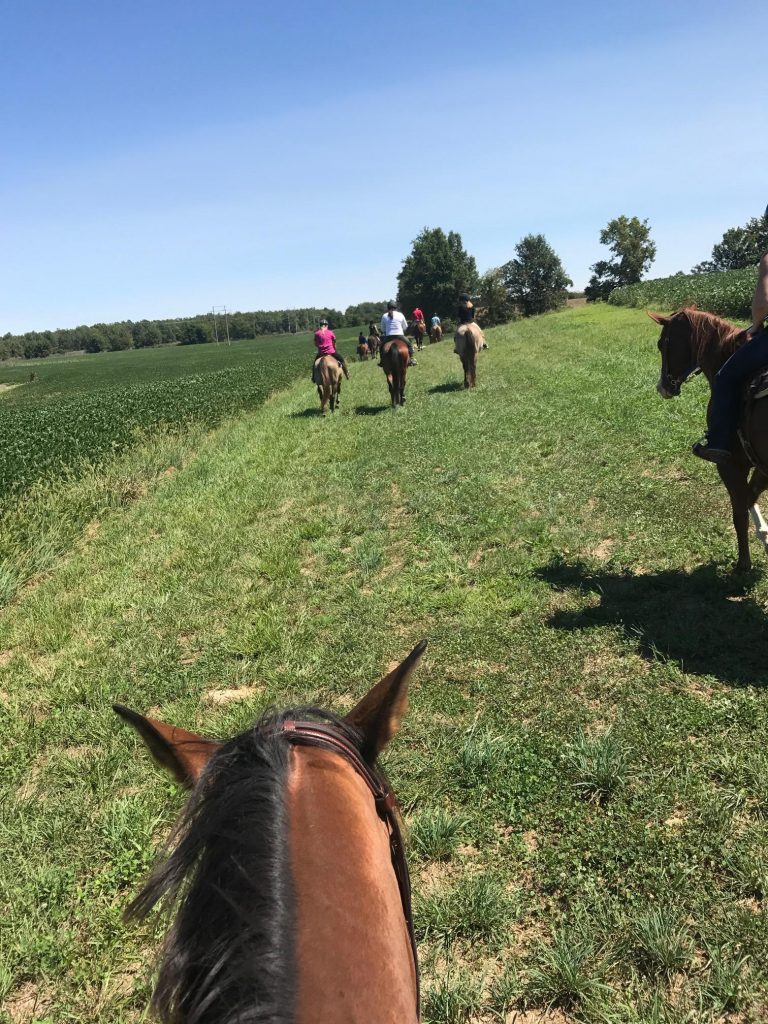 The calm before the storm. Photo by Meagan DeLisle

And then came the first big ditch.

I am not exaggerating when I say “big ditch” either. It was entirely too wide to jump, but seemed almost too steep to navigate. When Ricky and I approached it he considered jumping it from a dead stop to which I found myself praying that if I were meant to die today that it be swift. Thankfully, he surefootedly made his way down and up the bank and I could take a sigh of relief.

My friends Christa and Jamie had gone before me, leaving Brittany (who was riding a green three year old red-headed mare) and Meghan behind me. Meghan’s mount Beau was also considering jumping the ditch (which he would continue to do all day and give us plenty to giggle about), but she managed to convince him to scale the ditch like everyone else. When we were all across, we looked up and had a bit of an “oh crap” moment.

The group had galloped on. 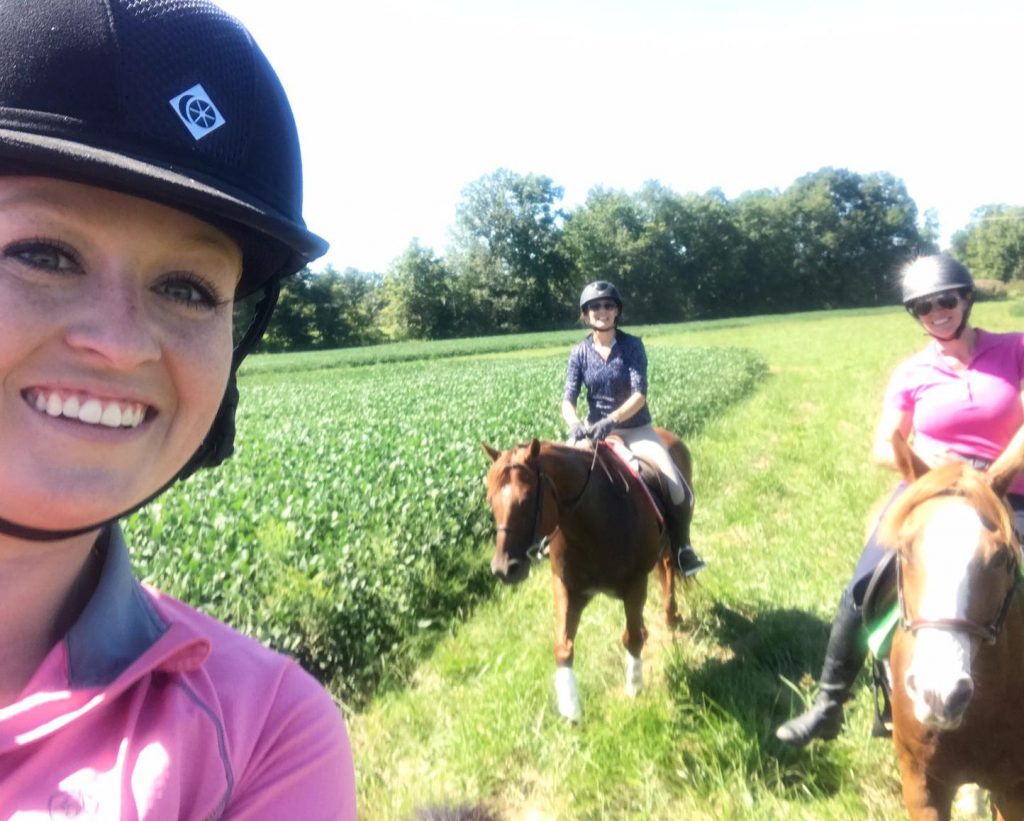 Myself, Jamie on Little Man, and Meghan on Beau. Somehow we found ourselves left behind and no, it wasn’t because we were too busy taking selfies… I think…
Photo by Meagan DeLisle

Christa, being the most seasoned of all of us, led the way at a full sprint on her hot little stud horse Doc. Ricky quite enjoyed going fast and I found myself with a bit of a grin as well. That is, until we rounded the corner and we were all at a dead stop… apply emergency brakes now! We were at a crossing and had no clue if we should go right or left.

Thankfully, our field leader found us and led us on our way, again at a gallop. Galloping through the fields was fun; galloping through the woods was a bit more intimidating. Small logs and fences began to pop up and Christa informed me that Ricky was a good jumper, if he was following someone. So I tailed behind Jamie and her mount Little Man and popped over our first fence of the day.

The log itself was maybe 18”; Ricky, however, wanted to show off his gusto and jumped it with perfect form as if it was a 3’ oxer. Insert more girly giggles here. I officially loved this horse. 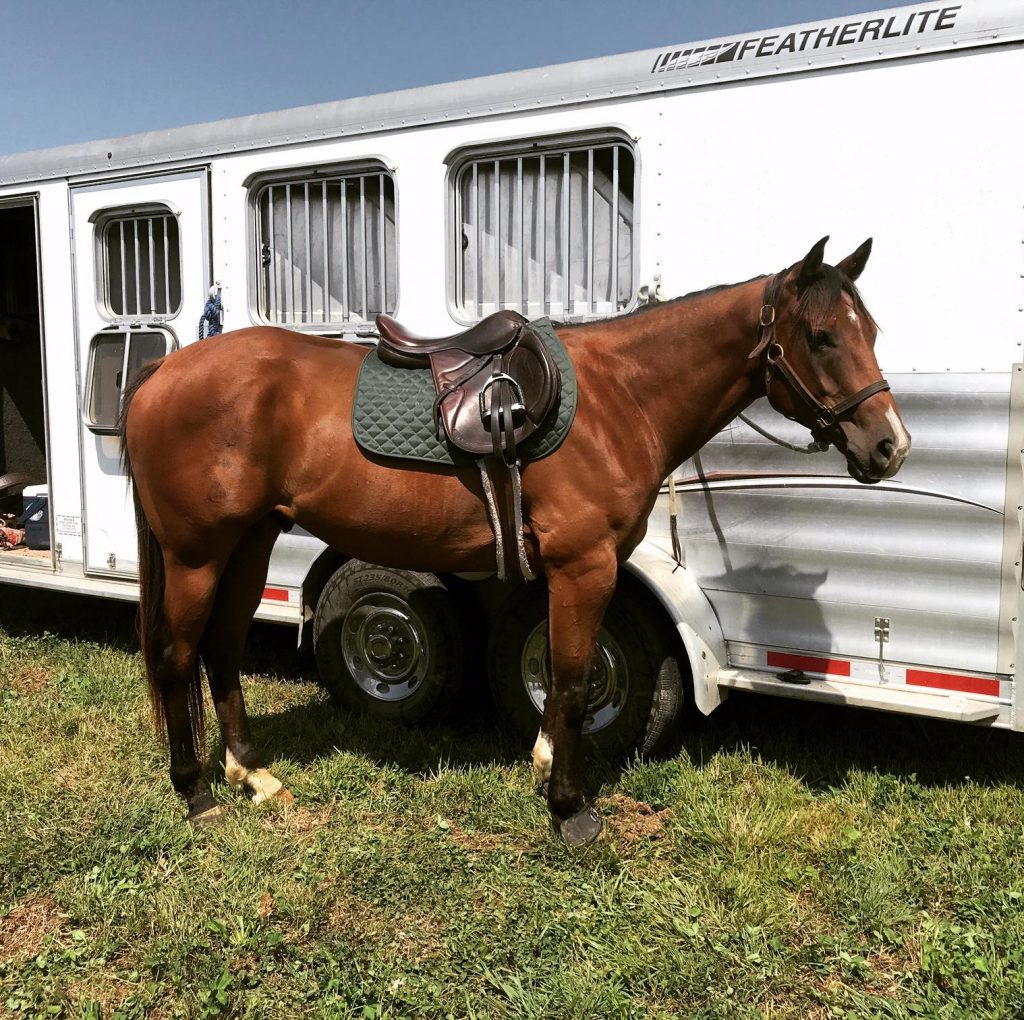 I have every intention on finding a way to steal this horse. The legendary Pretty Ricky. Photo by Meagan DeLisle

We continued on for another hour and a half, running, walking, trotting, stopping. The hounds would bay in the distance and the sound of the whips (not real whips, this is a term for the riders who help rally the dogs — er, hounds — during the hunt) calling to them helped lead our way. The hounds were fearless, running in and out of the woods with pure looks of glee on their faces. They would pop out of nowhere right in front of a moving horse. Unfortunately, a younger hound did get kicked during the ride but the huntsmen and women were quick on their feet to assess the situation before moving on. Each hound had a name, each hound had a story, and it was obvious how much the group cherished their pack.

In the last thirty minutes of the ride, I was pretty sure my knees had given out and my legs were going to fall out from underneath me when we finally dismounted. We rode hard. Note to self — new exercise regimen shall include fox hunting.

At this point, all of the horses had caught their second wind — including my steady boy Ricky. As our group cantered off for the last time, many of the riders allowed their horses to open up and have at it — so I decided to have a bit of fun as well. A little kiss was all Ricky needed, I felt like we were in warp speed. I cant explain to you that feeling, absolute freedom mixed with a little bit of terror. It was pretty awesome. 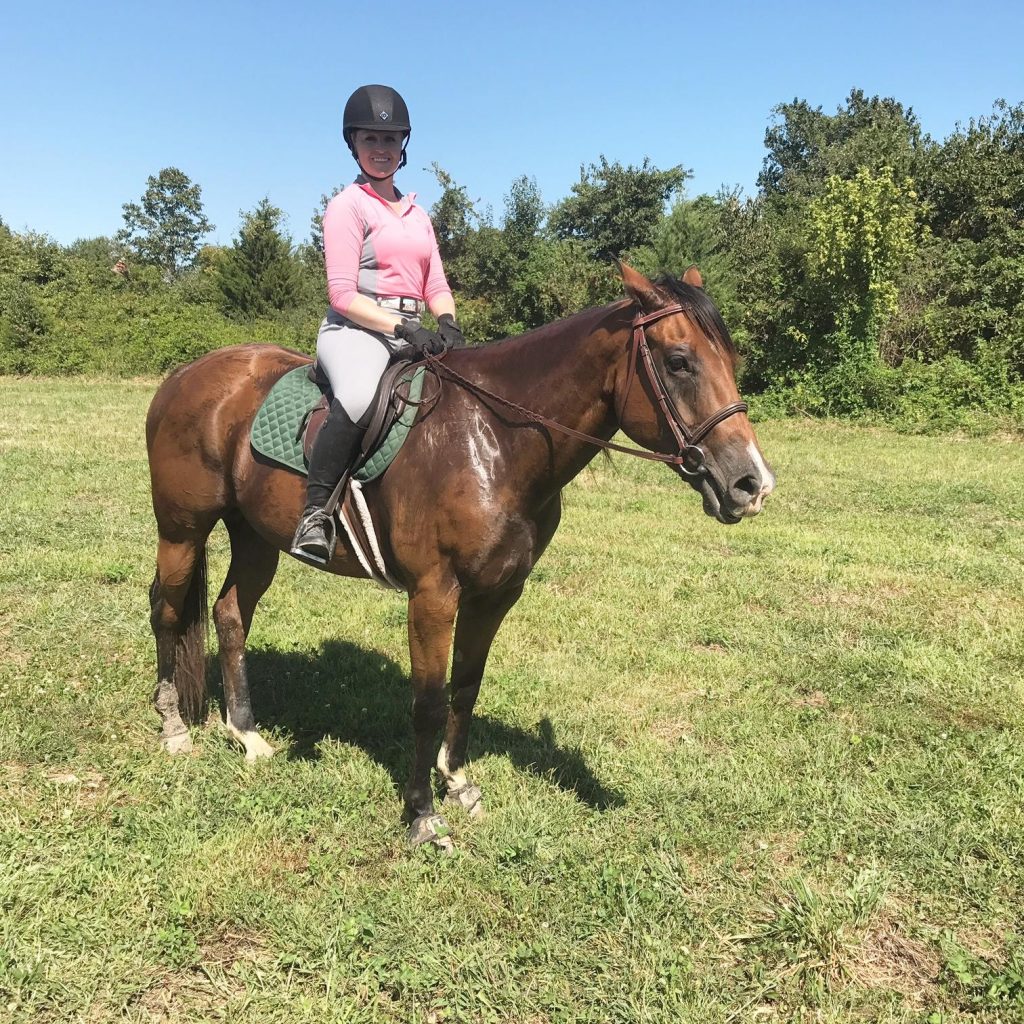 Ricky and myself post-ride. As you can tell, he really wasn’t feeling the photo moment one bit. Photo by Jamie McDowell

Of course, arriving back at the trailers was pretty awesome too. I almost fell off of my mount because my legs were so sore, but it was one of those pains that you wouldn’t trade anything in the world for. I had survived. I had stayed on. I had fox hunted! — well… kind of.