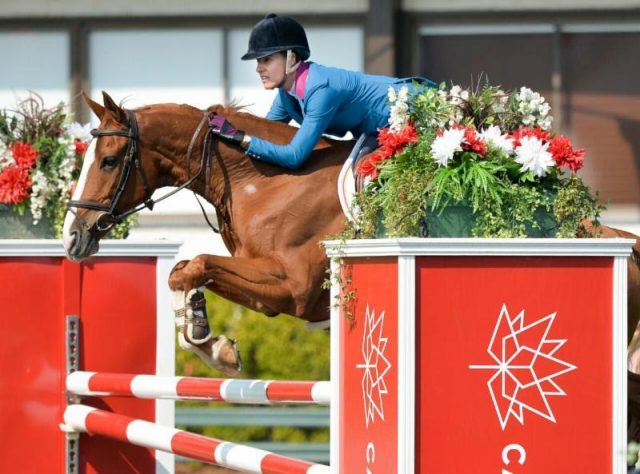 With horses with names like “Fit For Fun” and “Winningmood,” how can you not love this lady? This mare! We simply can’t get enough of Fit For Fun. This ferocious 13-year-old Hanoverian pocket rocket and her Portuguese pilot wailed on the competition at their very first appearance at Spruce Meadows, besting 63 combinations in the opening class, the TELUS Cup.

It was a last minute decision to take Fit For Fun in the TELUS Cup: The top three placers in the 1.50m event would automatically advance to the Grand Prix, and Luciana had a good feeling about the day. She played strategically and her gamble paid off.

“I woke up yesterday and decided I would go with a different plan than I first thought. I originally thought I would take Fit For Fun into the 1.60m competition, but my goal was to qualify for the Grand Prix and get the pressure off for the week.” said Luciana. “I had a great feeling about my decision and luckily it seems my intuition was right.”

Just fractions behind her in the order — to the delight of the crowd — was Canadian Eric Lamaze aboard Chacco Kid. Egypt’s Sameh El Dahan clinched the third qualifying spot aboard WKD Diva. The top three were all within .4 seconds of each other in the jump-off.

Zazou Hoffman was the highest placed American in the opener, taking ninth aboard Samson II.

As luck (and strategy / hard work / talent) would have it, Luciana also took third in the 1.60m class , the Akita Drilling Cup aboard her other magical mystery mount, Winningmood, who still manages to fly around like a mad machine at 18 years old.

We can’t wait to see what else Luciana has up her sleeve for the week in Spruce Meadows, but now we know she’s got a good feeling about it! “My victory began already yesterday when I arrived and truly fell in love with this place,” Luciana said after her win, and we’re ready and waiting to see where true love takes her.

Brought to you by JumperNation.com, the informed, cheeky friend of the dedicated fan and invaluable resource and voice of the hardworking competitor.