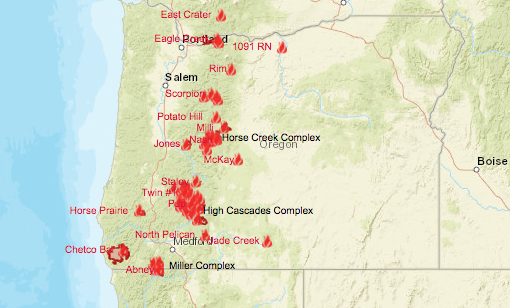 As wildfires rage across Oregon and Montana, among other states, thousands are evacuating with horses in tow. We’ve got details on the current state of the fires as well as tips for ensuring your horse’s safety.

I woke up this morning to the voice of Damon Simmons, Oregon Fire Marshal, on my radio describing the current conditions of the Eagle Creek fire which is now over 30,000 acres in size and zero percent contained. Simmons had a comforting tone in his voice, trying to reassure Oregonians who feel so helpless as homes, farms and our most prized natural sites are threatened by the encroaching flames.

Currently 340,000 acres are burning in Oregon, with the Chetco Bar Fire in Southern Oregon, the Milli Fire in Central Oregon, the Eagle Creek/India Creek tearing through the Columbia River Gorge, and the numerous smaller fires in between creating a smoldering meridian down the length of the state. Local and federal personnel are fighting the ever-growing blaze with all they’ve got, but despite massive efforts the fires aren’t predicted to be contained until late September or early October.  Record high temperatures and the presence of large amounts of fuel on the forest floor are creating serious containment challenges.

The omnipresent smoke is a constant reminder that my state is on fire, though I am one of the lucky ones. Aside from decreased air quality, my horses and I are out of the path of danger, but for my friends in other parts of the state, the danger is very real. So far nearly 5000 people have been evacuated from their homes, and likely several more will need to be evacuated in days to come. Residents needing evacuation information dial 211 or visit 211info.org

So if you’re like me and are sick of feeling helpless in the face of this natural catastrophe, here are some ways you can help.

To donate to evacuees in Oregon, please consider donating to the Red Cross which is operating many shelters across the state.

To help with livestock/equine evacuations, please consider donating to:

Montana’s wildfires have been raging for much of the summer, fueled by dry conditions and high winds. Some of the biggest fires include:

This is not an exhaustive list but should serve as an indicator of just how serious of a situation in Montana that firefighting personnel and residents are facing. Thousands of acres of forest as well as livestock grazing land has been lost with many reports stating that there will be no relief until snowfall.

To donate to help evacuees and victims of Montana fires, consider the following:

Due to the size of the state of Montana and the scale of the fires, equine-specific charities and fundraisers can be found at the community level.

Past wildfire seasons have devastated hundreds of thousands of acres across the American west but have been somewhat staggered, aiding in containment as well as relief efforts. This wildfire season is staggering in terms of the sheer acreage currently on fire and the widespread devastation across the west.

Hundreds of thousands of acres are burning in California, Idaho, Washington and Wyoming. InciWeb is the best source for updated news and maps as well as evacuation orders; if you are living in an area close to active fires monitor your local news sources as well for evacuation updates.

If you are living in a fire-prone region, don’t wait to be ready to evacuate. Take steps now to ensure that your truck and trailer are ready to go, including brakes, tires, lights and floorboards. Copies of your Coggins and health papers as well as photographs of your horses should be in the truck in a waterproof bag as well as at your home and barn. Plan multiple routes away from your barn if possible in the event that one or more routes are blocked or closed.

Stock your trailer with feed and water as well as spare fuel; you should have supply for a few days. Make sure your human and equine first aid kits are stocked and updated as well. Spare halters and leads are always a good idea.

Luggage tags or cattle ear tags should be affixed to each halter with the horse’s identification information as well as your own. If you are forced to evacuate quickly with no time to take your horses to safety, consider spray-painting your phone number or writing in permanent marker on your horse’s hooves. Horses turned loose with identification are likely to fare better than those left locked inside or in an enclosure.

If it’s possible, evacuate with your horses before it becomes mandatory to do so. More information on disaster preparedness can be found here.

If you reside in area affected by the smoke of nearby wildfires, be sure to monitor the air quality index. In the case of poor air quality, limit time spent outside, and in cases where time outside is unavoidable, do not physically exert yourself. While your horses may not be able to come inside, avoid activities that increase the rate of respiration.

Kristen Kovatch contributed to this report.