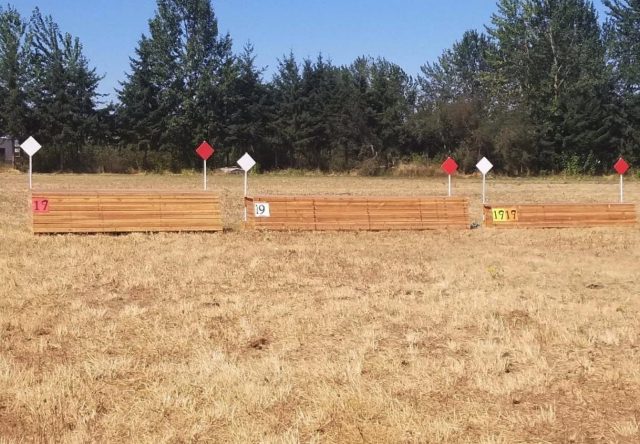 Back in the day, my Pony Club (shout out to all of my Groton Pony Club peeps!) had an “Adopt a Jump” program. In the spring, Pony Clubbers were assigned a  cross-country jump from our mounted meeting venue and it was our job to repair, repaint, embellish, etc. in preparation for the upcoming season. I always got assigned the coop jump, and every year I found myself in shock as to just how much work goes into making a simple, paneled A-frame safe and presentable. I spent hours replacing boards, sanding splinters and painting the jump with protective stain.

The Groton Pony Club’s Adopt A Jump program is the extent of my cross-country jump building experience, but it’s enough to know that putting together a cross-country course is no small undertaking. So when I showed up to volunteer at the Oregon Horse Center’s eventing derby and saw the course that was no more than a twinkle in organizers’ eyes prior to June, I was shocked to find so many well-constructed elements represented, accommodating riders from the grasshopper to the novice/training level.

Just a few of the jumps on the OHC cross-country course. Photos by Biz Stamm

Part of my shock in the speed of the OHC eventing course construction was fueled by knowledge of the types of activities that typically occur at the Horse Center. It is a common venue for breed shows, western performance shows and most famously known for the extreme mountain trail course which has produced many a viral video, but it’s not really known for hosting any kind of sport horse competitions.

I got a chance to sit down and speak with Major Defoe, the owner/founder of the OHC, about what it was like navigating this new territory and ask him how he had managed to make so much progress so quickly. He explained that “getting into something you don’t know a whole lot about will always be challenging, but I have great people working for me with the skills and knowledge to make it happen.”

Major has hired Annie Fike, who has many years of experience in both eventing and show jumping worlds, as the OHC Director of Eventing. Additionally OHC eventing has access to the very same talented builders and grounds crew that make the outrageously unreal extreme mountain trail course a reality. With a newly purchased excavator, who knows what kind of fun terrain modifications you might find on course in months to come!

While volunteering at the most recent OHC Eventing Derby, I manned my dressage ring steward post as Annie simultaneously monitored the warmup and ran and scored tests. I’m going to take it upon myself to bestow the title of multitasker-in-chief upon her. Somehow between all that running around, she found time to talk with me about OHC eventing. She expressed that her number one goal is to create a safe and inviting venue where people new to the sport of eventing can come try it out in a low pressure situation. In a place like Oregon with a blooming interest in the sport, such a venue is a welcome addition.

Currently OHC eventing is offering a type of event that’s become popular in Oregon due to the lack of full cross-country courses:  dressage cross (or DX). DX begins with a dressage phase followed by a jumping phase which combines elements from both stadium jumping and cross-country.

Drone footage of the DX test event.  Note: this was early in course construction and many more jumps have been built since.

In months to come, OHC eventing is looking forward to hosting its winter indoor eventing series, which will be set up through the multiple connected indoor arenas, and jumper nights. T here was also talk of offering an eventing equitation class to highlight the importance of a strong, effective jumping position which made my inner Denny Emerson jump for joy! While currently they are only offering schooling type events, Major told me that he sees no reason that they can’t try to host a recognized event in the years to come.

All horses and riders appeared to have a blast at the OHC DX event and I suspect many will be back for the next. I had so much fun just watching that I’m seriously considering taking my little dressage horse for a spin around the course! 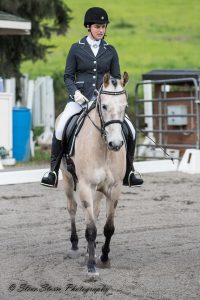