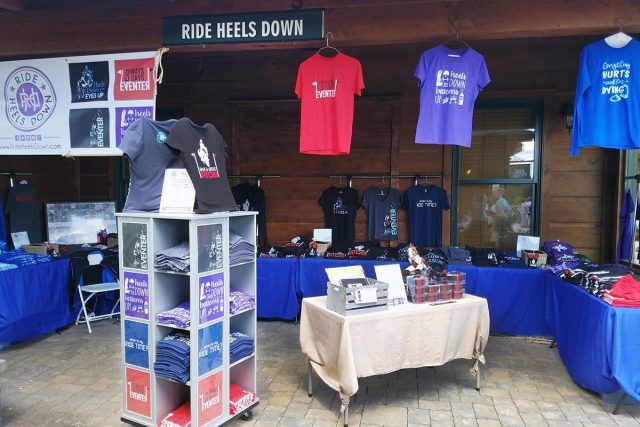 While Ainsley Jacobs’ original goal to attend the 2017 American Eventing Championships as a competitor didn’t pan out, she made an important discovery while attending as a vendor. 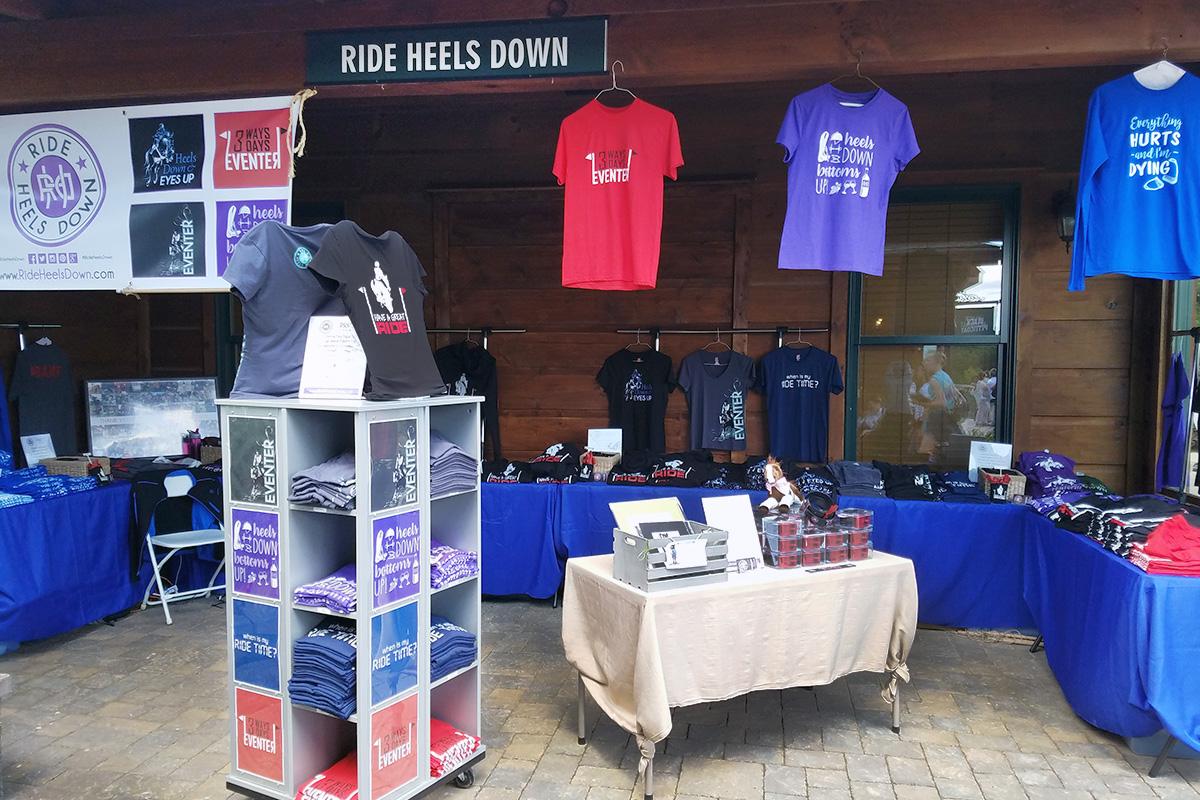 The booth came together surprisingly well, and the sign that USEA provided made me feel so legit! Photo by Ainsley Jacobs/Ride Heels Down

When JJ and I first started eventing together in 2014, I wasn’t sure where the partnership would take us. When it was announced that the 2016 United States Eventing Association’s American Eventing Championships would be held less than three hours away from me at the Tryon International Equestrian Center in North Carolina, though, I decided that it was my goal to compete there.

In February of 2016, I made our partnership “officially official” by buying JJ. My goal of getting to the AEC seemed easily obtainable as we received 1 of 2 necessary qualifying scores for the Beginner Novice division right off the bat at an event the next month.

Unfortunately, as so often happens with my eventing attempts, fate had other plans. On April 1st, JJ went lame. At first, the prognosis wasn’t too terrible and my vet believed he would recover in time for us to get the second qualifying score and make it to the big event in September. Things didn’t pan out that way, though, and JJ wasn’t cleared to get back to real life until May of 2017 – more on that in a future post.

Knowing I didn’t have enough time to get JJ fit enough to compete and magically qualify for the 2017 USEA AEC (at Tryon once again), I decided to go with “Plan B.” If I couldn’t event, I would go as a vendor instead. It disappointing to (temporarily) give up on a dream I had worked so hard for, but it was also exciting knowing I’d still be able to go, and that I would be able to cheer on my friends.

I contacted Kate Lokey at the USEA and asked way too many questions, but she was wonderfully accommodating and was able to get my little eventing apparel business, Ride Heels Down, set up as a prize level event sponsor so that I could afford to purchase booth space, too.

I had never been to Tryon before, so I wasn’t familiar with the vendor layout or setup… when it came time for me and my (incredibly patient and tolerant) husband, Erik, to help load up for the event, I basically threw a pile of “I might need this, but I’m not sure why” stuff on the packing list and decided I would just figure it out when I got there. Prior planning prevents poor performance, right?

We arrived at Tryon on Tuesday afternoon and I was pleasantly surprised by how welcoming the USEA staff was. They had volunteers and golf carts ready and waiting to help us unload our giant van full of apparel bins and boxes, and happily shuttled everything to my vendor area. The space itself was really nice, the booth came together surprisingly well, and I was excited to be able to spend a week at the gorgeous facility – despite the fact that I wasn’t riding.

Over the course of five days, my initial dismay at not being able to compete was replaced by tremendous gratitude. I had a lot of friends who had qualified for AEC and were riding at the event, and the fact that each and every one stopped by to say hello and chat meant the absolute world to me. I know how stressful it is getting ready to ride, and how scare down time can be, so the fact that everyone took time out of their already busy day to visit me was beyond amazing.

Several of my friends also took it upon themselves to promote Ride Heels Down by hanging banners outside their stalls and helping spread the word. I was so blown away by how motivated they were to show their support of me and my business, and I have to give a huge, heartfelt thank you to Rylee Gailey of Peachstone Eventing, and Ava Vojnovic and Taleen Hanna of Free Form Farm. You ladies are the absolute best ever and I love you all! (Shameless plug: want a custom RHD banner with your name and colors? Get one here!) 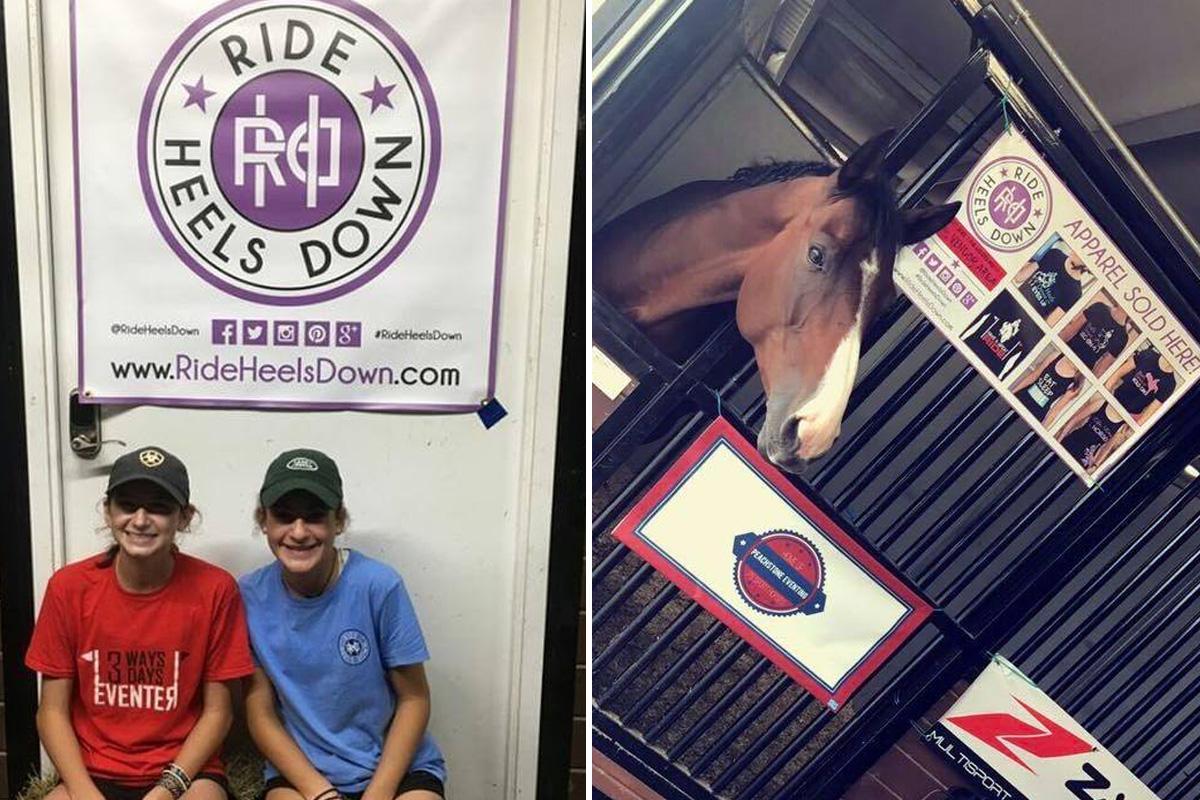 In addition to being able to watch my friends ride and cheer them on along the way, I also met a ton of new friends – and that’s something I really enjoy! I believe that strangers are just friends you haven’t met yet, so I have a blast getting to know new people and chatting about their horses. It’s so cool to see people that don’t know me get excited about my brand, and want to support me as an eventer-turned-entrepreneur without any personal relationship or obligation. That in itself is a feeling beyond words.

Another thing that really struck me and hit me right in the feels was the fact that I realized somehow, I had accidentally become a bit of a role model to young girls in the eventing community. I had several actually express the sentiment outright, and some that I realized after the fact had come by to talk with me because they thought I was the “cool girl with the cool business.” What?! Seriously?! Me? I’m a nobody! I’m barely a Novice level rider, and I’m certainly no big-shot professional badass rider.

I definitely don’t consider myself anyone special or worthy of that level of respect, but the revelation was forced upon me multiple times throughout the event that there are many young riders who look up to me and think it’s so cool that I have my own business. I had never really thought of myself that way before. I don’t have any kids of my own, so at first, the concept was admittedly strange, but I was simultaneously humbled by it.

Thanks to Ride Heels Down, I have the ability to show young girls that they should follow their dreams and not to be afraid of risk. They can be entrepreneurs, independent thinkers, innovators, and still have fun doing something they love. It’s both weird and wonderful to know that I could be inadvertently changing lives for the better. Even if I never make a dime of profit, it’ll all have been worth it to know that I was able to inspire. You can’t ever get to Rolex — er, the Kentucky 3-Day Event — without first learning to post the trot, and the same applies to any goal – you can’t get to the finish unless you make the effort to start.

Overall, I was really pleased with how the event went, from a logistical perspective as well as a business and a social one. I made a ton of new friends, met some really awesome people, helped build my little brand, and realized that I had the potential to be a positive influence for young riders. This was only my second-ever “major” event (aside from local events that I’ve vended at with a pop-up tent) and it was so rewarding to see how warmly people responded.

Was I bummed that I didn’t get to make my dream of competing at the USEA AEC a reality? Of course, I’d be lying if I said no. But, was I overwhelmingly happy with how incredibly well “Plan B” turned out instead? Yes, a thousand times yes, and I wouldn’t have traded it for the world.

If you don’t succeed with Plan A, try Plan B. If that doesn’t work, remember that you’ve still got 24 other perfectly good letters to plan with, too.