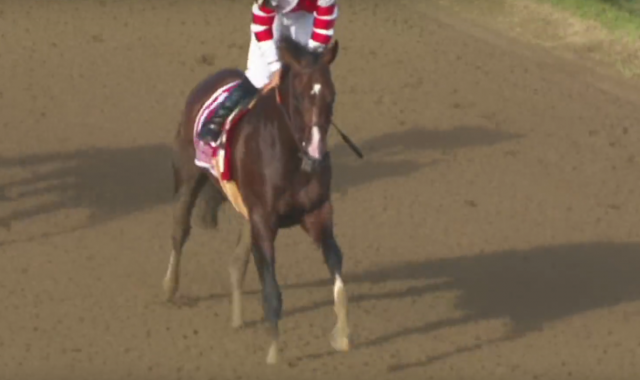 Owner Rick Porter at Fox Hill Farm announced the superstar filly’s retirement earlier today on his Facebook page. Take a look back at some of Songbird’s greatest triumphs!

Owner Rick Porter took to Fox Fill Farm’s Facebook page earlier today to announce his champion filly Songbird’s retirement from racing. Songbird, after finishing second to Forever Unbridled in Saturday’s running of the Personal Ensign, was sent to Rood and Riddle for a full evaluation, which turned up career-ending damage in her hind legs. The statement in full:

Over the Winter, Songbird had bone bruising and a specific area was very slow to heal. She was finally cleared to return, but the three races from Songbird this year weren’t what we expected from the bigger, stronger, and smarter Songbird. There were so many variables with her long layoff, shipping, tiring tracks, going 1 1/4 miles, and more, we were never sure which of the variables may explain what wasn’t quite Songbird.

After this past race, we thought something seemed off in her hind end, so we sent her to Rood & Riddle for an evaluation. Her lameness was readily apparent to Dr. Bramlage, and ultrasounds proved both hind suspensories were enlarged. Since suspensories are usually the result of something else amiss and he knew of her history, Dr. Bramlage shot a set of x-rays of the area of bone Songbird had issues with over the Winter. A distinct line on the bone was present. We followed up with a bone scan, and then an MRI.

Unfortunately, the results weren’t what we wanted to see. We have a situation where it’d be dangerous for Songbird to continue training, and Dr. Bramlage isn’t optimistic that the site will fully resolve even if given ample time.

So for this reason, we are retiring our lovely Songbird. She was an absolute joy to race, and we expect that she’ll be as wonderful a broodmare as she was a racehorse. She took us on an incredible and unforgettable journey. While we’re sad that we must retire her, we absolutely cannot risk having another Eight Belles kind of devastation and are ultimately happy that she is retiring in good health. May she soar to new heights in her future journey.

We’d like to publicly thank the incomparable Dr. Larry Bramlage, Dr. Katie Garrett, and the rest of the staff at Rood & Riddle. — RICK PORTER

We salute Mr. Porter for his decision to retire Songbird from racing, keeping the filly’s overall health as the utmost priority. We’ll be waiting eagerly to watch the champion’s career as a broodmare develop, for everything that Porter describes is true: Songbird took us all on an incredible journey, captivating the racing world as well as the lay public with several glorious seasons of racing. Here are three of our favorite performances from Songbird’s racing career:

Under a hand ride until Mike Smith just shows her the stick, Songbird romps wire to wire, running away with the victory at the end. This win solidified her Eclipse award for Champion Two-Year-Old Filly.

It was tough to choose which of Songbird’s Saratoga victories of 2016 deserved to make the list, but I felt that her incredible duel with Carina Mia, an impressive filly in her own right, definitely needed the spotlight. Songbird repels Carina Mia and then opens up a remarkable lead to win.

The Breeders’ Cup Distaff (2016)
While it might seem strange to include a defeat in a “Songbird’s Greatest Hits” collection, the sustained stretch battle with legendary champion Beholder which ultimately gave Beholder the win by the barest of noses in a photo finish showed Songbird’s incredible grit and her ability to hold her own with the very best. Many racing fans saw this duel as a symbolic passing of the torch, which unfortunately just wasn’t meant to be for Songbird as a four-year-old.

Songbird, thanks for the memories and we wish you a happy retirement.