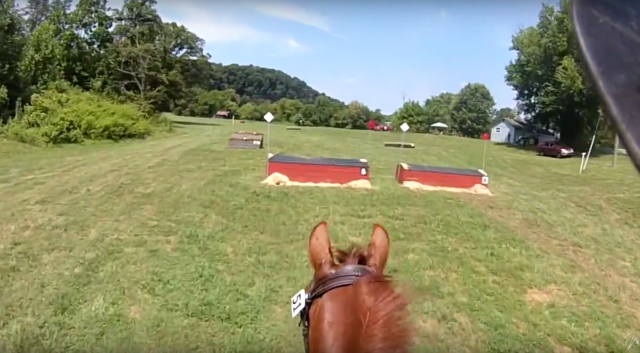 Save a horse, ride a mustang! Take a spin around the training level course at River Glen aboard Elisa Wallace’s mustang Rune.

Fan favorite eventer Elisa Wallace wears many hats: she’s not just an upper-level eventing rider, but she’s also dabbled in training mustangs. Working with the mustangs helps bring more attention to the need for safe, loving adoptive homes for the thousands of animals in long-term holding, and Elisa’s work as a mustang ambassador to the world of eventing has helped showcase the versatility of America’s wild horse.

One of her mustangs is the gelding Rune, a 14.3 chestnut adopted from the East Douglas/Piceance herd of Colorado in 2013. After placing a respectable 30th out of 190 entries in the Mustang Million competition, Elisa kept Rune in training with the 2017 goal of taking him to the Preliminary level by the fall.

Ride around with Rune and Elisa over the Training level cross country course at River Glen Horse Trials in Tennessee:

Rune starts out a little sticky with that unfortunate early run-out but as he gets a few fences under his belt you can see his confidence build. One thing we always appreciate with Elisa Wallace’s videos is that she doesn’t gloss over the “uglier” moments but shares things like run-outs to paint an accurate picture of the training life.