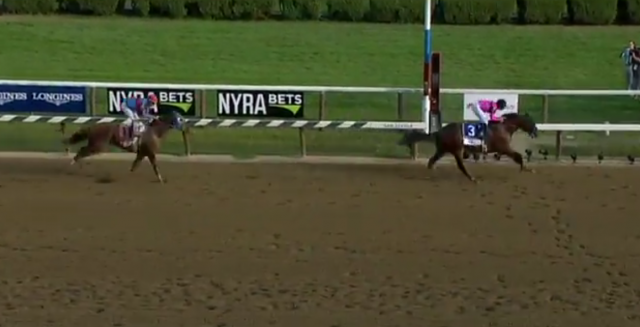 West Coast took a dominating wire-to-wire win in Saturday’s Travers Stakes, earning his first Grade I win and marking himself as a colt to watch into the autumn.

The holy trinity of Bob Baffert, Mike Smith and a California-based horse that wasn’t really on anyone’s radar yet has struck again in the Travers Stakes, which was won wire-to-wire on Saturday by Gary and Mary West’s colt West Coast.

It’s a well-trodden comparison at this point, but the circumstances this summer compared to last year are undeniably similar: Arrogate roared onto the scene in the summer of 2016 with his record-breaking Travers run, leaving the racing world simultaneously cheering his name and wondering where on earth that horse had been hiding all this time. West Coast was arguably much more accomplished than Arrogate going into the Travers, with a graded win already to his name, but his first Grade I win certainly put him firmly on the map in a three-year-old group without any clear star.

The stage couldn’t have been set any better: the winners of all three Triple Crown legs –Always Dreaming, Cloud Computing and Tapwrit — were meeting again for the first time as well as some of the supporting cast from the Triple Crown trail, including Girvin, McCraken, Irap and Gunnevera. With a sharp break right to the lead, however, West Coast would prove to be uncatchable despite challenge after challenge thrown his way at every stage of the race:

Gunnevera, a fan favorite from the Triple Crown trail, made an impressive move to sweep into second place but couldn’t catch West Coast. A stewards’ inquiry into possible interference in the stretch between Gunnevera and Irap resulted in no change, leaving Irap in third place.

There’s no definitive plan for where West Coast is headed next, but certainly the racing world is abuzz with speculation. Bob Baffert reported simply that the son of Flatter would ship back to California to rest and regroup. Baffert and Mike Smith have written themselves into the history books with these back-to-back Travers Stakes wins at Saratoga, becoming the first trainer and jockey combination to win two in a row.