What happens when a hunter/jumper princess dips a toe into the world of ranch riding? Come along for Meagan DeLisle’s discipline swap and find out!

What started out as a typical evening of wine and binge watching the McLain Ward clinic playbacks took a dramatic turn as I scrolled through Facebook trying to locate the link to the clinic stream. I was off in my own little world, scrolling along and stopping at anything pony related when I stumbled across a video that the American Quarter Horse Association shared of a judge’s commentary on a winning ranch riding round.

I am going to be honest, I didn’t stop because ranch riding caught my attention; I stopped because the girl was riding a GORGEOUS Palomino and I am a sucker for a cute yellow horse (we blondes gotta stick together). As I watched the round, however, I was taken back to my childhood dreams of working on a cattle ranch in Montana and living out the ultimate cowgirl lifestyle. Immediately, I was curious and began to hunt up as much information on ranch riding as I could find.

Ranch riding is a fairly new class offered at many breed shows such as the AQHA, American Paint Horse Association (APHA), and National Snaffle Bit Association (NSBA). It has elements of trail classes and reining classes; in fact, many successful ranch riding horses are dual purposed and can be seen in similar classes. Ultimately, the class was designed to showcase the skills that a workhorse would use every day on the ranch. Basic flatwork, working over obstacles, and working through gates (some classes even have pens with cattle that you can’t let escape as you work the gate) are typical in the ranch riding classes. Check out this awesome video below!

In typical impulsive Meagan fashion, after two hours of research and a few more glasses of wine I found myself reaching out to friends of mine who show on the AQHA circuit in hopes of finding a trainer nearby who competed in the ranch riding classes. Lo and behold, there was — and he was just 20 minutes away! Score. Time to give this whole western thing a try.

I think it is important to preface this whole journey with this — I actually used to ride western all the way through high school, but very informally. I never showed; I was taught by one of the roughest toughest cowboys that this earth has ever met, I became a leech to some friends of mine who rodeoed and dabbled in barrel racing and team roping, and I really hated carrying those heavy saddles so I mostly rode bareback and slowly slid off as my horses flew around the field. But I have done it before so I am not completely oblivious.

Step 1: Casually bring up to your husband that you’re adding more horsey stuff to your already full plate over dinner.

I have found the best way to soften a blow is to woo Wayne with food, so I made his favorite meal. When he walked in after a long day of working on the farm and saw a table full of goodies he stopped and said, “What have you done?”

Apparently it was time to rethink my plan…

So I tried to play innocent for a few minutes only to realize he completely saw through me and I just blurted it out. We talked about it for a while and I showed him entirely too many videos of ranch riding classes (to which he said something along the lines of “I like this better because these horses look like they’re doing something other than learning how to jump out of their fences”) and begged and pleaded only to have him tell me to go for it.

Followed up by this dandy: “can you do this with Joey?” I tried not to laugh because it isn’t his fault he doesn’t understand that no, my 17h OTTB show jumper cannot be turned into a ranch riding horse on the AQHA circuit. I tiptoed around my explanation waiting for the next bomb to go off and ding ding ding — we have a winner. “Does this mean we have to get ANOTHER horse?” he said as he immediately regretted already telling me I could call the trainer. 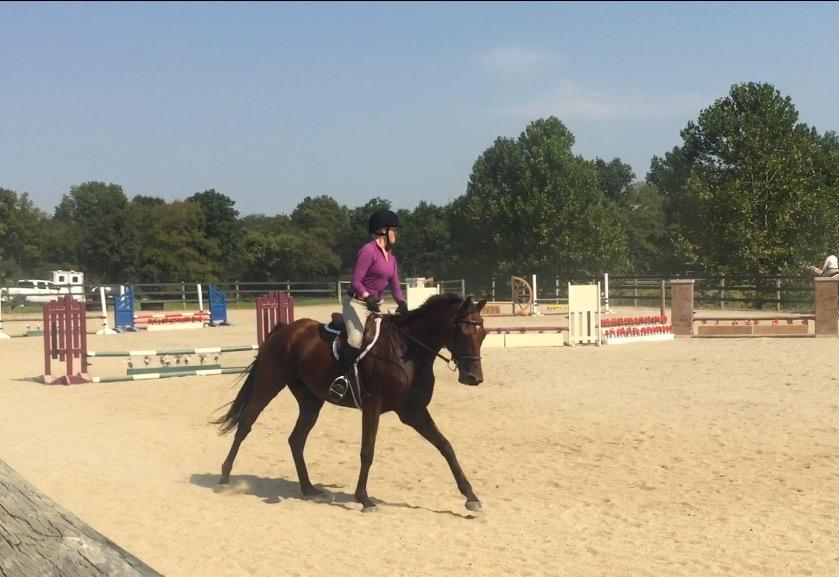 After much back and forth we agreed that I wouldn’t go out and buy a ranch riding horse until after I had spent quite a bit of time practicing and making sure I loved the sport (probably a good idea because I had already been scouring the internet in my semi-Moscato induced state looking for the prettiest pony I could find). Onto to the next step.

Step 2: Convince trainer to take on hopeless English rider and make her into a part time cowgirl.

So I called up the trainer to whom I was referred and gave him this long story about how I loved horses and my heart was dedicated to showjumping but that I was looking for a fun way to take the competitive edge off of my time with horses. I am sure after like five minutes in this guy was regretting answering his phone, but he patiently agreed with me with the sound of tolerance in his voice, so I think we are gonna get along OK.

Next thing I know, I am scheduled to go out in just two days to ride a few of his horses and get my first feel for ranch riding… yay! Impulsive Meagan wins again. But then it hit me….

I am assuming one does not wear breeches to ride western… although one of the coaches I visited with often in IHSA did say she often wears full seat breeches under her chaps to help her have the best seat. I settled on a pair of jeans and my AdultAmmyStrong sunshirt because a girl’s always gotta represent.

Step 3: Steer with one hand, adjust to the noise of spurs on concrete, and USE YOUR LEG.

I arrived at the facility and was immediately in awe of how fat and shiny and happy all of their horses were. The trainer Jon Barry and his daughter Marty Lantz have been in the AQHA business for over 30 years and obviously know how to turn out a horse nicely. When Marty pointed out my mount to me, a dashing black gelding named Speedy (note — he definitely did not live up to his name), and tossed me a brush I found myself wondering why I was even grooming him because his coat was immaculate.

Thankfully, I have known Marty for a while so she didn’t make fun of me as I struggled with the heavy Western tack and learning to steer with one hand. Seriously… I didn’t realize how hard it was going to be for me to adjust to neck reining and only having one hand on the reins. What does one do with the other hand?!? 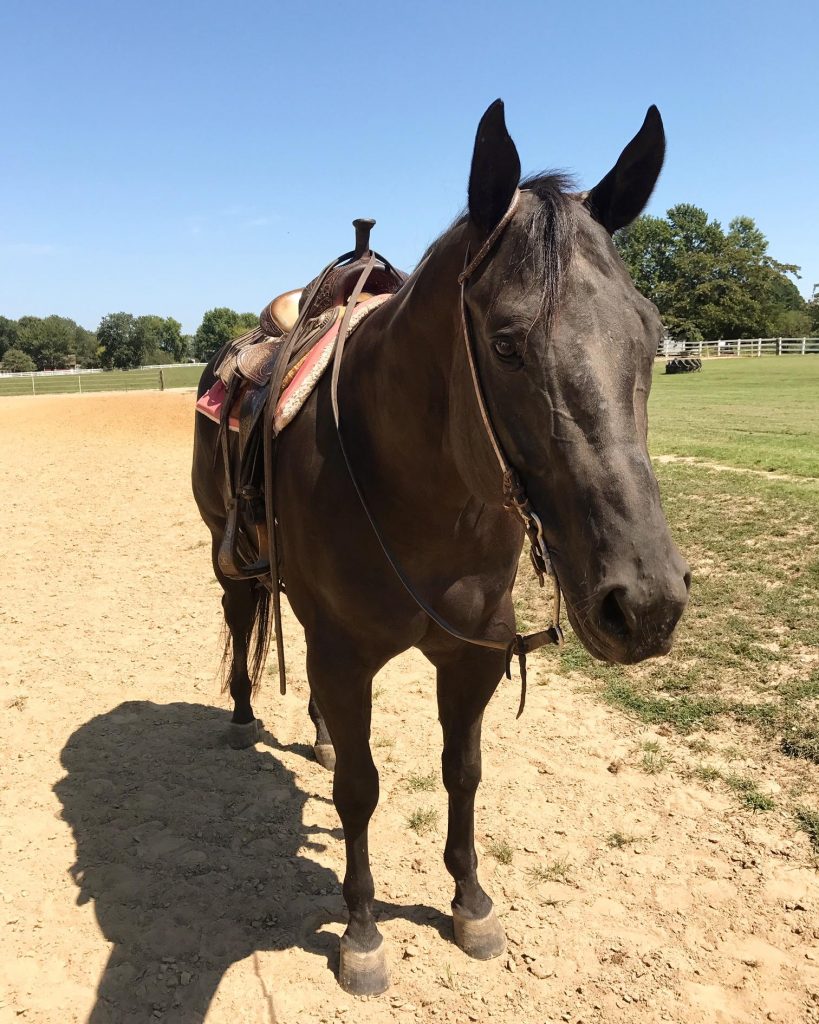 The ever adorable and patient Speedy. Photo by Meagan DeLisle

Speedy was obviously used to toting around beginners (Marty warned me if I stopped steering he would slowly make his way back to the barn and I immediately knew after his second try to prove her right that I was going to have to start steering or look hopeless) and allowed me to make several mistakes with only a few flicks of his ears.

Jon came out and joined me in the arena on a beautiful bay mare with a stop to die for. He was a fantastic instructor: very goal oriented and patient as well. We worked on jogging slowly, then jogging out and I had the opportunity to show off my posting skills which was the only point in the day that I felt like I knew what I was doing. Afterwards I got to lope, which I must say is very comfortable, and practice my lead changes. Speedy is a lead change demon and definitely told on me by frequently swapping to the correct lead and back to the wrong lead because my seat was ALL OVER THE PLACE. Eventually I figured it out… somewhat.

At the end we were working on some box turns (AKA quick footed and tight turns that can definitely unseat you if you aren’t ready) and quick stops. I couldn’t help but grin the whole time because I was having a blast and a half even though I was the most clueless one in the arena. Speedy got lots of loving after navigating the poles on the ground and getting us our first “PERFECT!” of the day.

All in all, I had a blast and to Wayne’s dismay ended the lesson talking about future horse budgets and my goals. I definitely intend on making this ranch riding daydream a reality, but for now on a small scale. I want to slide into it slowly and really learn what I am doing rather than go out and buy a horse who can win all the classes as long as I am tied to his back. After a while if I continue to love it and want to see myself go further then maybe I can invest in a little more horse, but for now I am going to take my time and shop around for an older, been-there-done-that-needs-a-little-maintenance, retired reiner to plod around on for fun.

Of course, I still intend on jumping — I could never give that up. Ranch riding is giving me the opportunity to become a more well rounded horse woman and have some fun along the way… at least that is what I tell Wayne in order for him to agree to it…