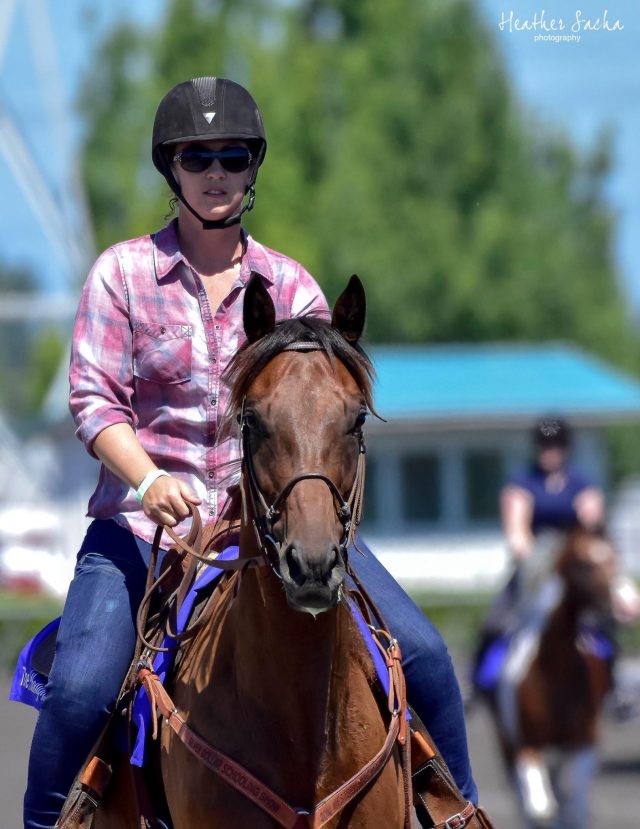 We continue on with Group B’s reflections of their time spent with their horses. With every journey will come hardships and tales of endurance. These horse and rider pairs have pushed through their own struggles to find the teamwork needed to retrain a racehorse in the limited time allowed for the Makeover.

“Retraining any horse is a process — it’s a journey.”

Lauren was eager to pick up the ride on Gift after Beth Stelzleni had started him down his road of retraining; however, she ran into a bit of frustration when she took over the ride on him at their first schooling show together. “Because of Beth’s great program, my expectations for Gift’s first show were high,” she admitted as she recapped on the event. Despite a less than astounding performance in dressage and stadium jumping, she was eager to see that he excelled on the cross country course and aspired to come up with the best program possible for the gelding, despite her self-inflicted disappointment in herself at that show. 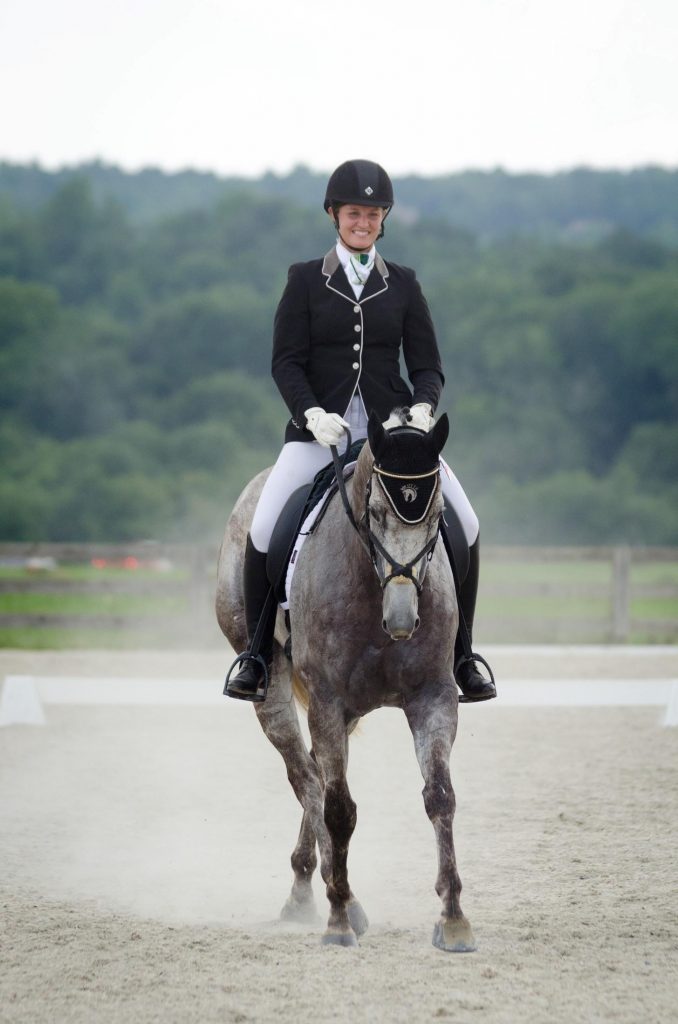 With a heavy focus on flatwork and finding the right tack to make Gift comfortable enough to shine, the pair have really come into their own. Lauren implemented a lot of grid work with smaller jumps so she could change direction and pace in order to keep Gift guessing. By keeping things fresh and exciting, Gift couldn’t get too eager and anticipate what was next. The next step was finding him a comfortable bit that helped alleviate any discomfort caused by his exaggerated parrot mouth.

The hard work and patience in the end as paid off. Gift is now bringing in scores in the 20s and the pair is heading to the AECs in Beginner Novice next week. Lauren feels Gift is ready to move up into Novice in September and she is so proud of the progress he has made.

“It’s taken months and months of consistent and intensely hard work to get us working in sync and as team mates.”

When Savannah first met Bentley, she admits she was a little scared at times. The gelding was pushy, mouthy and slightly aggressive. He would nip or bite whenever a moment came available and picking up his back feet was always a battle as he tried to kick out. She remained patient, taking her time to desensitize him to all of his triggers and she started to see a change in his behavior. “On the bad days he made me never want to see him again,” she said — but now the pair are a well-connected team.

Of course, establishing that ability to communicate with one another wasn’t easy. Now, after months of work she and Bentley get along so well that she can ask him to step up and perform under saddle and he does so without hesitation, but it didn’t start that way. Like many green, young horses Bentley can be a bit stubborn and Savannah found during many moments that she was training herself rather than Bentley. Despite her desires to try more and more, she held back and did what was best for the horse, working on herself as she trained her first horse ever, and the results have been astounding. 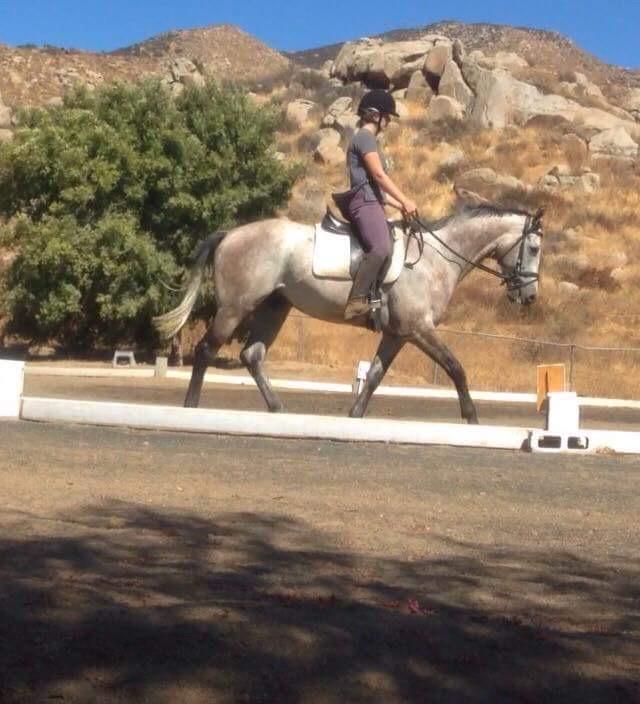 The RRP wasn’t in Savannah’s mind when she pulled Bentley off of the track, she was just looking for her next horse to work with for her own competitive career. It just so happened that he had no prior retraining and had raced and the RRP fell into the pair’s lap. She entered the RRP with the mindset that she was not going to rush Bentley and if he wasn’t ready then they would just withdraw. She wanted a horse that was happy, healthy, and would last a lifetime as she has no intentions on selling him. While she does admit she sees the progress of their fellow competitors and feels like they are somewhat behind them, she knows the patience she has put into him has made him as ready for the RRP as possible and she can’t wait for the both of them to do as best as they can.

“I started off this journey with all the right pieces falling into place at the right time. The horse, the motivation and the support to keep me moving forward. But there are the hurdles I’ve had to jump over to keep me on track.”

Recently, Heather and Henry attended the Ride for the Racehorses event at Emerald Downs that promotes Thoroughbred aftercare programs in Washington State. The four-hour drive one way might have seemed like a lot to some for her and Henry to only ride for an hour, but the event was more than worth it in Heather’s mind as it led the pair to their greatest achievement — an “aha” moment of great proportions. Henry’s former breeders and owners were all there to watch the horse they invested so much time and money into living out a wonderful life in a new discipline. Heather hadn’t had the opportunity to meet his track connections, before so attending this event allowed her to reconnect everyone who held this horse near and dear to their heart. They spent an hour walking, trotting, and loping around the track and not once did Henry revert back to his racing days as other horses galloped past the pair. 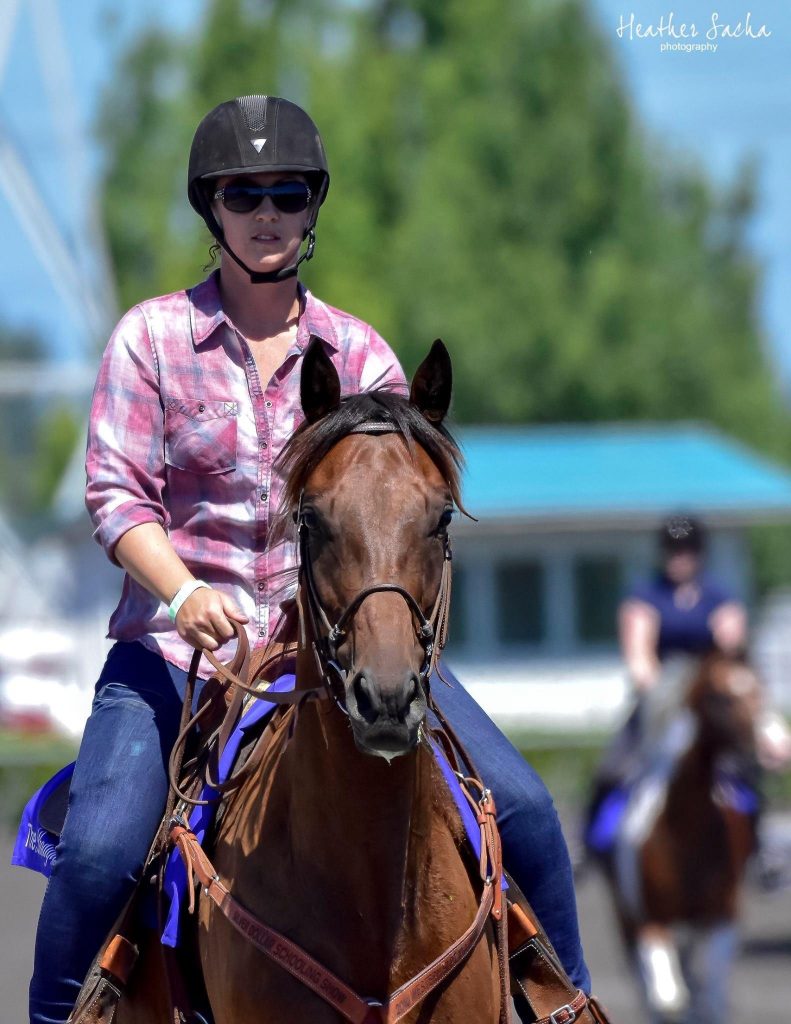 While Heather may be classified as a professional, she doesn’t have the opportunity to spend all of her time in the saddle. Balancing a full time job at a hospital, her enlistment in the National Guard and pet sitting has given Heather a few challenges when it comes to her schedule. Her biggest struggle so far has been finding the opportunity to put Henry on cattle, which are not readily available to her. She has set up dates to visit friends who have cattle, but her schedule has always seemed to get in her way. Thankfully, she has some small events and ranch time that she will be able to attend that will help get that needed exposure for Henry prior to the Makeover.

With a little over a month left before their trip to Kentucky, Heather and Henry are making all the last minute preparations needed for the Makeover. While she admits she is getting a little nervous, Heather knows the time she has invested into Henry and developing their partnership will pay off in its own way. She isn’t going for the placings, she is going to share the experience and friendships she has gained along the way and that is what the RRP is all about.

Time is ticking but all of our trainers seem to be more than pleased with the progress they’ve made, whether under saddle or just in the partnership they have built with their horse. None of their stories are the same, but they all lead to the same ending: OTTBs having purpose and a place off of the track in multiple disciplines. Countdown to the RRP: two months!