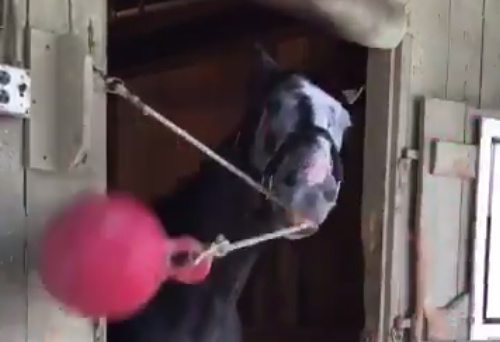 I recall fondly playing tetherball with my little brother when I was a kid — and I say “fondly” because having the advantage of a few years of growth, coordination and height on my sibling, I was much better at the game than he was. There were multiple occasions in which I literally knocked my poor younger brother right to the ground with the tetherball, and then promptly followed the age-old tradition of running like hell when he got up spitting mad.

That said, I feel like starting a game of tetherball with Tapwrit, winner of the Belmont Stakes and contender in tomorrow’s Travers Stakes at Saratoga, would give me a great big ol’ dose of karma:

Not only is Tapwrit a Classic winner…he's also got mad tetherball skills. #Travers pic.twitter.com/Rh9GhEL5qz

Whoa, don’t stand near Tapwrit’s stall, people! We’re happy to see this champion getting some enrichment time, which we’re sure he appreciates in his racehorse lifestyle.

Tomorrow’s Travers Stakes goes to post at 5:44 PM EST, with race coverage available on NBC Sports from 4 PM until 6.