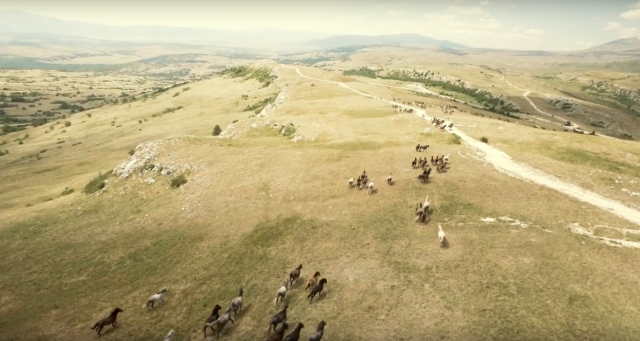 Hundreds of free-roaming feral horses wander the hills outside of Livno, Bosnia. Learn more about these animals and check out this awesome drone view!

Outside Livno, Bosnia, a unique group of horses roams the hills: these are the descendants of domesticated horses owned by local farmers and citizens, in some respects much like the mustang of the American west. The horses were originally believed to have been turned loose in the mid-twentieth century, with some sources stating that the advance of mechanized farm equipment started as early as the 1950s or as late as the 1970s in this particular part of the world.

The Bosnian War had an equally momentous affect in the early 1990s, with more horses turned loose to join the feral herd. Estimates now number the horses in the hundreds, though no formal count has been taken to the best of our knowledge.

Watch the Livno horses from the sky:

With no natural predators, the Livno horses’ biggest threat is mankind: some reports state that horses are occasionally captured and butchered for their meat, and it’s tragically common for the horses to be hit by cars in the winter when they move off the hills closer to the road. However, with increased attention from local government, it appears that progress is being made in protecting the Livno horses in their free-roaming status, with tourists coming in to view the horses.