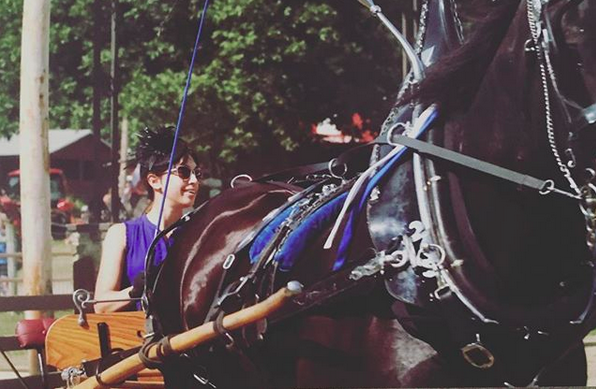 A tale told in GIFs. (If you’re way behind on Game of Thrones, consider this your official spoiler warning.)

This #ThrowbackThursday column was originally published in August of 2017, but managing editor Kristen Kovatch is showing her drafts again, so it’s time to take a second look!

I’ve drawn some (perhaps far-fetched) parallels between Daenerys Targaryen’s dragons and my draft horses Rocky and Randy in the past. There’s something distinctly dragon-like about draft horses: that sense of immense power that could crush you like a bug if they decide they don’t like you, combined with an almost otherworldly mystique you feel when you stand in the presence of such a large creature, combined with a gentleness that belies their size. The relationship I have with my draft horses is perhaps deeper than what I experience with my light riding horses, even though I rarely sit astride Rocky or Randy (and we certainly don’t fly around setting things on fire).

Last week, however, found me spending more time not with Rocky and Randy but with my family’s four Percheron drafts: Derek, Chuck, Randy and Ty. We were showing at our local county fair, which might be a relatively small affair in the draft horse world but has been hailed as one of the best county-level draft horse shows in this part of the country. It was an exhausting but rewarding week spent with our tight-knit draft horse community, showing our horses in halter and hitch classes and showcasing our farms in our tie-stall barns open to the public. 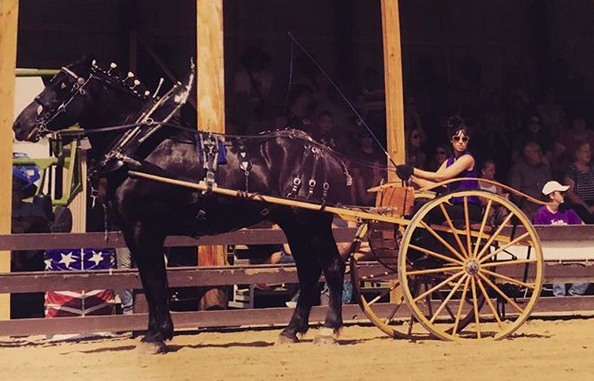 In the lineup with Derek. Photo by Bill Persons.

We had a great week in the show ring, never placing below third in any of our hitch classes — but it was the interaction with the public that really made the county fair experience unique. And, as I seem to tend to do on Mondays, I found solace in last night’s Game of Thrones. (Spoilers ahead.)

Give a girl the right fascinator and she can take on the world. Victory pass for Ladies Percheron Cart with Derek! Always a fun horse to show. Pairs to show this afternoon.

Thanks in part, I believe, to a bold choice in headwear after impulse-buying a fascinator, I won the Ladies Percheron Cart class on Thursday. One of my pet pleasures at this particular show is the victory pass, in which the winner is asked to take a little lap and then trot out the gate to the applause of the spectators, and our cart horse Derek never fails to impress.

A certain brief scene in Game of Thrones made me laugh at loud last night. It could very well have been filmed at the draft show.

Our victory pass was just as epic as this, I swear.

Derek is really quite a professional: he knows his job whether he’s driven single or in a team, he likes to perform and he will go as big as I ask without getting too hot, which is exactly the kind of horse I like to show (I’d much rather be urging a horse on than trying frantically to hold one back and keep him together). He’s got a great, broad foot and a naturally high action, which means after we’ve dropped the cart and are leading him back to the barn, he’s still really marching along. He’s not really a terribly subtle animal when we come up the hill to the show barn and head back towards the stall, especially with the show harness with its tall collar bouncing along.

Once we’re back in the barn and the horses are safely in their stalls, the aisle opens back up again for the public to wander through. We see a variety of reactions from people as they shuffle by and take a good look.

Some are rendered speechless by the sheer size of our geldings, who are in the 18-18.1 hand range:

Others inevitably ask if they can pet them, which we’re happy to help facilitate. Fortunately, our geldings are patient souls who tolerate some truly hesitant, nervous people who might be touching a horse for the first time in their lives:

“No, they only LOOK like they eat people, I promise.”

The ones I love the most are the people who are truly moved by these big horses, the same way I still am after working with them day after day. Those are the people who tend to linger in the aisle, just watching the Percherons, enjoying being in their presence and realizing that they’re experiencing something truly special.

Yeah, I recognize that facial expression.

Then there’s this inevitable conversation that takes place… usually a few times over the course of the week. Shown below: actual footage from the Warren County Fair.

This is usually the time people start edging away to go look at the sheep or buy a funnel cake. But I’m not ashamed of my draft horse love. From the old-timers who come through the barn and remember the team that their grandfather used to farm with to the young people who have never gotten to pet a real horse before, the county fair is an important service to the public, a chance to interact with animals and the people who love them and care for them.

If my big dragons can help open the door for just one more person to get involved in the horse world, then we’ve all done our jobs admirably. 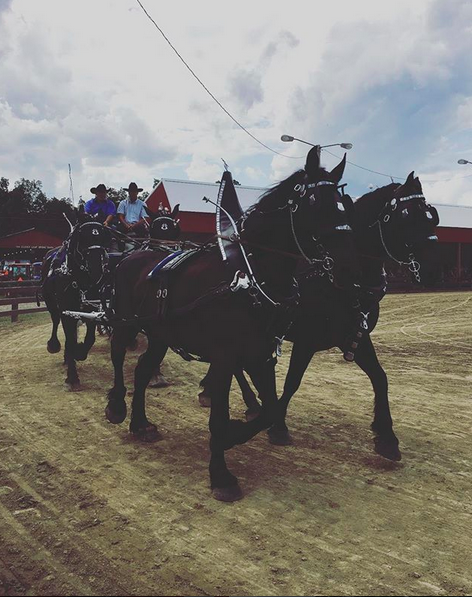