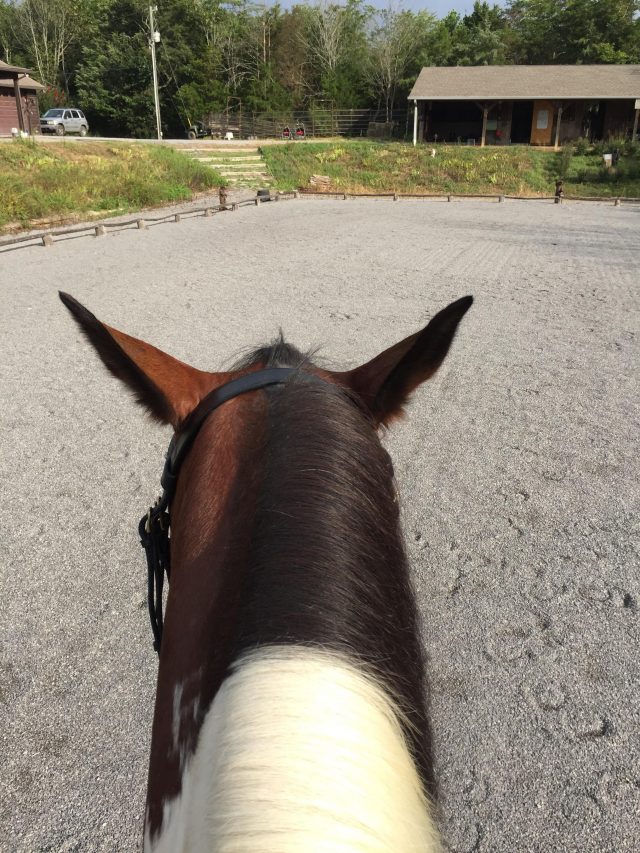 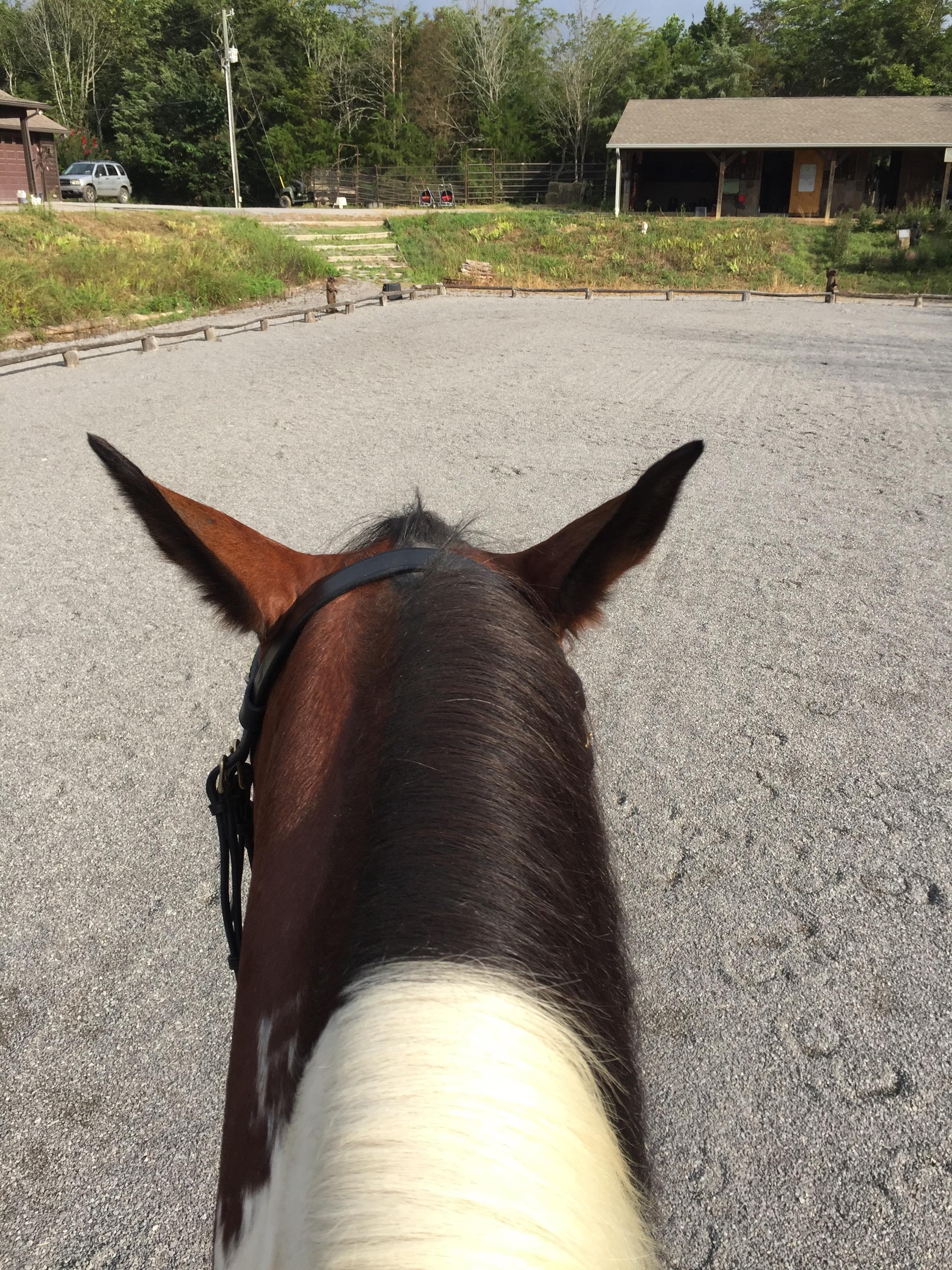 My favorite view in the world! Photo by Esther Roberts

With twenty pounds gone, I decided it was time to try on my tall boots again. Happily, they zipped right up!

For the record, I detest riding in tall boots. I was a trail rider for twenty years before discovering dressage, so jeans and paddock boots were my dress code for hundreds if not thousands of miles.

Once I got “into” dressage, I continued to ride in paddock boots for several years. I understand the theory that tall boots are protective gear for your legs. English stirrup leathers are thin enough to really pinch one’s calf if your lower legs are not secure.  (Voice of experience here!) But tall boots are hot and confining and require a lot of TLC to stay clean.

Tall boots are also expensive as the dickens, if, like in my case, no “off the shelf” size fits your very round calves and your very short legs. But I finally invested in an excellent custom pair a few years ago (hat tip to Vogel’s) and rode in them regularly until, a couple of years ago, they would no longer zip closed around my ever-expanding calves.

My biggest gripe with tall boots is the lack of “feel” I have on my horse’s sides when I ride in tall boots. This is not to express displeasure with Vogel’s at all – they are master craftsmen and build a fine product absolutely worth the price. My point is, as a “highly sensitive person” (HSP), I notice feel more than some folks do and I want to feel Kaliwohi’s sides clearly with my calves.

So… once I hit the “20 pounds gone” mark, I took my “yippee! I can zip them again!” tall boots to a local leather repair expert who does most of the tack repair in East Tennessee. Like the folks at Vogel, this gentleman is a master craftsman. I asked him if he could further customize my boots to suit me. I asked him to cut out everything on the “horse side” of the boot except the exterior leather panel.

This craftsman hesitantly agreed — he respects good workmanship and was somewhat reluctant to make any alterations at all.  This week, I picked up my modified-for-me tall boots and rode in them for the first time in over two years.

So what’s the nexus between tall boots and weight-loss? This: we are all individuals, and what works for one may not work for another.

My boots – despite being custom made — never quite worked for me. What’s the point of making a “once in a lifetime” investment in excellent equipment if it does not help me ride better? I never felt quite secure in my lower leg through three layers of leather. I felt like I was thumping my horse’s side to communicate with him.

With two of the three layers removed, I can easily feel Kaliwohi’s sides and quietly ask him to bend or flex or go forward. Success!

As this week’s photographs illustrate, Kaliwohi is making baby steps in his progress in learning to bend. He bends like a dream to the right; to the left, he is quite slab-sided and resists flexing his barrel.

I promised when I began writing this column that y’all could count on me for one thing above all others: honesty. No drama. No BS. Just the pure, plain truth of my journey to lose sixty pounds and train a four-year-old mustang from the ground up, literally.

I’ve included one photograph this week that clearly illustrates Kaliwohi’s displeasure in being asked to bend to the left. In the first picture, Kaliwohi is very UN-straight, with his nose to the right, his poll to the left, his shoulders tense, his barrel unyielding. He is using a “serpentine” suck-back tactic to try and avoid going forward with bend. 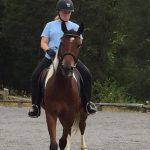 Kaliwohi resisting bend to the left. Photo by Cathy Keeton. 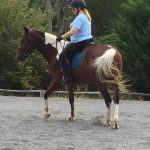 Kaliwohi beginning to bend through his barrel. Photo by Cathy Keeton. 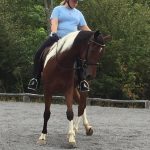 Soft bend throughout the body to the left. Photo by Cathy Keeton.

As you can also see, I keep the cavesson loose to the “2-fingers” rule so Kaliwohi can open his mouth and express himself when he is unhappy. I want Kiwi to resolve any head/poll tension by working his jaw rather than locking up his poll due to a clamped-shut mouth.

In this schooling session, we worked on 10 meter circles in both directions, up and down center line, C-A and A-C. We’ve been doing this for a couple of weeks now, because I do not want gaping holes in his foundation. Until he willingly bends both directions at the walk, I’m not going to rush into more complex figures at the trot.

Kaliwohi likes to use jigging/trot as a speed evasion to bending, thus much of our work is at the walk these days. I know he can trot rhythmically. We began canter a couple of weeks ago and he enjoyed the canter work very much. Speed is not a problem for my mustang. Bending is the issue. So we don’t work on speed; we work on bend.

Because whatever resistance his body has at the walk will be more pronounced at the trot and canter.

As long as it takes.

As much as possible, I work on bend without contact, unless Kiwi needs contact to help reinforce the bending leg. Even then, I hold the rein and let him walk into it if he resists bending. I do not try to pull him around my leg, but, rather, I set a boundary with the inside rein and let him find that boundary if he tried to evade the bend.

As you can see by the third picture, my good-hearted mustang was bending beautifully to the left, with a through inside hind and a soft, relaxed spine. We then expanded the circle diameter back to 10 meters.

Each ride it takes him a little less time to get soft.  And each ride he gets a little more solid in his understanding.

The training is the success. Measured in tiny improvements, sometimes. One ride at a time.