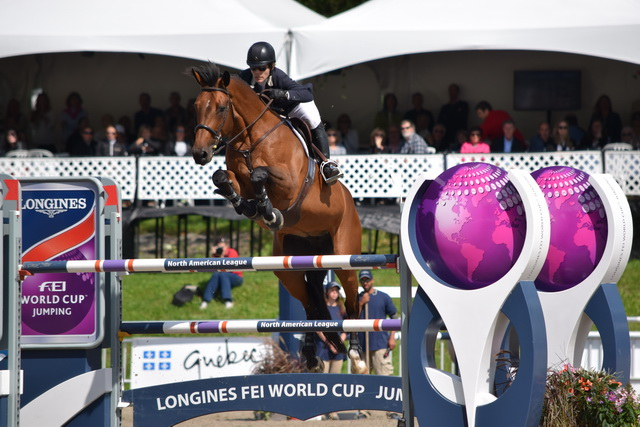 Your first World Cup leg win in front of your friends and family on your own horse? That’s a real-life fairy tale, folks. At 38 years old, Isabelle Lapierre won her first World Cup Qualifier on home soil and in front of friends and family for an overwhelmingly emotional victory aboard her own Cescha M. She took the win in the opening leg of the 2018 season of the FEI World Cup North American League, and will be looking to add to this victory and find herself in Paris come next April for the World Cup Final.

That moment when you realize you just won your first world cup qualifier!

It was a very scrappy ride with a couple heart-stopping moments as Isabelle cut out strides and rattled a few poles, but their gutsy ride secured a victory she and her friends and family will remember for years.

“It can’t be better than that. In front of everyone that knows me since I started riding here, and everyone was jumping every jump with me. I think that’s why I went faster!”

Isabelle brought Cescha up the ranks herself over the past three years, and is her one and only FEI horse. Moreover, it’s only Isabelle’s second horse to make it to this level for her: Her previous top mount Vicki Vale last jumped in a CSI 4* in 2014.“She had a very good year, and she’s always trying to win,” Lapierre said. “We built her up, and she’s just improving every year.”As to her plans for accumulating points and working toward Paris, Isabelle admits that’s a whole new step in her journey as well as Cescha’s.

“The whole year, we planned the shows where we wanted to be ready for here to see what she would do. Now, we have to think differently, because we know she can do that next step. Now, the plan will be built around doing the next step.”

If you had thoroughly given up on a local girl with her one dream horse going all the way, don’t throw that magic ticket out just yet, jumping fans. We’ll hope to see her and Cescha at a few more qualifiers before it’s all said and done, and hope for a Cinderella Story in Paris!