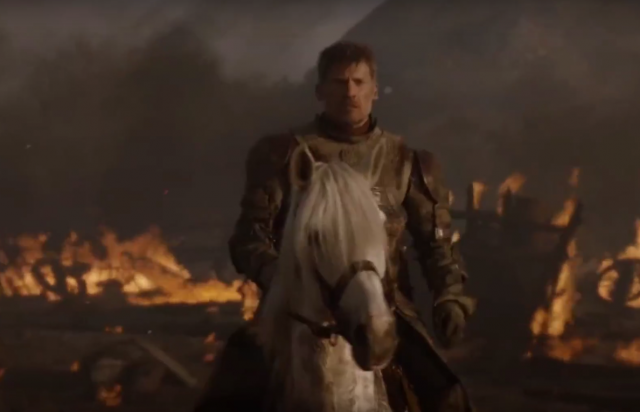 There will most definitely be spoilers — this is your official warning.

Last night was full of highs and lows if you’re a horse person. As is fairly typical for Game of Thrones, a show notorious for refusing to sugar-coat most of its death scenes for human and animal alike, it was not a good night to be a horse.

Tragically a lot of horses ran into spears, got limbs chopped off by scimitars and were roasted alive by dragon breath. But prior to their mercifully CGI-designed demises, they did a lot of total badass things as well, because Game of Thrones. (What’s even cooler is that a lot of those horse stunts are in fact done with real horses and real riders — more on that later.)

Yes, I know it’s fictional TV. But that doesn’t stop me from being simultaneously impressed with these horses and totally exasperated by my own.

The Dothraki horde can unleash that raise-the-hair-on-the-back-of-your-neck war cry as they charge into battle.

Okay, obviously GIFs are silent but if you saw this episode you know 100% what I’m talking about.

My horse gets anxious if people raise their voices.

These baller horses are totally cool with a DRAGON flying overhead.

My horse shied at a turkey coming out of a treetop once.

The GoT horses literally run through fire.

My horse doesn’t like it when the ground changes color.

I call it a good day if I can canter across the field on the same lead I actually asked for.

Jamie Lannister’s ill-fated yet tragically beautiful suicide charge across this shallow lake on his trusty white steed who would do anything for him.

One of my draft horses leapt a stream once… taking the cart he was hitched to along for the flight.

Oh, look guys — they DID include my horses. It’s those three, running away with their lead ropes still attached.

In all seriousness though — I give major kudos to the horse wrangler team and stunt coordinators of Game of Thrones, who time and again raise the bar for what we can expect to see from equine stunts on the screen. Check out this behind the scenes video — fast forward to the 8:30 neighborhood for the horse segment. A lot of those stunts are in fact real, and I’m impressed with the equine actors, stunt riders and the whole production team for putting this many-layered epic scene together.