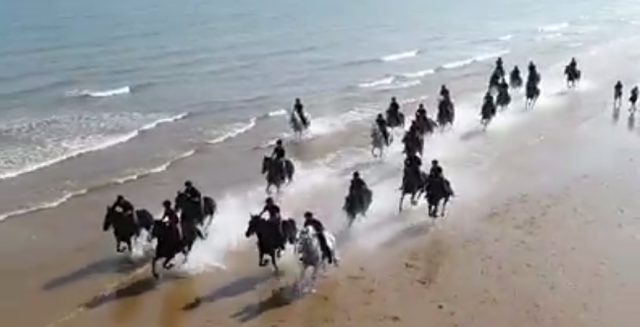 Everyone is hitting the beach this summer — even the ceremonial Household Cavalry.

Visitors to Holkham Beach in Norfolk might have been lucky enough to catch a glimpse of the famous Household Cavalry… but not in their typical ceremonial duties. The Household Cavalry takes time each summer to train in Norfolk, including forays to the beach for a little sun and sand.

As stated in the video, it’s not purely for fun… but we find it hard to believe that the riders and horses weren’t enjoying this experience.

The Household Cavalry Mounted Regiment is perhaps one of the most high-profile mounted units in the world, primarily used now for ceremonial purposes: the famous twice-daily ceremony of the Horse Guard is perhaps the best-known example, but the traveling musical ride is also a banner event wherever it’s performed.

The Household Cavalry also has front-line combat duties in an unmounted capacity, and most members of the Mounted Regiment will serve on both units.