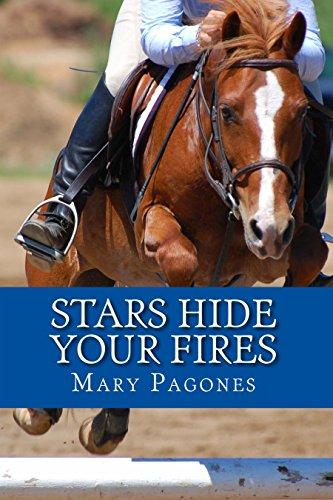 An eventing novel by Mary Pagones.

Mary Pagones wastes no time in Stars Hide Your Fires, the third in her Fortune’s Fool series: in just the first chapter, first-person narrator Simon O’Shaughnessy is sidelined by surgery so his boss Freddie Whitechapel takes over his ride on a mare named Pearl — a little twist that proves to be fateful when Freddie is killed in a fall on the cross-country course. The novel follows Simon in the aftermath as he supports Freddie’s widow Cheryl (a professional show jumper) and prepares to ride Freddie’s horse in the Eventing Showcase in tribute to his fallen mentor.

Much in the same way that contributing book reviewer Eileen Cody discovered when she read the second in Pagones’ series (Quick Bright Things Come to Confusion), having read the previous installments is probably helpful but maybe not totally necessary — it’s pretty easy to come up to speed on the characters and the lay of the land in Simon’s world, though someday I’d like to read all of the novels in order to see what I may have missed in the development of certain relationships. Simon states in the first chapter of Stars Hide Your Fires that Freddie “was the one person who was…pretty much my whole world,” which is a sentiment that I might not have picked up in this book alone had it not been explicitly stated.

Despite the potential for a really heavy book dealing with some intense subject matter in the eventing world especially, this book is an easy and entertaining read. Simon spends more time pursuing a new love interest in amateur jumper Phillip Stone and making snide observations about the hunter/jumper world than he does grieving for Freddie. Pagones clearly knows what’s up across multiple disciplines, from casual name dropping of big-name riders down to the small details of show barns and the horse show industry.

Pagones indeed covers a lot of ground in this novel, spending time directly or indirectly on the party scene of the horse show world, the relationship between riders and owners, family and homophobia — but the issue at the heart of the story is set up to be the struggle of Simon to defend his beloved sport of eventing in the wake of his mentor’s untimely death.

The novel sets its own stage to tackle this critical, hot-button issue through the point of view of an individual who is emotionally, mentally and physically invested in the sport, but unfortunately the book fails to truly reconcile this issue in a way that feels satisfying. Simon never offers the validating defense of eventing that I was waiting for from the time of Freddie’s accident until the last page. The novel’s final scene of Simon visiting Freddie’s grave feels a bit like an afterthought, an emotional journey taking place all of a sudden all at once in a way that feels a bit contrived, rather than the end result of an ongoing process we’ve experienced throughout the story.

This tall order aside, Stars Hide Your Fires is worth the read for equestrians with an eye for details — fully immersed in an accurately if sometimes judgmentally portrayed horse world, this novel is sure to please.

Stars Hide Your Fires is available at Amazon.