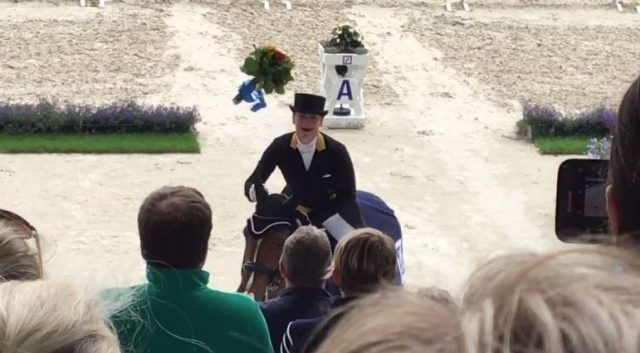 This Dressage Queen is killing that stereotype about stern German women once and for all.

German Dressage rider Isabell Werth is one of the most decorated equestrians in history, and she came out in full force once again in Aachen Germany this past week for the Nations Cup and individual events. Aside from the general awesome winningness that she is known for, she was also a total charmer in the prize giving ceremony. Allow me to demonstrate in the most Horse Nation of ways, via GIF.

First, she decides to very magnanimously toss her winning bouquet to the adoring German crowds, but it turns out that Isabell is not as good of a pitcher as she is a dressage rider.

But she shakes it off, and decides to show off her gymnastic jumping exercises by jumping this nice one-stride made of arena decor and the menage itself before taking her own magnificent victory gallop.

And because a true champion never, ever gives up, she circled back on that old bouquet business after her gallop and this time gets those darn flowers into the first row. Attagirl, Isa!

You can see the full video of the prize giving with Isabell’s victory gallop starting at around the 9:30 mark below.

Why Isabelle Werth is the best! Watch at the very end, coolest dressage rider ever!

and there’s another good shot of the affair here:

Isabel Werth jumping out the arena to throw, her bunch of flowers, to the crowd,it hit the wall, so funny, came round again, threw it then jumped the dressage arena, on her champion dressage horse!! She is beyond funny!!