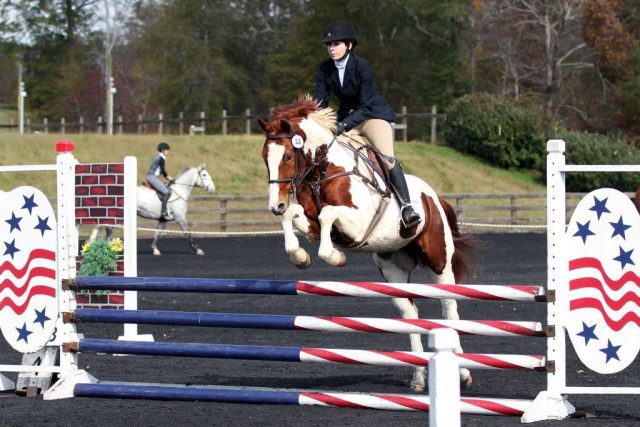 Ainsley Jacobs and her horse JJ are slowly recuperating from a ligament injury — so she’s throwing it back today to the end of 2015, when she and JJ made their Novice Level debut!

Adult amateur event blogger Ainsley Jacobs has been chronicling how she finds the takeaway lesson from the good, the bad and the ugly in her equestrian experience. Her horse JJ has been rehabbing from a ligament injury for a few months, so during his layoff time Ainsley is revisiting earlier lessons in her experience. The American flag: from our worst enemy to our best jump, we’ve come full circle! Photo courtesy of Ride Heels Down.

The Beginner Novice height of 2’7″ has been easy for us for a long, long time – it was everything else that was a struggle. Now that we’ve found our groove, I decided it was time to screw things up again by moving up to the Novice division of 2’11”.

The next event on our calendar was another at Poplar, and I won’t lie – the idea of doing my first off-farm Novice jumper round with the “scary” American flag jump was a bit intimidating. I hoped my plan would work out well, and our first Beginner Novice round would help things go smoothly.

We had planned to school our Novice cross country course the night before, but a series of unfortunate events had us arriving at Poplar well after dark. As it wasn’t safe to ride, we decided to postpone that activity until after the show.

We started the weekend off with our dressage tests. Yes, tests. Plural. Since I was doing a “warm up” Beginner Novice CT, I had to ride my Beginner Novice Test A first. JJ was half asleep, and it was definitely not our best work. If I hadn’t been focused on just getting through a Novice jump round, I would have been really disappointed. We scored a 41.05 – yuck.

Our second dressage test of the day, Novice A, was even worse. They were running behind on ride times in dressage, so JJ got “stuck” in the warm up arena for far longer than he was okay with. As a result, I had a resistant, cranky, and frustrated horse when it was time to enter at A. As usual, we got through it, but it was so bad that I actually started laughing at several points during the test. We finished up with a 42.61 but that just means there’s plenty of room for improvement later on!

For our first off-farm Novice round, I expected to have to work a lot harder than I did, but JJ gave me such a wonderful course that it was actually one of the most fun rounds I’ve ever had. We nailed every single fence, had great distances, and didn’t touch a thing! We even had a perfect jump at the no-longer-scary American flag. I am SO incredibly proud of him!

At the end of the day, we went out to school our first-ever Novice cross country course and it was INCREDIBLE!! There were a few questions that JJ wasn’t sure about and I could feel him want to hesitate, but I just added a little leg and gave him the confidence he needed to get over the jump. He cleared everything on the first try, and it was a lot easier than I expected! I can’t wait to do our first real Novice 3-phase in January!

If you want to move up a level, go for it! But remember, there’s no rule that says you have to do it within a specific period. Take your time, and move up only when you feel too comfortable at your current level.